Seeing as they've been the biggest names in comedy for the better part of a decade now, Will Ferrell and Zach Galifianakis had to star in the same movie at some point, so why not now, when political sensitivity is just starting to percolate? And we could all use a break before the real polarizing insanity begins.

Their comedic styles practically read like a president/vice presidential ticket: Ferrell quarterbacks as the big gun leading the ensemble, while Galifianakis is the loveable oddball who shows up to support the headliner, if not outright upstage them. Putting these two together is like getting a licence to print money, so if anything, waiting to do a project about a no-holds-barred congressional seat race at the prime of its relevancy should only make this meeting of comic titans even more of a success. 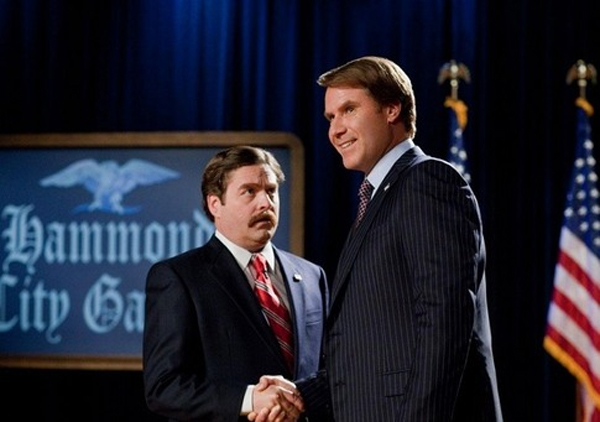 So why is The Campaign so much less than the sum of all those hallmarks of a sure-fire hit? It's not as if director Jay Roach is unqualified for this sort of material. When he's not shooting R-rated comedies, he's busy making made-for-TV political movies on HBO. And The Campaign does deliver on the brand of jokes you'd come to expect from both its stars, with Ferrell playing another inexplicably successful but barely contained man-child, and Galifianakis doing a variation on the preciously optimistic dimwit archetype he does so well, this time with some heinous sweaters and a pair of Chinese pugs to keep him company. The dominant issue might be that the story is designed to keep the pair apart as much as possible. The film opens with Ferrell's Cam Brady campaigning for reelection as a North Carolinian congressmen, even though all he's had to do in the past is just show up. His platform is simple: America, Jesus, and freedom. When a misdialed phone call and a particularly salacious voicemail land Brady in hot water, his corporate backers (Dan Aykroyd and John Lithgow) start looking for a replacement, which they find in Galifianakis' Marty Huggins, a small-town businessman whose eccentricities can be easily confused for folksy charm. With an opening quote from Ross Perot reminding viewers that, "politics has no rules," plans for a clean campaign are abandoned almost immediately by both parties, as Cam and Marty pander shamelessly while on camera, and orchestrate increasingly ruthless attacks against one another when off. With Ferrell and Galifianakis only interacting during debates and public events, it's the supporting cast they have to bounce of off when out of the public eye, including Brian Cox as the Huggins patriarch, and Jason Sudeikis as Brady's campaign manager. There's also Dylan McDermott Huggins' campaign manager, though unless there's some secret inside joke at work here, giving his character the same name as the dentist from Seinfeld is just weird. 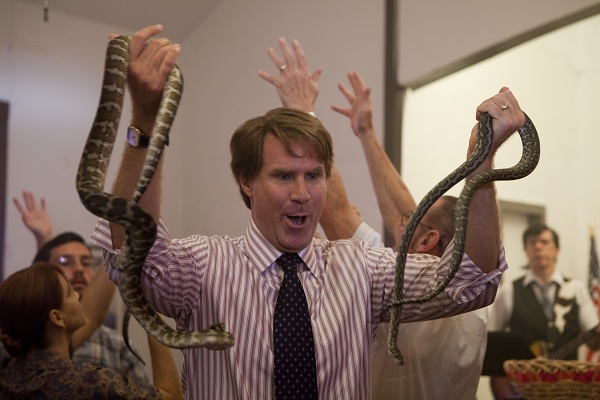 While the backup players do fine, The Campaign too often feels like a series of missed opportunities. The breakouts for both leads (Anchorman and The Hangover) had stronger stories to tie together what were essentially sketch compilations featuring a very talented cast. Here though, the plot counts down to the all-important election without actually building toward it. It's practically one great big montage of scenarios and premises related to campaigning interspersed with direct attacks and retaliations against one candidate or another, and the repetition grows more wearying every time The Campaign hits the same note of politicians doing anything to please voters.

Certain jokes in and of themselves work just fine. There's a kinda clever, kinda offensive take on the Southern mammy stereotype that gets some good mileage. And accidentally punching a baby is just inherently funny, as is when they return to that gag, which is even funnier. But they're the few noteworthy jokes sprinkled into a script that relies too heavily on formula in the sketches: get some expletive-peppered exposition out of the way, then establish a gag where everyone can shout out escalating non sequiturs to see which one will be the scene-ender. It's tiresome, and doesn't make the most of either the subject matter or the rating. Why bother getting an "R" when one of the biggest laugh lines comes from an insult that was safe enough to be used on 30 Rock years ago. 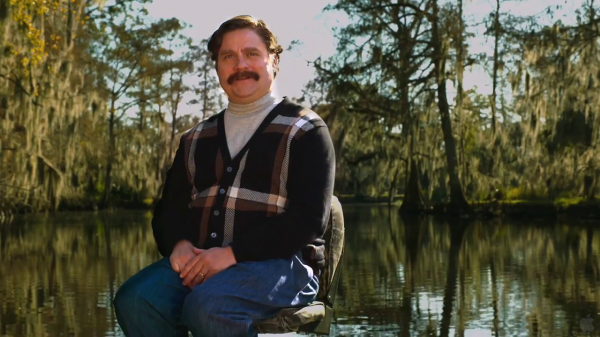 The hit or miss humor would be more acceptable if there were something else to fall back on, but as satire, The Campaign is mostly toothless. The only real political sentiment is the broad acknowledgement that big money has become the real source of electoral power, and the evil industrialists pulling everyone's strings are called the Motch brothers, so if you've seen Wisconsin in the news in the last year, you get the joke. Their villainous plan to construct a child labor factory in the heart of North Carolina is a little at odds with the frequent product placement for Apple, with the message becoming less like "child labor is bad," and more like "child labor is bad so long as we're aware of it."

Though amusing in spurts, The Campaign doesn't convert enough of its huge potential into a memorable return, floating by on the strength of its cast when it had the chance to soar. For a film that wants to idolize the positive change elections can have, The Campaign's inability to deliver fully on its own promise seems all too sourly familiar. Rating: 5/10

Steven thought: "The Campaign is not shy about making its jab at the corporate interest-driven nature of the political machine, as the script goes for the over-the-top, exaggerated approach to satire, imagining how far two candidates would go to sabotage each other. To be fair, however, it establishes early on that it's not going to play by normal rules. Huggins and Brady exchange blows in what feels like a collection of "what are the worst things you could do while running for office?" scenarios: adultery, punching babies, drunk driving — you name it. They simply pile on top of each other and rather quickly make the entire film so far-fetched that it loses the effectiveness of whatever satirical sting it had intended. Then again, you don't go to see these two actors in a comedy if you're mostly looking for razor-sharp political commentary. They are in top form, and the freshness of the political arena in terms of being used in R-rated comedy assures the jokes a certain degree of cleverness." Rating: 6.5/10