The Cape has finally disappeared with his last puff of smoke.  Two weeks ago NBC aired the last episode of The Cape that would be televised, but they’ve released one final episode, Endgame, online. But don’t be fooled by the title, Endgame isn’t the series finale, it’s just the episode they were shooting when NBC pulled the plug.

This episode revolves around Marty, Vince’s partner from back when he was a cop.  Even though Marty tried to blow up the city in the pilot episode, he’s supposed to be a sympathetic character now.  He confesses that he’s “No hero”, but still the guy’s been henching for a supervillain for the past couple of months, and now the audience is supposed to feel sorry for him?  Making matters worse is that we spend the entire episode focusing on how Marty can bring down The Cape’s nemesis, and clear Vince’s name, then Marty decides to be all noble and sacrifice himself to save Vince.  The whole damned point of the episode is that MARTY MUST SURVIVE, then the stupid jerk goes and gets himself killed. 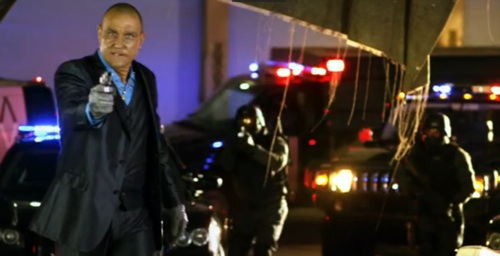 Of course before we get to that tearful death scene, we have to trudge through The Cape’s usual convoluted plot and nonsense.  All of this arises from the fact that Marty can prove that mastermind Peter Fleming is really Chess.  But doesn’t that invalidate the various episodes that were devoted to The Cape trying to keep Fleming alive?  Remember back in episode four when The Cape had the chance to let Fleming get run over by a train, but didn’t because The Cape needs him alive?  Well that doesn’t make any sense now that we see that Marty could save the day.  It also means that The Cape spent an entire episode protecting Fleming from Meena Suvari, when the whole ridiculous situation could have been resolved by just talking to Marty.

Another massive plot hole in this episode is that the Carnival of Crime apparently has a safe house, and a means of getting out of town for families in danger.  Yet, the entire show is based on the notion that Vince’s family will be in danger if his identity is discovered.  Couldn’t they have just gotten Vince’s family out of town ten episodes ago, then killed Chess, and asked Marty to explain that the whole thing was a big misunderstanding?

But that would mean that they had no show, so the producers crammed these characters through ten implausible episodes and here we are with a worn, battered cape bristling with loose plot threads. One of which is the mysterious sexy female assassin who tries to kill Marty outside the courthouse.  Alas, we’ll never learn about this cunning murderess who’s brilliant assassination plan is to walk up to a guy in front of a courthouse and shoot him in full view of an army of cops and news reporters.

Fortunately, The Cape was on hand to thwart the attack.  He’d been warned that Marty’s bail being posted “Sounds like a set up”, so he charged right in.  This seems to happen a lot on this show; The Cape finds himself presented with an obvious trap, someone spouts “This looks like a trap”, then The Cape walks right into the trap.  In fact this guy’s battlecry is oughtta be “This looks like a trap!” 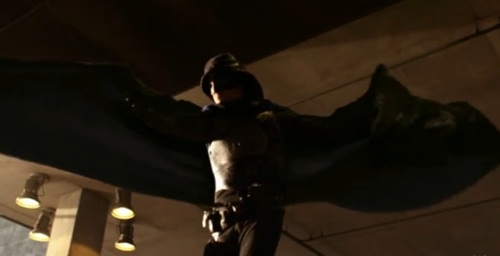 Another big problem with the episode is that Marty tells Vince’s wife Dana that Vince was really innocent after all.  The only reason that Vince dressed up as The Cape in the first place was to protect Dana and their son.  You’d think that as soon as the cat was out of the bag, Vince would reveal himself to Dana.  Alas this didn’t happen, and Vince continues to allow his wife to think he’s dead.

There are plenty of other problems, like Marty’s daughter bringing her cellphone to the safe house (You’d think a paranoid super-hacker like Orwell would check for that), and of course once The Cape discovers that they’re being tracked by that phone, he could have used it to lure the bad guys away, but, frankly The Cape just isn’t very bright, and we’ve learned to expect no better from him.

Ultimately we’re left with question of why NBC even bothered putting this footage up on the internet.  It answers none of the questions that viewers might want answered, and actually opens up a bunch of new loose ends as well.  Rather than being an endgame, this episode is more like a final insult.