The Cape – Goggles and Hicks

This week The Cape tries to take a day off, but his nemesis Peter Fleming has other plans!  Fleming hires a pair of assassins named Goggles and Hicks, and this marks the first time that that The Cape has fought a villain with a two-syllable codename.  Goggles!  Previously he’s battled Chess, Scales, Cain, and Dice.  I’m not saying that NBC is pandering to an audience of monosyllabic morons, but I don’t think The Cape is going to fight a villain named The Antidisestablishmentarian any time soon.

Right away, we run into problems with the story.  Fleming meets with two expert assassins who tell him that they always observe their target and wait until “the moment is right” before killing the victim.  Fleming immediately tells them to do it in 24 hours and offers to pay double their usual fee.  Now, Fleming is not only supposed to be a criminal mastermind, but also the head of a successful company.  How could he be either of those when he ignores the advice of expert consultants and pays people twice what they ask?

The show requires viewers to just accept that Fleming is wealthy and brilliant, regardless of whether or not it makes any sense, so let’s just discuss how Goggles and Hicks create a cunning plan to lure The Cape into a meeting with Fleming’s rival, Scales.  Now the proposed meeting is obviously a trap.  Even an idiot like The Cape immediately says “That sounds like a trap” when his hacker sidekick Orwell tells him that she’s been contacted by Scales. Orwell assures The Cape that the message came from the right IP address, so The Cape lumbers blindly into the blatant set-up.  Apparently, Scales was also tricked into attending this phony meeting, which reminds the audience that Scales is kind of a dunce too.  When Goggles hacked Scales’ IP address, maybe that’s just because Scales has an unsecured wi-fi hotspot in his hideout, or uses “PASSWORD” as the password on his AOL account.
Anyway, once The Cape has stumbled heedlessly into danger, we see Hicks shoot him with a tracking device that will allow Goggles to track him.  This begs the question:  Why doesn’t Hicks just shoot him with a regular gun?

I have to stress this.  The hired assassin has his target right in his crosshairs, but uses a high-tech tracking chip, instead of just killing him.  You would think that a professional killer might carry some sort of firearm that discharges lead projectiles- just for this sort of situation!

Of course the reason that all of the characters constantly do implausible and stupid things is that the writers need for it to be this way.  They wanted to write an episode where The Cape gets stalked by a pair of quirky, high-tech assassins who learn all of his secrets, so that’s what happens in this episode.  No matter how many plot holes had to be ignored, that tracking device was going to end up on The Cape, even if they had to write in a scene where one of the Olympian gods descended to Palm City and nails the thing to The Cape’s forehead!

Getting back to the quirky villains of the week, these guys are overt mockeries of comic book and video game fans, which I presume is the target audience for this show.  The writer and director are insulting the only demographic which might have been willing to sit through an episode of their show, outside of small children.

I’ve pointed out in previous reviews that The Cape would be better off it were made more child-friendly; by which I meant that it should have less violence, less sex, more humor, and an earlier time slot.  Which brings me to the next problem with the episode: A new cute kid.  This week, a new child cast member was added.  That's always a bad sign for a series, and this kid is going to do for this show what Cousin Oliver did for The Brady Bunch. 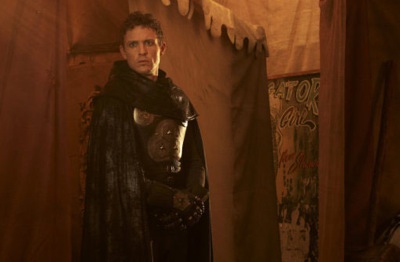 Just about every episode peaks with a scene involving The Cape’s son, Trip.  Again, this week Trip’s scenes are the best part (At least the ones without his new pal).  Let’s just ignore the fact his mom leaves him alone, playing in front of an open widow, without a baby sitter.  But, I did enjoy one of Trip’s lines, and I’ll give the show credit where it’s due; it entertained me for a least a few seconds, without resorting to cheesecake.

Despite the glimmer of amusement I found here, The Cape has taken a step back from last week’s episode, which wasn’t exactly Must See TV to begin with.  A big two-part storyline is starting next week, so let’s hope that The Cape’s battle with a new supervillain will mark a turn around for the show.  See our review of The Lich: Part 1.