What might be the final televised episode of The Cape aired tonight, and what a finale it was!  This week our hero had to go undercover as a mad bomber in order to infiltrate the lawless scum that choke the gutters of fair Palm City.  The Cape’s nemesis Chess has struck a deal with the reptilian reprobate Scales, and the two of them are dividing up the city like slices of a delicious cake.  Only Earth’s mightiest hero can stop them!

Scales decides to hire an Australian assassin named Razor to kill The Cape.  Conveniently, absolutely no one, anywhere has ever seen Razor.  So once The Cape and his band of heroic carnies learn of the villains’ plan, they hatch the cunningest of schemes; they decide to kidnap Razor and then The Cape assumes his identity.  Do note the performance given by David Lyons in this episode.  He does an Australian accent so authentic you’d think he was born there, and that’s because he is from Australia.  He’s been doing an American accent for all the other episodes, and the producers decided that Razor should be Australian just for this little gag. 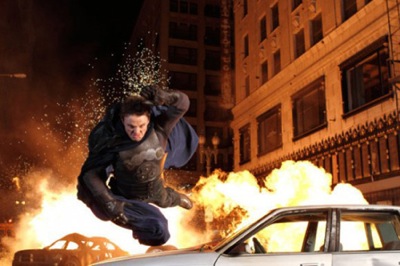 Also note just how easily Vince and his pals manage to capture Razor; this guy is supposed to be some sort of master assassin, who has concealed his identity from everyone, yet he doesn’t even lock the car door, let a lone have some sort of contingency plan for this sort of thing.

On the subject of the new villains introduced in this episode, we meet a guy named Poker Face.  Poker Face is disfigured on one side his face, exactly like Two Face from the Batman comics.  Of course, Poker Face is scarred on the RIGHT side, so I guess that’s enough for NBC to avoid a lawsuit.  I used to think that Chess was a lousy villain, but now The Cape is up against a guy who needs a henchman to put in his eye drops every scene.

As for Chess, he spends the entire episode whining to his therapist.  Let me just repeat that:  THE MAIN VILLAIN ON THIS SHOW SEES A THERAPIST.  I’m trying to imagine Doctor Doom or Darksied discussing their emotions with a counselor, and I just can’t picture any sort of real supervillain behaving the way that Chess does in this episode.  A real supervillain drives his psychiatrist insane, then turns her into a henchgirl who runs around in a sexy clown outfit. 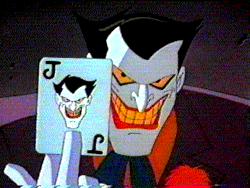 While Chess is sorting out his emotion issues, The Cape is battling the terrible trio of Scales, Poker Face, and Razer.  Although instead of battling them, he’s really just pulling off petty little pranks, like switching Poker Face’s eyedrops with turpentine.  That actually makes The Cape come across as kind of a jerk, rather than some sort of hero.

Eventually the episode lumbers its way to a climax of sorts when Scales has a longthy scene where he serves some cake to his henchmen.  However THE CAKE IS A LIE!  It’s all part of a clever plan to try to catch The Cape off guard.  Being the halfwitted superhero that he is, The Cape does get caught off guard, then he gets beaten senseless and water-boarded by the bad guys.

And thus ends the grand saga of Vince Faraday, AKA The Courageous Cape.

The Cape was originally picked up for thirteen episodes, but as soon as the executives at NBC actually saw the show, they promptly halted production at ten.  Tonight’s was the ninth episode, but next week The Event is returning to take over the time slot.  This means that the tenth episode of this series may never air!

There are so many loose ends that simply must be addressed in order for the cultural zeitgeist to continue evolving.  Will Vince ever clear his name?  What drove Orwell crazy?  Is Peter Fleming’s alternate identity Chess gone forever, or could the Chess entity somehow be responsible for Orwell’s behavior?  What is Max Malini actually training Vince for?  Most importantly, what kind of cake did Scales serve to his henchmen?  Was it Red Velvet, or Strawberry with vanilla icing? The loyal fans of The Cape demand answers! Check back with us soon for those answers in our review of the inevitable Complete Series DVD Boxed Set.