Last week I had some glimmer of hope for The Cape.  That episode was boring and predictable, but at least it was not a total train wreck.  This week the show was not only a metaphorical train wreck, but it actually had a scene where The Cape tries to avert a train from crashing.

The villain of the week this time around is Scales.  He had a short scene in the pilot episode, so he might look familiar to the show’s regular viewers (Just insert your own witticism about The Cape having regular viewers).  Scales is a disfigured circus freak who has a skin condition that makes him look like a reptile, and he runs a gang that’s in charge of all the crime in Palm City’s docks.

He’s also a shameless rip-off of Killer Croc, one of Batman’s enemies. 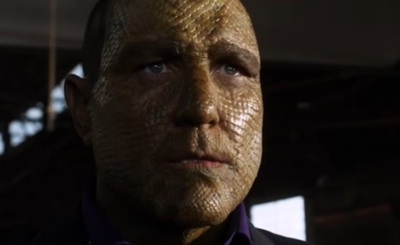 The last time we saw Scales, he was beaten senseless by a circus midget (I am not making that up).  Despite that, he is now supposed to be menacing, and this episode sets him up as a rival to the show’s main villain Chess.  There is a ridiculously complicated story behind all of this, but just know that The Cape uses Machiavellian scheming to pit the two villains against each other in this episode.  Also know that The Cape fights really dumb villains.

The Cape’s plan is to get the two villains together on a train that is holding a charity masked ball.  Chess is there in his secret identity, Peter Fleming, and The Cape manipulates Scales to publicly out Fleming as Chess.  It doesn’t matter, though, because Peter Fleming is such an upstanding citizen that no one believes he could possibly be Chess- even though they are OBVIOUSLY the same guy!  The only reason no one can figure out Chess’ secret identity is because the writers painted themselves into a corner, and the show needs for it to be this way.

Regardless, The Cape’s scheme fails, and this prompts Scales to rob everyone on the train, then sabotage the brakes.  This essentially means that things would have worked out better if The Cape had not gotten involved.  Oddly, Chess doesn’t have any sort of scheme to keep his lackeys, like Scales, in line.  He’s supposed to be a criminal mastermind, but Scales betrays him easily and predictably.  Eventually, both Scales and Chess get away scot-free, despite The Cape’s involvement.  The episode boils down to an ineffectual hero fighting an incompetent nemesis. 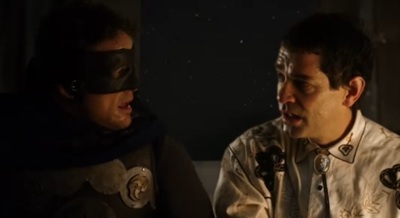 Speaking of ineffectual, there is a scene where The Cape gets in a fight with Scales on the roof of the train, and we find out that The Cape can’t use his cape when he’s in strong wind.

Those of you who HULU this show each week just to see what Summer Glau is wearing will be pleased to learn that she spends most of the episode in a sequined flapper outfit.  She has a scene with Chess where there are more hints about her being related to him.  Keep in mind that the actor who plays Chess (James Frain) is only thirteen years older than Summer Glau, yet we're still likely to have a dramatic reveal in some future episode where he turns out to be her father. 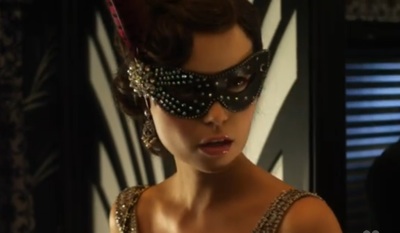 It’s not ALL bad; the highpoint of every episode so far has been the subplot involving The Cape’s family.  This week there are a couple of funny scenes where The Cape’s son refuses to let his mother’s boss into their home.  The point here is that The Cape once told his son to never let strangers into their house.  Also, this episode is less bloody, and no one gets killed onscreen.  The reduced violence, and the focus on The Cape's son makes the show more suitable for children, and The Cape will work better as a kids show than if it tries to target adults.

Of course one or two decent scenes can’t save an hour-long program.  While this episode isn’t a bad as the pilot, it’s a conspicuous step back from the improvements seen in last week’s episode.  Any hopes that the show will consistently get better over the season might be in vain.

Read our review of the next episode Dice, guest staring Meena Suvari!