Last week ended with a cliffhanger ending.  The Cape’s sidekick Orwell had fallen into the clutches of a terrifying new villain named The Lich.  The Cape had been out fighting The Lich’s army of sorta zombies in order to prevent them from poisoning the city during the big Palm City Founders' Day Parade and… you know what?  None of this actually matters, because the zombie powder poison thing pretty much went right out the window in this episode.

The second half of this two-part story line was written and directed by an entirely different group of people than the first episode.  That’s not a bad thing because, as I pointed out last week, the zombie powder, and parade poisoning plots were pretty much plagiarized.  This week, the writers decided to plagiarize something else.  The “Inject a girl with paralytic drugs, then play dress-up with her” plotline was done on an episode of Criminal Minds recently, and I think the legal department at CBS will be calling NBC pretty soon…

Anyway, this all leads to one of the oldest and lamest villain schemes in the book; the bad guy tries to force The Girl to marry him. Last week we were led to believe that The Lich had some sort of nefarious scheme in the works.  Now we learn that all he wanted was to marry Summer Glau.  Granted, I sympathize with the guy on that desire, but it seems as though The Lich wasn’t even aware of his own scheme to poison the city.  As for his plan to keep Summer drugged, gagged, and dressed like a his personal Barbie doll, this is just one more example of the disturbing sexism on the show.  Sure, the Bad Guy is doing all of this, but the entire plotline just seems like it’s deliberately targeted at guys who enjoy seeing pretty girls in this sort of compromising predicament. 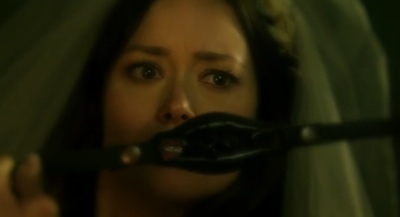 Last week, the episode ended with The Lich peeling off his rubber mask to reveal that he’s actually horribly deformed.  This week, he’s wearing a different kind of make-up which still exposes his scarred face.  Instead of being scary and deformed, it makes him look like he ate a bowl of chocolate pudding too fast, and it raises the question as to why he removed his old mask in the first place.  Apparently, The Lich just likes to peel his disguise off theatrically when he thinks it will look cool. 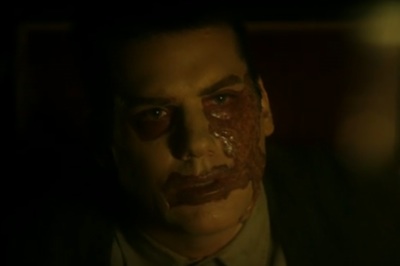 Fun nerd fact about the Director this week:  The episode was directed by Roxann Dawson who played B’Elanna Torres the half Klingon from Star Trek Voyager.  She actually does a good job with the directing, and this might be best-directed episode of The Cape so far.  It’s really the writing that ruins the episode.

Speaking of bad writing, Last week I complained that Vince’s friend Marty didn’t recognize him, and this week, Vince’s wife doesn’t recognize him either.  They’re face-tot-face in several scenes, and she doesn’t recognize the man she’s been married to for twelve years just because he’s wearing a little domino mask?  He isn’t even disguising his voice!  It just makes the whole family look incredibly stupid. Granted, the scene in the police station kinda sorta implies that Dana might have recognized Vince at that moment, but she spends several scenes in total obliviousness. It’s a plot hole that you could drive the Batmobile through. 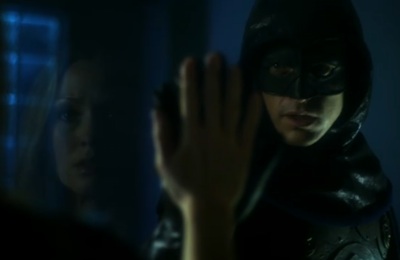 Another big issue I have with this show is the fact that Chess is Orwell’s father.  This was revealed several episodes ago through some heavy-handed foreshadowing.  The actor who plays Chess is only thirteen years older than Summer Glau, and this week featured both of them in the same shot for the first time.  It shows just how ridiculous the age difference is.

This was the episode on which I had pinned all of my hopes for the series.  They had a new villain, the opportunity for Vince to reveal himself to his wife and child, and a big two part episode to retool anything they liked, or kill off the many annoying characters.  Yet, the whole thing just fizzled, and the show is back to square one. Even though I did find the directing and editing to be good, those elements just can’t compensate for the stream of plot holes, bad writing, and the overall horrible concepts which were established in the pilot episode.

Read our review of the final televised episode Razor.