The Cape – The Lich

Remember that old Wes Craven movie, The Serpent and The Rainbow?  That was cool; I really liked that.  You know who else liked that movie?  Whoever wrote this week’s episode of The Cape.  They liked it so much that they decided to “Borrow” numerous aspects of that film to make this episode.

The zombie powder made with blowfish poison, which is blown into someone's face, in order to create an army of zombies?  That’s exactly how what went on in The Serpent and the Rainbow, except The Cape throws in some wildly inaccurate exposition abut the effects of tetrodotoxin.  While we’re discussing things that “Inspired” this episode, how about the bad guy’s plan to poison the city during a big parade; which seems suspiciously close to what The Joker was out to do in Tim Burton’s Batman.  Regardless, I’ll leave the lawsuits to Universal Pictures and Warner Brothers and get on with what else was happened this week on The Cape.

Again, we have a slow pace, flat acting, a predictable plot, and a cast of people who constantly do idiotic things just because the story demands it.  What makes it so disappointing this week is that I was so optimistic about this episode; it’s a two-part story line that introduces a new villain, and what this show really needs is a new villain.  So far every bad guy has been tied to Peter Fleming/ Chess in some way, and let’s face it, Chess is a lousy antagonist.  He hasn’t done anything menacing since the pilot episode and would have died numerous times if The Cape hadn’t been around to save him.  It’s about time that the writers just got rid of him, and allowed Vince to clear his name, which would provide the opportunity to completely retool the show.

Speaking of how Vince allows everyone to think he’s dead, this episode is full of emotional sequences where Vince laments being separated from his family, or where his wife Dana is all weepy over her dead husband. Vince could end all of this by just telling his family that he’s alive, but the show is shackled by the notion that he’s somehow protecting them by letting them think he’s dead. Any emotional weight that these scenes might have is ruined by the absurdity of the set-up. Instead of making Vince come across as noble and self-sacrificing, it makes him seem like a neglectful father, insensitive husband, and a clueless cuckold who doesn’t notice that other men are moving in on his smokin’ hot wife. 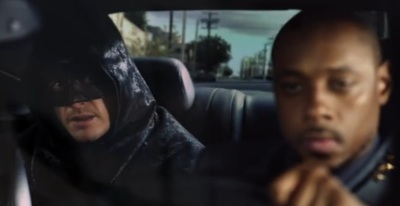 Another thing about Vince letting people believe that he’s dead; his ex-partner Marty has several scenes with The Cape this week, yet Marty can’t tell that The Cape is really Vince.  I know that super-hero stories have a genre convention which dictates that no one can see through the hero’s disguise (No matter how flimsy), but this is stretching audience disbelief.  It’s hardly the most implausible thing about the show, but one can hope that future episodes will reveal that Marty and Trip are both perfectly aware of The Cape’s identity.

While we’re talking about Marty, he lures The Cape into a trap quite easily.  This is the second week in a row where Vince has blundered blindly into an obvious set up. You’d think he’d be a little more stealthy and observant about this sort of thing.  It’s hard to imagine a competent hero like Batman failing to notice a dozen arms goons lurking within ten feet of him.

While The Cape is hunting for the elusive Lich, Orwell is following her own subplot as she tries to unravel a mystery about Palm City’s equivalent of the Lindberg baby.  Orwell meets the Secretary of Prisons wearing only a hat for a disguise in one scene, and then she meets Conrad Chandler again without any disguise at all, or a weapon.  This is out of character for her; in previous episodes, she’s been rather paranoid about having her identity exposed.  The reason that she sticks her neck out in this episode is that the writers need for her to get captured by the villain.  Which is what happens. 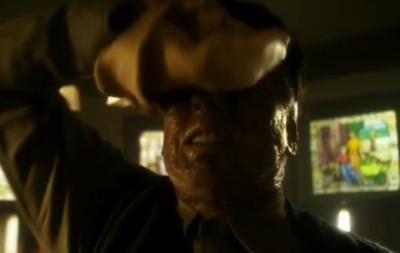 Now that we’re on the new villain, it was obvious that Conrad Chandler is The Lich, looong before the big reveal came (And I can’t believe that directors are still using the “Peel off my rubber face” shot for this sort of thing).  The Lich does have some promise, though: He’s scary, has an army of fanatical followers, he even kinda has super-powers with his zombie powder thing, so perhaps next week the series will take advantage of this opportunity and overhaul itself.  Find out in our review of The Lich: Part 2!