The Cave (PC) Review: Venture Into the Unknown!

Ron Gilbert is best known for his series of brilliant point-and-click adventures for LucasArts that he developed through the late 80‘s to mid-90‘s. Now he’s currently working at Double Fine Productions, with former LucasArts writer/programmer/designer Tim Schafer and together they have brought us a whole new game known as “The Cave”

It’s a lazy Thursday afternoon and after a brief download through the “Steam” system I’ve had time to really delve into the heart of The Cave and, surprisingly, have noticed there is no pointing or clicking as expected from Ron Gilbert! This is as much a co-operative game as it is a single-player adventure. There are three playable characters that are selected from a choice of seven: The monk, hillbilly, adventurer, scientist, twins, knight, and the time traveler. You are thrown into the depths of sharply detailed and interesting cave system where you will need to make the most of your characters unique skill-sets as well as some common sense and logical thinking to work your way through this interesting puzzler. Each character gets their own on screen icon which fills the player in some of their individual back story and journey.

Your character’s abilities come in forms of small digressions to find solutions to the caves puzzles. For example, to pass through the cave's first locked gate you have to pull and hold two levers at once, leaving the third character free to pass beneath the gate who can then activate the gates lock mechanism, allowing the other two characters to pass through successfully. Though, if you choose the twins, you can use them to create a body double so one can hold the lever while the other one can pass through the gate unhindered. These types of variations, however, are relatively minor and you will find yourself doing the same skill to complete every puzzle in the cave just in a different order or path. To jump down a huge pit, for example, one character creep around the circumference while the Knight can just jump off the ledge and activate his invincibility skill to float downwards into the abyss. They're 2 different paths, but as the difference is so small in the amount of time taken to perform the actions there isn’t really much excitement performing the same actions again and again to follow through a different set of puzzles.

I preferred to play the game using my Xbox 360 controller as I did with similar titles, Bunch of Heroes and Trine, on the PC and found the whole experience very fluid for the most part. The d-pad allows you to switch quickly between your characters and a good thing is they'll automatically regroup as you leave each area though it's up to you to guide them to where they need to be whilst venturing through the cave. One thing where The Cave meets a downfall is that there’s also no way to die in and your player characters respawn nearby whenever they perish. This is something that I felt was a little odd. If there was the added effect of perma-death or even an extra life system then this would make the game far more challenging and make you feel like you accomplished the cave rather than just journeyed though it. There’s no element of fear when you know you can just die at any instant and come back.

The puzzles aren’t enough to keep you entertained and the lack of variation makes this a little sombre. The truncated nature of the cave's sections means that your options are always limited and anyone who plays the niche adventure games a lot will sail through The Cave without a second thought. When you have 3 items such as a battery-less tape recorder, some electric eels, and a dead battery you don’t need a scientist to work out what you need to do to progress. There are a few occasions when you may feel trumped, but these are so few and far between that you don’t reap the rewards mentally for a cunning piece of thinking or a diverse piece of gameplay. 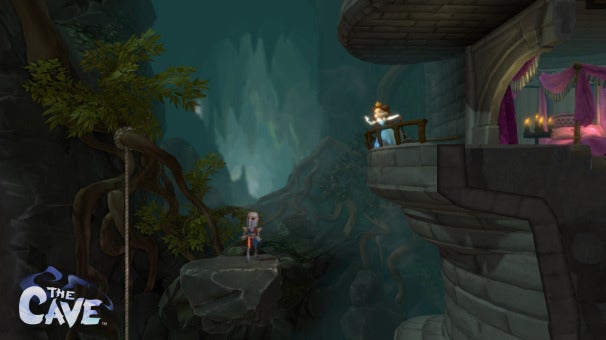 One thing that is awesome about The Cave though is just how funny it is any this is a very funny game with the cave itself narrating your actions with a very dark commentary which often had me smiling. The art style is also very glamorous and had that artsy, hand-painted style that I think works really well in games of this genre. The characters themselves look crisp and sharp and even though the 7 player characters have no voices the characters you meet along the way are brilliantly voiced and you often feel excited to hear what they have to say as it’s often funny and memorable.

Once you have finished the game you unlock four more characters and four more areas to explore and, even though the games feels somewhat repetitive, the game is amusing enough that you will want to try out the new guys and continue your journey through The Cave. Another thing which can get you a little competitive with friends is the achievements system which often rewards you for messing around and trying silly things rather than just “10 points for completing” etc

In conclusion, I found that each character has some dark secret to uncover and with mute characters the storyline sometimes feels a little weak and you don’t feel fully immersed in your character due to the fact they have no interaction. The Cave looks and plays great though if it was as intelligent and witty with the puzzles as it was with the script I feel that I would have spent even longer venturing through The Cave but it never quite fully satisfied my gaming needs in a truly satisfying way. Thing is though you will definitely have fun finding your way out of the cave but it’s just a shame the gameplay didn’t pull me even deeper.