While The Darkness 2 is a direct sequel to the original from 2007, it’s important you know that it’s a very different type of game. The original had an almost adventure game type structure and simply labelling it a first person shooter was quite misleading, while you do indeed shoot guns from the first person perspective, The Darkness was obviously more concerned with its story and characters. However, while The Darkness 2 offers quite a different experience than that of its predecessor, everything that made the first game great has been preserved for the sequel and The Darkness 2 manages to deliver on all fronts for returning fans and change enough to (hopefully) draw in anyone who didn’t warm to the original.

Prior knowledge of The Darkness is not necessary to enjoy the sequel, there is a pretty decent catch up for new players (which can be skipped) that will bring you up to speed, but players that have finished the first game will certainly get more out of the returning characters and the dialogue between them and Jackie. The story in The Darkness 2 is set two years after the events of the first game, Jackie, now the head of the crime family, is still grief stricken over the loss of Jenny from the first game and is struggling to maintain his sanity. The plot was one of the best aspects of the original game, and I dare say it is even better here, the game does a great job of making you care about the characters that are a part of Jackie’s everyday life and there is a ton of (optional) dialogue that, just like in the first game, enriches the experience along the way and the voice acting that accompanies it is just as good as before. The story is brilliantly told throughout the campaign and there are a couple of instances where the game forces very difficult decisions on you, to the point where I had to pause the game and really contemplate what I would do in that same situation. The structure of the game is very different than the original, which had a sort of free roaming aspect to it, The Darkness 2 is very linear and scripted in the same ways that, well, most other games are these days.

The story really plays on the mental state of Jackie, the loss of Jenny is obviously eating away at him and with the added stress of restraining The Darkness he is clearly slipping further and further into insanity. The humanity of the story is perhaps one of the most impressive things about it, you really feel for Jackie and the game does an incredible job of making you question what is real and what is not throughout the story. I would love to say more, but spoiling the story of The Darkness 2 would be nothing short of a crime. Obviously there is no accounting for taste when it comes to story, but if the first game hooked you and made you care about those characters, then you should feel very satisfied once all is said and done here. 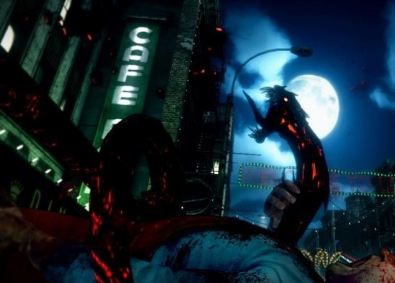 Bark at the moon!

The Darkness 2 plays very differently from the original, the gunplay has been modernised and feels far more responsive, the biggest change is in how The Darkness can be used and upgraded. In the first game, you simply had four separate abilities courtesy of The Darkness, you have all those (albeit tweaked) and much, much more this time around. Jackie can use The Darkness can tear down doors, rip off car doors for shields, tear enemies in half, rip out entire spinal cords, obtain ammunition and health from executing enemies, throw objects at enemies and of course, eat human hearts. The primary attack with The Darkness functions in the same way as a melee attack and the secondary attacks are the executions. There are four separate types, each with their own unique function that really add variety to the combat, it would have been nice if they were more executions, but all of them are gloriously violent and satisfying to do. The upgrade system is introduced to you very early on, as you kill enemies you will earn essence, which can be used to upgrade your various abilities. They start out pretty simple, like increasing the amount of health or ammo you get from executions, and when you max out a particular set, you’ll be unlocking far more destructive and powerful attacks. You can no longer control whether The Darkness is out like you could before and there is no longer a metre which shows you how much Darkness power you have left.

If you’re not stood in direct light, you can use The Darkness as much as you please, only in direct light will you lose it. This brings me to the only real complaint I have with the gameplay, Jackie seems to have Riddick syndrome in that even normal lights almost blind him, enemies will constantly use lights against you, so just like in the first game, you will be spending quite a bit of time shooting out lights. The light wielding enemies are about as smart as they come, which isn’t saying much, the A.I. is pretty terrible for the most part. Enemies will just rush at you if they don’t have a gun and even if they do, they usually stand in the same spot, seemingly waiting to be killed off, or they might mix it up a bit by randomly going prone right in front of you. Better A.I. would have been nice, but the enjoyment of ripping through hordes of enemies would have been dampened a little. 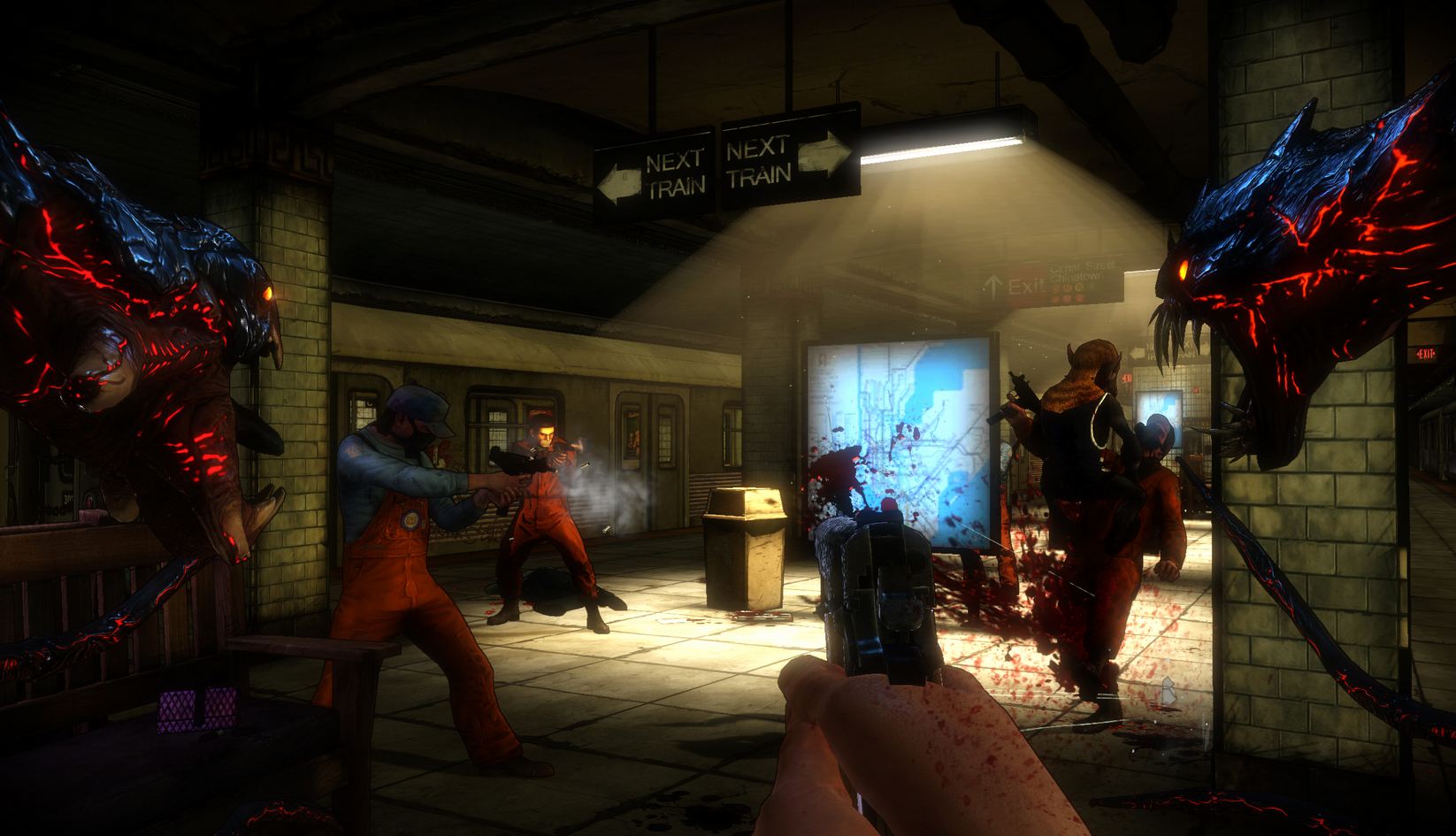 Outnumbered, but never out... crazy-demon-snake-armed... ah you get the idea.

The single player campaign in The Darkness 2 is of a high enough quality that it alone makes it worth playing, it is fairly short, expect to see the credits roll in roughly 6 hours for the average player. My play through clocked in a bit longer as I obsessively talked to everyone and hunted for as many collectibles as possible, which are definitely worth seeking out as they add quite bit of depth to the history of The Darkness. There is a new game plus mode, which is a must if you want to see every power fully upgraded, which is definitely worth doing. In addition to the campaign there is the cooperative Vendetta campaign (you can play solo if you wish), this lets you pick one of four characters, each with their own unique power and play with up to four people at once. This mode is well made and fun for the same reasons that the main game is, but it tries to position itself alongside the single player story in a sort of “meanwhile this is also happening” kind of way and you can’t help but compare the two because of this and the single player campaign is just so much better. I mean that as by no means a knock against the coop mode, the campaign is really just that good and playing the coop mode just made me want to go back to it.

I came into The Darkness 2 not knowing what kind of game to expect, the original game is one of my favourites from this generation and I was really hoping the sequel would deliver in the same ways. The Darkness 2 manages to be more than just a great sequel however, shooters, and more importantly, games have changed dramatically in the last five years. The Darkness 2 doesn’t feel like a game that merely pays lip service to the original for the sake of making a sequel, there are certainly aspects that its predecessor did better, but The Darkness 2 improves on so much that whether or not you enjoyed the first game, you should not hold off playing this one at all.