Often times a change of scenery can make a big difference. Independent filmmaking has become as inextricably tied to relationship and family drama over the years as it has to New York City, Los Angeles and generic Suburbia. So taking place in Hawaii gives The Descendants a unique presence, not that Alexander Payne’s outstanding film requires a tactical advantage. The venerated filmmaker simply understands how this setting, in all its tropical beauty and paradisiacal allure, has something important to say about this story of life’s many blemishes.

Matt King (George Clooney) is a lawyer and a descendant of Hawaiian royalty, as are his many cousins. A huge portion of land in Kauai has been passed down to all of them, land they ultimately must sell or give back to the state. They plan to take full advantage of their birthright and Matt is the trustee who must ultimately sign off on the sale. But Matt has been having a rough go of it lately: his wife, Elizabeth, has been in a coma for several weeks as a result of a boating accident and her prognosis grows grim. As such, he has become the primary caretaker of his 10-year-old daughter Scottie (Amara Miller). He also has a 17-year-old daughter named Alexandra (Shailene Woodley) at a rehabilitative boarding school on "the Big Island."

Matt hopes he can weather the storm. He harbors some resentment with regards to being a “back-up parent” thrust into the starting lineup, but realizes his marriage had been growing cold and distant; he’s gotten his wake-up call and he’s ready to make things right. But when bad news from the doctor forces him to fetch Alexandra home from school, she reveals that the big fight she had with her mother before the accident was because she’d caught her having an affair. 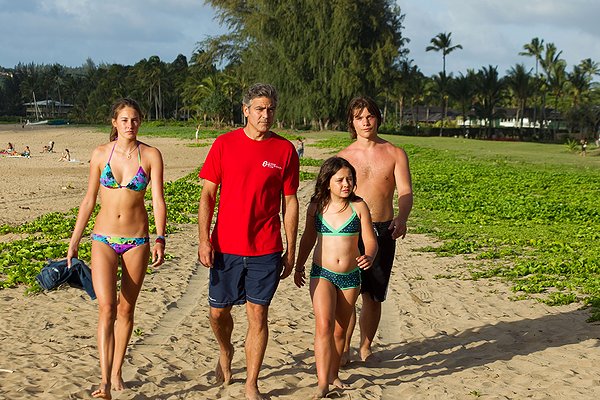 At first, Payne and Clooney paint Matt as a father with good intentions but piss-poor tact, but this news transforms him from a bit of a scrooge to a more pathetic individual, albeit one you have to feel a bit sorry for, especially given how his daughters, other relatives, and Alexandra’s beach bum pal Sid (Nick Krause) behave around him. Although its not clear for a while whether Matt simply wants to stalk his wife’s lover, confront him, get revenge or just find peace of mind, it’s an undertaking you sympathize with given the waves of emotion experienced by the character.

Clooney, in by far one of his very best performances if for nothing but the fact that he cannot lean on his charms, expertly embodies Matt’s whirlwind. His portrayal fully demonstrates Matt as smart and rational yet emotionally feeble and sometimes volatile. As he throws on his boat shoes to run down the street and get answers from his wife’s best friend and closest confidant, the awkwardness of it all comes out (most obviously in his bizarre gait). Even in life’s toughest and craziest moments there’s a darkly comic edge, and The Descendants hits on that in addition to the full range of other emotions. No doubt Payne's co-adaptors of Kaui Hart Hemmings’ novel, little-known but highly recognizable character actors Nat Paxon (Beerfest) and Jim Rash (Community), had a hand in the sharp wit.

But the real brilliance of the writing shows in the characters. Almost every one gives us cause for dislike or even hatred at some point, but each of those characters goes through a redemptive process and surprises us. Whether it’s the daughters being obnoxious, Sid not knowing his place or even Matt’s father-in-law laying thick blame on Matt, somehow they all find their way into our good graces by the end, which isn’t an easy feat to pull off. That’s testament to how much sincerity and humanity Payne brings to the film. 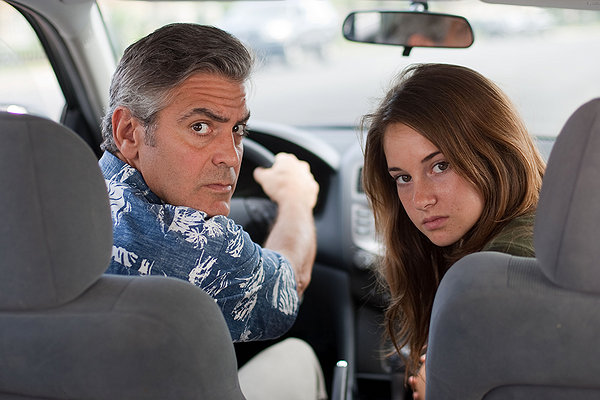 The Descendants will hit close to home for many and everyone will connect somehow whether with a character or empathy for the conflict. The very nature of Elizabeth, a woman unfaithful to her husband yet in a coma and on the verge of death, challenges everything we know about right and wrong, good parenting and bad parenting — it will awaken a change in perspective and what matters most in every person who sees it. The rest of the film and its many subplots just magnifies this, to the point that when Matt finally comes face to face with his wife’s inamorato, you might be surprised at how you want it all to go down.

Seeping in the cracks throughout is the Hawaiian setting. There’s something about the tropical backdrop that elicits different emotions, that helps keep things in perspective when the drama ratchets up several more notches. Even something as simple as every male in the film over 20 wearing Tommy Bahama and khaki shorts enhances the story and the film’s message. The beautiful Polynesian acoustic soundtrack can also not be understated in bolstering this effect.

Great films reveal to us truths we’ve always known — whether in our minds or deep in our hearts — in a way that makes us feel as if we’re realizing them again for the first time. The Descendants provides that unique light, in this case with some beaches and a few leis. Payne might have taken a long time off after Sideways, but he came back with something more palpable, universal and undeniably great.

Rating: 9.5/10 The Descendants Directed by Alexander Payne Written by Alexander Payne, Nat Faxon and Jim Rash, Kaui Hart Hemmings (novel) Starring: George Clooney, Shailene Woodley, Amara Miller Other Player Affinity Staff Reviews John thought: "Call Alexander Payne's films slight if you must, but the man has an uncanny knack for tackling the human condition with complexity and honesty, levity and sadness. With The Descendants he reaches a new level: All the elements I and many others loved about Sideways and About Schmidt are executed here to near perfection. Of Payne's "humanist trilogy," this film is the funniest, deepest, and most satisfying. George Clooney has never been better, and he's match with outstanding supporting performances by Shailene Woodley, Amara Miller and Robert Forster." Rating: 8.5/10