The Devastator is a quarterly comedy magazine that is loosely inspired by other comedy zines such as: National Lampoon, Mad and Cracked magazine. Where the Devastator succeeds is where the, afore mentioned magazines all fail. It has the sophistication of the Onion, but with the geek culture references from ones youth that can be found on any vintage T-Shirt website. What it also does different is that each issue has a theme selected by the editorial team. The first issue was cartoons; the second issue had an all Sci-Fi theme to it and the third issue… Cats. That’s right natures “laid off boyfriend” gets its time to shine as the Devastator proves once and for all that there is more than one way to skin a cat.

You can’t really review an issue of the Devastator per say, you can talk about what “articles” were successful and which ones fell a little flat; but in terms of reviewing it like a book it would be impossible. That being said let’s touch on the articles that were funny. 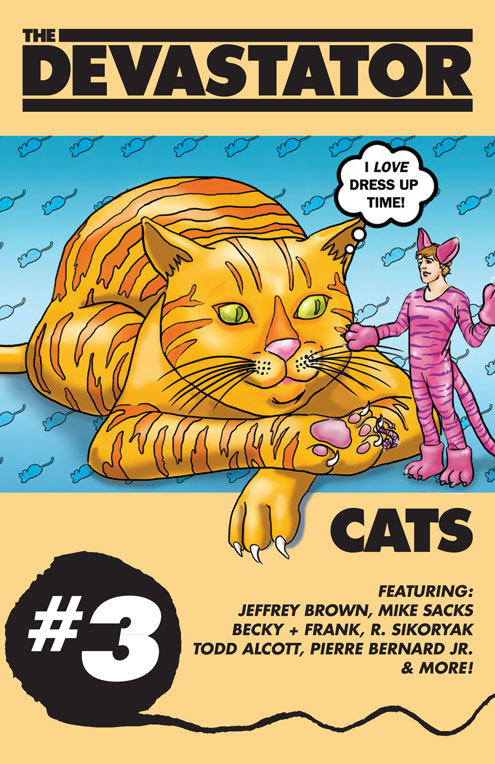 The book opens up with a comic drawn by Jeffery Brown (AEIOU) and isn’t hysterical, but satisfyingly demented as a cat savagely rips a squirrel from a tree and murders it as two innocent onlookers are forced to watch. This is followed up by a hilarious story entitled “Meme Dreams: The Win and Fail of Keyboard Cat.” If you’re unfamiliar with the Keyboard Cat, then please stop reading this article and post a comment on how you’ve just discovered the internet. Enlighten us with your journey from an Anglefire site to this very review. At any rate, Meme Dreams is a look at the life and death of one of the most talented musician cats of all time. From his early days in local talent contests to finally being accepted into Juilliard, you will laugh, you will cry from laughing at Keyboard Cat’s journey.

There are other funny articles like Danger Cats Kickstarter page to capture the Rescue Rangers and a perverts meeting with an automated Hello Kitty chat program. Really one of the best (aside from the Chester Cheeto Wiki page) was the Julie & Julia inspired blog from TV’s own ALF. Alf walks you through his recipe for American Short Hair Burgers. If the blog post doesn’t amuse you the comments on the blog post will, or at the very least you'll learn a new recipe to try out.

There’s really only a few misses in the issues. I wasn’t particularly fond of “Cat Got Your Tech” or “Adventures in Kitty Sitting.” Mostly the animated articles seemed to be the weakest part of the issue, but not terrible by any means. In general it was very funny and I can see cat lovers and haters, both finding amusement while reading it. The Devastator mostly functions off of subscriptions and frankly I was sold after reading the first issue. There’s a teaser for the next volume, Arcade, and I can’t wait to read what’s in store.

If you live in the L.A. area you should check out the release party at Meltdown comics on the 25th of June.