It’s been about four years since Microsoft announced the winners of its first “Dream-Build-Play” competition, with the intention of promoting the XNA developer tools that have been the backbone of the Indie Games area of Xbox Live. If you take a look at the Xbox Live Arcade releases in mid-2007, it’s easy to see why the prospect of indie games, let alone any original game, was extremely exciting.

The basic gameplay is mostly linear side scrolling hack-and-slash action. One aspect that grabbed people’s attention during the original’s release was the art style. While good for an indie game, I expected to see some kind of an update to the graphics, especially since it’s been so long since the predecessor, however it still looks the same. I wasn’t looking for an Unreal Engine version of The Dishwasher, but just a little more polish and variety. Also in regards to presentation, the music is pretty decent. It’s kind of what you expect, mostly metal-esque, but thankfully it doesn’t match the angsty 90’s teenager doodle artwork that goes along with it. 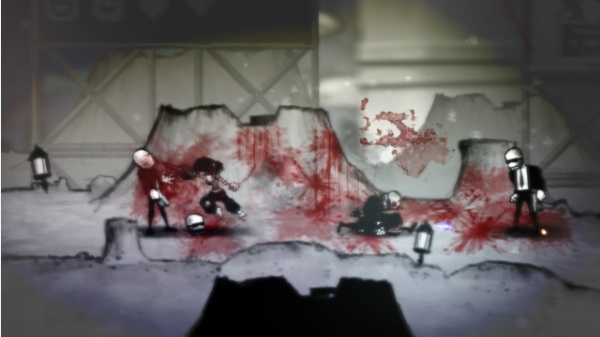 There is a bit of a story, presented in the same manner of comic book panels that the original had. Of course that style has become more commonplace in the years since the first Dishwasher, so it doesn’t seem as unique as it did the initial go around. The basic premise is that The Dishwasher is rebelling against evil cyborgs. Yuki, who makes an appearance in the original, is back, and this time you can play the campaign with her. I really enjoyed playing as Yuki more, although they are essentially the same character. Her story is way more interesting, which isn’t saying much considering both stories are fairly bland. What I appreciate about her journey is that out of nowhere she’ll slip into what seems like a flashback, most of which are interactive, and some of which are very creepy. The fact that she has a chainsaw attached to one of her arms may help with my preference for selecting her.

Although I preferred Yuki, both characters play the same, unleashing fury against the onslaught of enemies with various weapons, most of which are blades that you acquire throughout play. Similar to games like Ninja Gaiden where you can get by with just hitting X repeatedly, it is possible to become way more skilled by mastering combos and utilizing all your resources, such as grabbing, shooting, and my personal favorite, the warp.

The warp mechanic is what sets this game apart from other beat-em-up or hack-and-slash titles. Just press the right stick either left or right and your character will fly over in that direction, useful for getting far away from enemies or getting up in their faces quickly. However you can also press up and you’ll fly upwards, and in fact you can keep doing it until you hit the ceiling. Of course you can then pounce on enemies from there. Executing moves like warping up, warping over to get above an enemy and then striking downwards are the kind of skills that can really help you in later stages, and make you feel like you’re mastering the game, rather than just hitting X a lot.

The only unfortunate part is that there are no air combos, which is a real missed opportunity. I found myself gliding around defeating enemies all over the screen without touching the ground for lengthy periods of time. That seems like a gameplay aspect that should have been taken advantage of, by awarding you a higher score aside from the regular combo scoring, or giving you an achievement, or any type of recognition.

Occasionally you’ll pick up projectile weapons. Shooting is executed by holding the right trigger and pointing in the direction you want to shoot. Guns don’t seem to do much damage, and honestly I’d rather use the warp mechanic to get close to an enemy quickly rather than stand far away and hold a button down for way longer than I should have to. Also there’s magic that is executed with the left trigger and unleashes attacks on all the enemies in the room. Your magic is refilled the same way you regain health, by defeating foes.

Along with getting new blades and other types of weapons to equip, you can also find items; some that boost your stats, and some that replenish health and magic. Throughout the game you’ll run into “Halper Bots” which are essentially traveling merchants. Currency is, of course, picked up after defeating baddies.

While the majority of your play sessions will consist of this, there are a few surprises. My favorite was the rhythm game section. If you go slightly off the beaten path you’ll run into these rhythm mini games where you tap the four face buttons as they scroll across the screen and your character jams out. Score high and get a reward. As another example, sometimes when you enter a room, a clock may start to tick down. Defeat all the enemies before it hits zero and score some loot.

If you die too many times you’ll unlock a new difficulty level called Pretty Princess. Not only is the game significantly easier, the world is now tinted pink, hearts are everywhere, and rainbows appear instead of blood. Since this also unlocks an achievement, it’s worth dying off a few times just to see it. 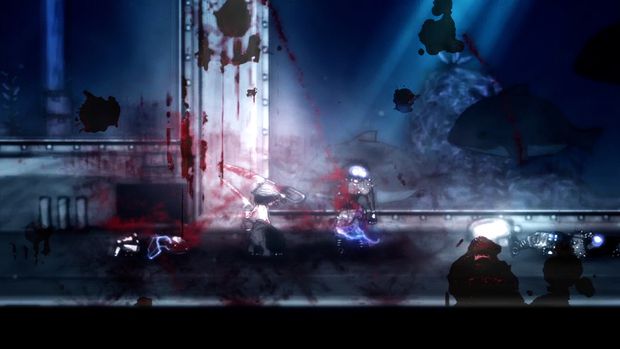 There are other modes that embrace the craziness of the combat, both of which involve hoards of enemies coming after you. First is Arcade Mode, which is a series of unlockable levels filled with baddies, and second is the Dish Challenge, where the enemies never stop until you do.

If you just want to wail on a dummy, you can select the Practice Room. Also available is an online mode where you can play co-op missions over Xbox Live.

The one word that describes where the game fails is repetition. While you can get clever with your combos, there is only so much slashing you can do before you start to get bored. It holds its value much longer if you play it for short bursts, rather than burn yourself out on it quickly. Also the backgrounds are all extremely similar, to the point where it’s easy to get lost, even in small levels.

At one time The Dishwasher was the indie darling for the console crowd, and while the sequel delivers the same stylized, fast-paced gameplay from the original; the initial joy of experiencing that world has faded a bit. While I appreciate the warp mechanic a lot, it’s not enough to push Vampire Smile into anything beyond an average hack-and-slash. That being said it’s still a solid, fun game with plenty of replay value.