The End of an Era: Goodbye MMOs?

By: Christopher Puenner | PC Features | August 20, 2012
The flame has been burning for quite a while now and many have been waiting and watching with a worried state of mind that it might go out at a moment’s notice. To those basking in its heat you may be too content to realize that the light is slowly fading and, as many new sparks try to restart what was once a mighty blaze, every single sparking attempt falls on cold ground only to sputter along for a few short moments before extinguishing beneath the dust of time. The fire I’m talking about is the current generation of Massive Multiplayer Online Role Playing Games. We’re talking serious MMORPG kingdom stuff here, the rulers of the last 8 years of RPG gaming. Not just any MMORPG’s however, the ones made with passion, the ones that made a mark, and of course the one that sets the current standard.

Since Star Wars: The Old Republic has gone free to play it has been said and noted by many people, journalists, and specialists, that it’s clear this cycle of MMO’s is ending soon with Mists of Pandaria (World of Warcraft’s newest expansion) and Guild Wars 2 to be two of the last gasps of breath we can hope to see before a new generation of MMO’s find their way up and out of the ashes. It’s important to note that while some of these games still boast extreme populations of paying customers they are all declining with no exception. Let’s take a look at a snapshot of what the current standing is in terms of subscribers and active accounts for five of the most notable and recognizable titles: 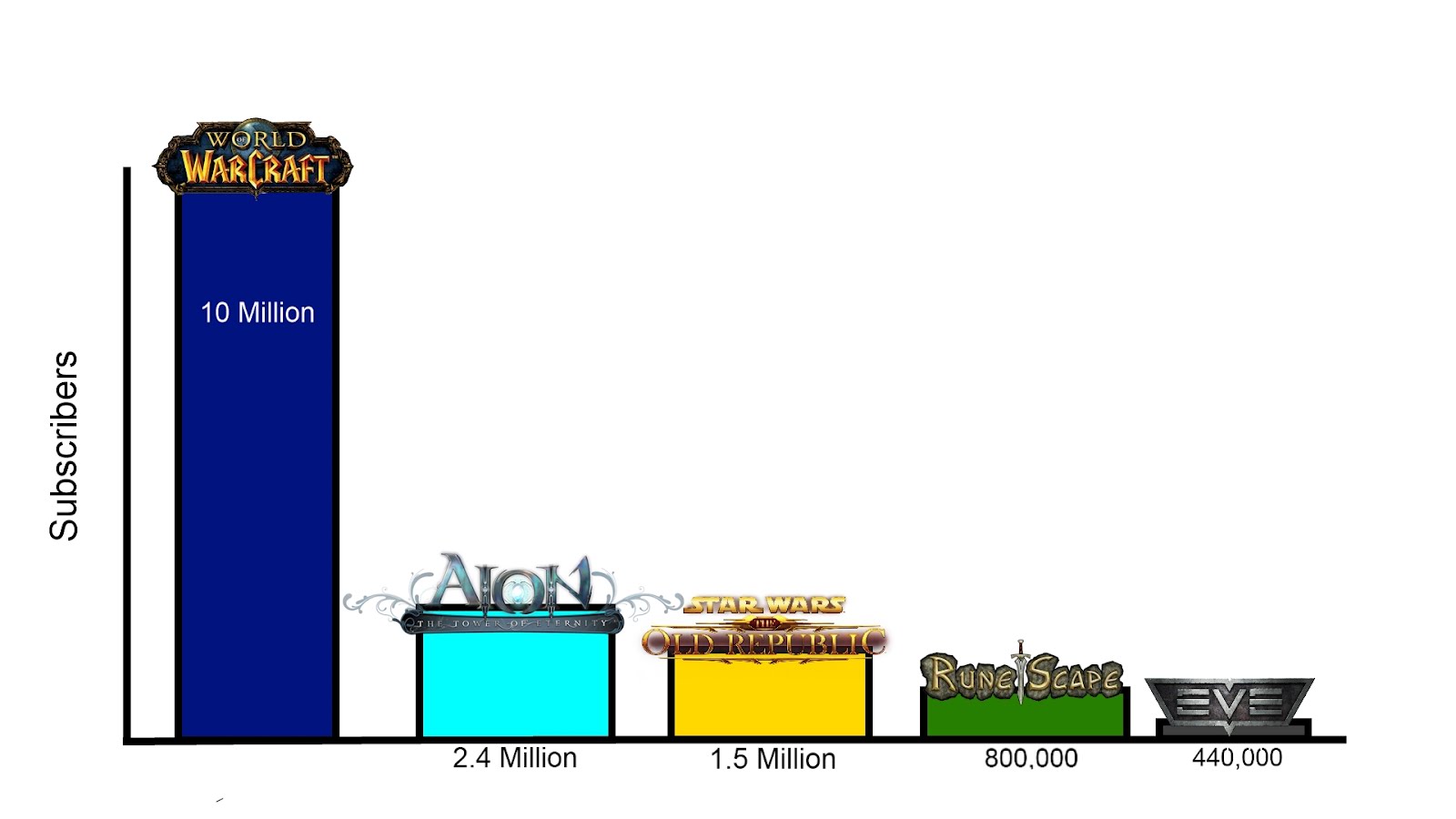 There you have it, as of the latest stats of 2012 this is how the top five mainstream MMO’s are faring in terms of subscribers and active accounts currently. At a quick glance there are multiple assumptions that can be made. One might say that World of Warcraft (WOW), while not the first MMO ever, is doing something right and that any other MMO is doomed to failure or will never achieve as much renown and power as WoW has. There is partial truth in that statement, no other game of its kind really compares with the scope or size of population that inhabits Azeroth (World of Warcraft's world). Does that necessarily mean that World of Warcraft is infallible or safe from all potential threats? No it most certainly does not. If we look back to 2006 and track the subscribers in these five games to 2012 we can see something different and rather disheartening for this genre of games: 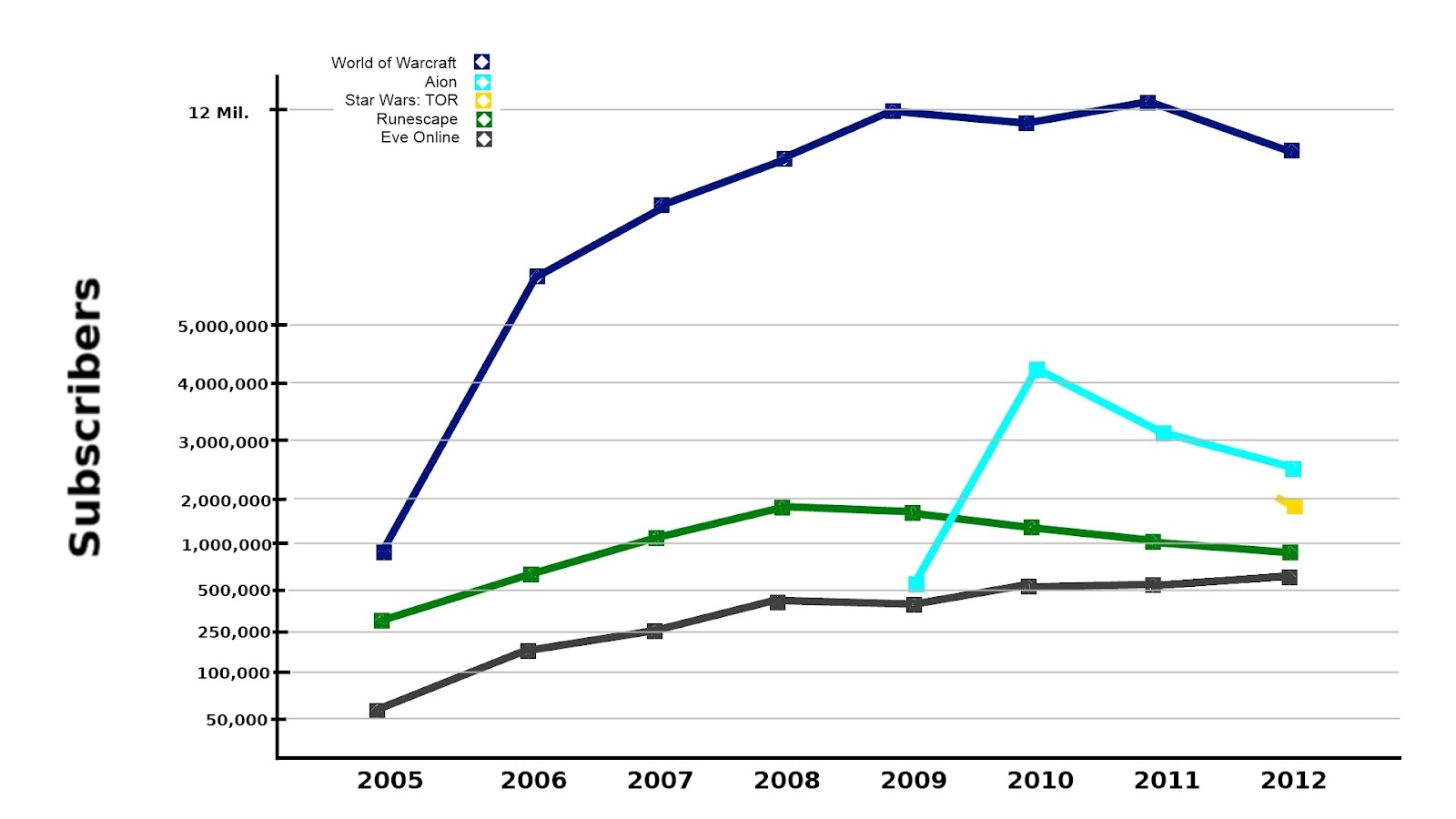 There is a theory and a sizable argument surrounding loss of subscribers which basically states that the free-to-play (or F2P) model is replacing the monthly fee subscription-based MMOs out there. Of the five games listed only World of Warcraft and Eve Online require a monthly fee to play, the other three (Runescape, Aion, and Star Wars: The Old Republic) offer paid components in the form of extra content, items, character boosts, and better graphics but mainly market themselves as free-to-play. While these free-to-play games are doing well in terms of player retention, they are also not safe from the downturn of overall MMO players. No matter the size of subscribers or active players all MMO games have seen a hit in the past few years. There is an identical trend with all of these games just in different scales.


A good example of an entire MMO's life cycle is Warhammer Online: Age of Recoking or WAR for short. Upon its release back in 2008 WAR was met with high acclaim, it received high scores from very esteemed locations such as a score of 8/10 from Eurogamer, an A- from 1UP.com, and a perfect 5/5 from Gamespy. It was an exciting time for massively multiplayer gamers everywhere, the first large chunk of people getting tired of World of Warcraft were looking for something fresh, something new -- a 'WoW-killer'. There was so much promise in WAR, the style was consistent, the PvP was fun, the lore was rich and full, and the universe had room to spread out and grow for years to come. Everything was going fine and as of September 30th 2008 there were around 1.2 million sold copies of WAR with 800,000 registered users, but then October 10th rolled around and the users sank to 750,000. By the end of the year, December 31st, there were only 300,000 users active in the North American and European servers combined. On May 5th of 2009, sitting at 300,000 users with a reported loss of $1.08 billion in the financial year of 2009, WAR server reductions followed to a total of 13 active servers. Recent numbers are not accurate but as of December 14th, 2011 there are only three active servers worldwide supporting the game. We saw the rise and fall of a potential gaming juggernaut in three short years time.

The elephant in the room is unavoidable. There is no secret on how to market your MMO to make it successful with a long life. Free-to-play isn't a magic cure-all for these games. All MMOs with free-to-play are still slowly falling down and other free-to-play games such as League of Legends are thriving. Gamers aren't leaving the market, they are simply going somewhere else. There is no universe that will revitalize this genre in it's current state. All current generation MMOs are sinking regardless of how big they have become and all attempts at jumping in result in a shared fate. We're nearing the end of an era. Its a sad concept for gamers everywhere that these titans of imagination, immersion, and community cannot survive for much longer but there is still a good couple of years left to go! Guild Wars 2 and Mists of Pandaria look to be more than promising and will undoubtedly ensure an explosive ending to this chapter of gaming history.