After the exciting events of The Flash Annual #1, The Flash races head first into Zero Month!

This run on The Flash, written by Francis Manapul and Brian Buccellato, has been excellent so far with entertaining new villains balanced out with great revisions on the old standards.  Much of the same can be said about their take on our hero’s origin, one that is as well known to fans as Superman and Batman’s have become universally - Chemicals, lightning, and one hardworking forensic scientist who would become one of the world’s greatest superheroes.

When approaching the origin of the Scarlet Speedster Manapul and Bucellato seem to have taken a page out of Geoff Johns’ book - The Flash: Rebirth to be exact - and the focus on the relationship between Barry Allen and his parents.  As established in earlier issues his mother had a large role in his childhood and influenced his later life a great deal, so this issue is definitely an expansion on those threads. What is introduced is the element of his father and their own unique bond, both of which play off very well in how they shape the young Barry both in youth and as an adult.

This is a probe into the mind of Barry Allen and not necessarily about what made him a hero, but about the things behind them that gave him the goal in the first place. It’s engagingly written, with equal parts tender and reflective scenes scattered throughout, and features great character development for Barry. One can understand and truly sympathize with his backstory and drive as they read along.

After the writing the art is simply a bonus. After months of perfectly competent work by Marcus To, and then the Annual - which included pencils by Scott Kolins - Manapul has finally returned to take the reins. Manapul has consistently done a fantastic job at capturing the fluidity and overall style that a Flash comic should have. 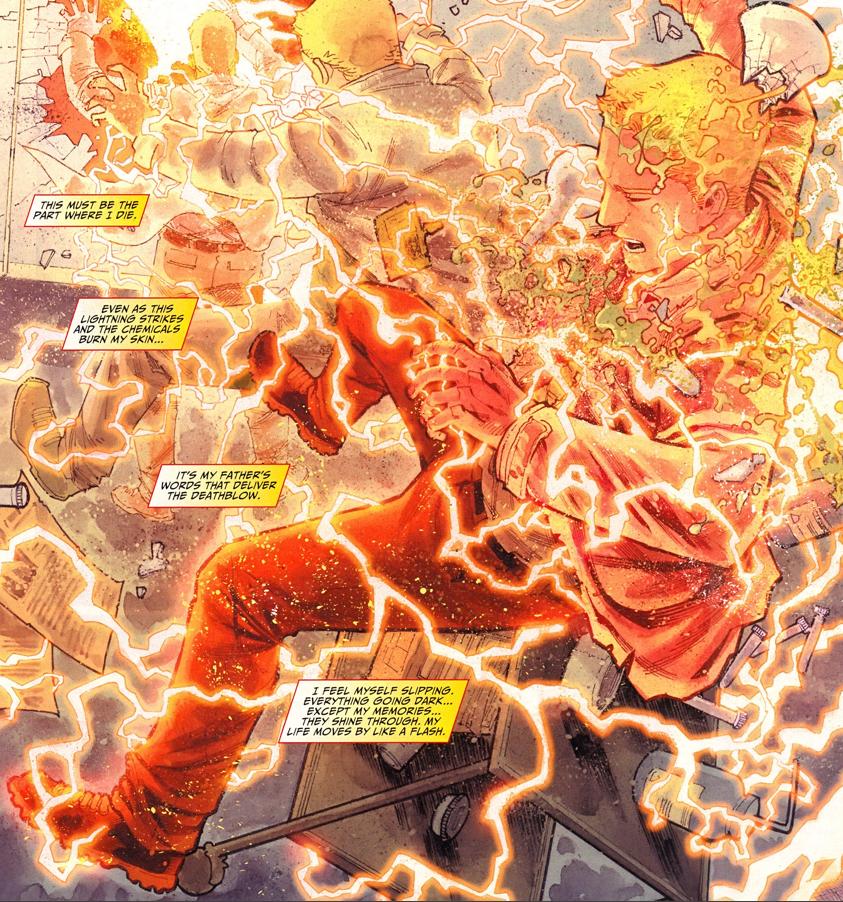 His composition is completely on target as is the coloring by Brian Buccellato that has served to underscore it. It’s a great combo and what some might say is actually the highlight of The Flash.  While there might not be as many opportunities to showcase that here it still works hand in hand to create emotive and emotionally charged set-pieces through the flashbacks to Barry’s childhood and the “present” as Barry comes to terms with both his new abilities and some shocking revelations.

Also included is the now customary Logo Gag, which once again is just a cherry on the top of the art. Overall a solid and enjoyable read that brings new light to the origin of the Flash and what exactly makes Barry who he is. Though it does, like many other Zero Month issues, read too easily. While it's content may be otherwise, it goes by too fast. However, some might find this less of an annoyance and more a thankful reprieve from The Flash's regular high-speed advenetures - which continue next month as "Gorilla Warfare" begins!