Dear fans of Wally West… I’m sorry. I’m sorry that Wally has a wife and two kids and was never as interesting as Barry Allen. I’m sorry that with one issue, Geoff Johns (Blackest Night and anything else good at DC) has made Flash a better character than the “Big Three” or that Wally could ever be. And for that,… well, I shouldn’t say I’m sorry if I don’t mean, should I?

The first page of this book sets the tone for the entire issue, “New York may be the city that never sleeps, but Central City is the city always on the run.” It’s almost silly to say that this book reads fast, but it does.  Once the story starts, it never stops. It pushes the reader forward all the way to the last page. Barry Allen is returning to his job as a forensic scientist for the Central City Police Department, and his life as the Flash. He begins his day by taking out the new Trickster, who has decided to make traffic in the city
worse than it usually is. He shows up late to work and is introduced to rest of the “Lab Rats”, and is sent to his first homicide case: Mirror Master. 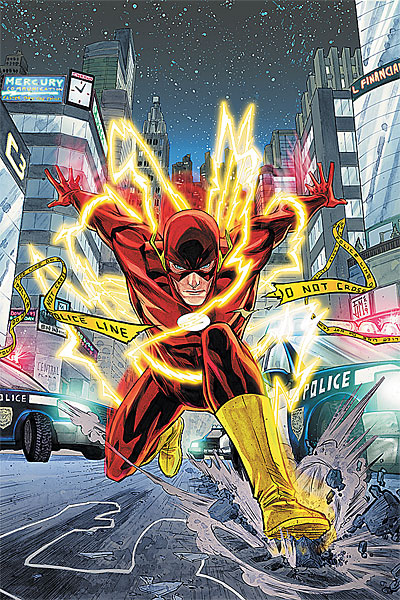 Johns not only creates a story that new readers can latch onto, but also pays homage’s to everything that made Barry Allen as Flash great. If you read Flash: Rebirth, then you will see familiar characters and classic personality traits continued over from that series. Barry and Iris’ banter is not just classic, not just great, but will put a smile on your face. Johns updates the Flash and the world of the DC Universe by giving Barry and Iris cell phones. They text back and forth like a real couple throughout the book and it’s funny to have the Flash texting as he’s running.

If DC is smart, they will lock Francis Manapul (Adventure Comics) to a life contract of drawing Flash. His art is beautiful and stunning. Whoever found Manapul truly has an eye for talent and should be given a raise or at least a hug for bringing him to DC. Brain Bucceelato (Adventure Comics) coloring is bright, bold and frankly, a ray of light in comics today. Francis and Brian show that not all comics must be dark and full of shadows to be great. Barry is drawn perfectly as the Flash but also as the nerdy scientist. The Flash in action is unique and not just fast lines and lightning bolts. Barry jumps over cars and essentially Manapul draws in ghost images of him to give him a sense of where he’s been and where he’s going.

At this point, is it even a surprise that Geoff Johns is putting out a fantastic book with another fantastic artist? That was a rhetorical question because no, it isn’t. The fact is, this book doesn’t even feel like a first issue and in a lot of ways it’s not. If you’re familiar with Flash, any Flash, then you can pick this book up and it’ll fill in the blanks for you. If you’ve been following Barry’s rebirth, then this book is the pay off. At this point, Wally West fans should probably start asking that he receives the Spider-Man treatment and get his Brand New Day.

Barry Allen and I have a lot in common... Okay not really but we both like bow ties. Follow Dustin on Twitter and FormSpring, ask him anything!
Rating
10