I was beyond excited to get my hands on The Force Unleashed 2. It's my most anticipated title of the year so imagine my joy when the Penny Arcade Expo this year in Seattle gave me access to play the first level on the 360 version. In short, the game is awesome. But more importantly it looks like LucasArts is out to improve the overall experience in every aspect, rather than just rush out a sequel for some quick coin.

The demo began with a short cutscene involving Darth Vader and the secret apprentice Starkiller. It was very reminiscent of the first chapter of the game. The apprentice sternly but obediently taking orders from Vader, the isolation and claustrophobia created by the dim training chamber, the overall dark mood between Sith master and apprentice--- It's stuff we have all seen before. Starkiller is plagued by visions and memories of a life he is not sure he actually lived. While Vader adamantly tells him that he is a clone and that these visions will fade with training, we see another distinct throwback to the original game—Betrayal. 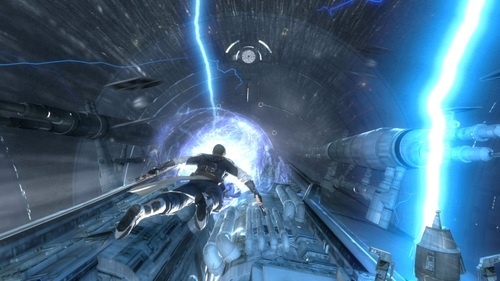 Starkiller explodes into a rage, shocking Vader back to stall him long enough to escape. He blows out of the chamber and enters a free fall high above a Kamino cloning facility, where the player really gets their first taste of how over the top this game is. Falling at unbelievable speeds, the player is tasked with dodging objects in the air or simply blowing obstacles out of their way with Force Push. This is a brilliant opening to the game. It's exciting, visually striking and it demonstrates how much of the environment can be manipulated by the force.

The Force Unleashed 2 handles much like the original. The buttons are mapped in the same way so fans of the original should have no problem hopping back into action. There are some pretty large differences though. One of the biggest problems with the first game was a wonky targeting system. I can happily report that the targeting in The Force Unleashed 2 is nearly perfect. Ripping Tie Fighters out of the sky isn't frustrating like it was in the previous game. At no point was I having trouble locking on to the enemy I wanted to blast into oblivion.

One of the first things players will notice when played The Force Unleashed 2 is how brutal combat is. Your twin lightsabers aren't as forgiving as your blade was in the first game. Lightsabers now slice limbs cleanly from your prey. Arms, legs and yes if you're feeling like Mace Windu you can strike at the neck and sever heads with a single swipe. It might seem like a small change but it totally changes the mood of combat. Starkiller isn't just one of the most gifted force users of all time, he is also a very capable swordsman. A flurry of my saber strikes in the demo often left the enemies in pieces, that's a factor that has been missing from Star Wars games for a long time.

The first level on Kamino serves as a training ground for new force prodigies. While the game tries to wean you into the game by introducing each skill and power at different stages of the level, all the main powers were unlocked from the beginning. I found myself smashing different buttons, clearing different rooms extremely easily until I heard a comment from behind me say “I think they want you to use lightning...” referring to the tutorial prompt that had probably been on the screen for a good couple minutes.

The demo did a stellar job of showcasing all of Starkiller's core force powers. Push, Grip, Lightning, Repulse, they are all back and feel great. Also featured was the new mind trick power which is instant hilarity. Using mind trick can make enemies turn on their friends or even themselves. When I used it, the Stormtrooper promptly turned to a window and hurled himself through it to his death.

Another new power featured in the demo is called Force Fury. As you slaughter your enemies a little icon on the bottom of your screen will fill up, once it does you can push both thumb sticks down and go into something like a force wrecking ball mode. Enemies you could barely topple before are easily lifted and crushed under Starkiller's amazing power. All abilities are amped up to their maximum levels which will prove super valuable when against tougher bosses. 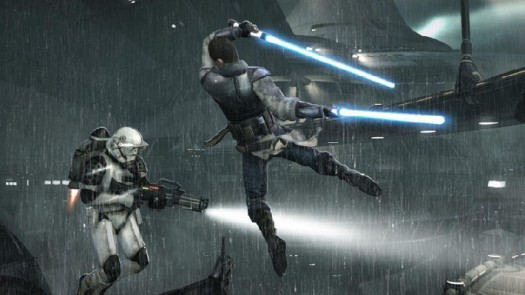 The demo climaxes with Starkiller stealing Vader's signature Tie Advanced to escape. He's safe for now, but anyone who has seen Star Wars knows that Vader doesn't give up easy. You steal a guys ride, he's not going to be happy.