The Future of The Fast and the Furious

Very few film series manage to reach their fifth installment. Be it because of actor fatigue, lack of inspiration, or a dwindling fan base, somewhere along the way, even the biggest and best franchises fall apart. But not The Fast and the Furious; this Friday, Paul Walker and Vin Diesel will buckle up for another round of crazy street racing. So how did we get to this point? And more importantly, where can this series possibly go from here?

Throughout four films, Walker’s Brian O’Conner and Diesel’s Dominic Torretto have toed an awkward line between being friends and adversaries. O’Conner was the law-enforcement character who has trouble following-through on some of his duties. Torretto is a street-tough racer who makes his living by committing crimes. The two share one thing in common: a love of really fast cars.

The two actually haven’t appeared in every film, which I think is one of the reasons the series still feels kind of fresh four films in. Torretto was absent in 2 Fast 2 Furious, while O’Conner missed out on The Fast and the Furious: Tokyo Drift. But at the end of Fast and Furious, the awkwardly titled but extremely high-grossing fourth film in the series, O’Conner has chosen the side of his friend, not his career and the law. 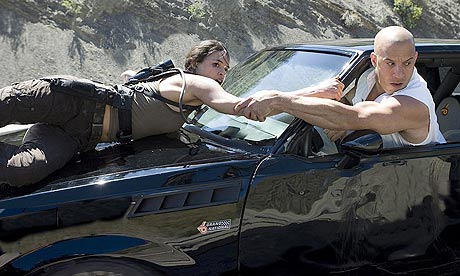 Fast Five makes these two men fellow fugitives in Rio. The new law-enforcement character (because all films like this need one) is played by Dwanye “The Rock” Johnson. He appears to be a badass, but is he as good a driver as O’Conner or Torretto? We’ll find out soon.

But what could possibly be next for this series? How much gas does it have left in the tank? We already know we’ll be seeing a sixth Fast and Furious movie, but what in the world could the filmmakers do to keep this series from going stale? Well, we’re glad you asked. Here are a few suggestions:

The Fast and the Furious: Red, White, and Fast
We’ve visited Miami, Tokyo, Los Angeles, and Mexico. Now, they’re heading to Rio, so what other exotic locales can they conjure up? Sure, a European racing tour would be cool, but it’s cliché. How about dropping O’Conner and Torretto into Afghanistan? Let’s say they get arrested at the end of Fast Five and are sent to jail. In return for an early release, they agree to briefly serve the United States in combat, but the real reason they’re released is because there’s an important race with all sorts of national security implications that the U.S. must win. Admit it, it’s not the worst idea you’ve ever heard.

The Fast and the Furious: Still Tokyo Drifting
Though many casual fans of the series don’t care for Tokyo Drift, it’s actually an extremely important entry in the series—not so much for what happens, but because it broke the chronology of the films up nicely. People aren’t fatigued by these characters because they were completely missing from the series two films ago. If, after Fast Five or further down the road, things are starting to really feel stale again, it might not be a bad idea to revisit Tokyo for a sequel to Drift. Is that a story fans are dying to hear about again? Probably not, but it would give us a break from the usual gang of characters.

The Fast and the Furious: To Hell and Back
Did you see this year’s Drive Angry? It’s OK, no one really did. But as schlocky as the film was, there’s some potential for a hit in its concept: A man breaks out of hell to chase down the man who killed his daughter. In Fast and Furious, Michelle Rodriguez’ character, Letty (who was Torretto’s girlfriend), was killed. For a potential series finale, why not go all out. After racing through every major city in the world, send Dom off to hell to find Letty—and maybe kill the devil while he’s at it. It probably sounds silly, but done the right way, this film could absolutely be a hit. If Drive Angry had a name brand attached to it, people would have flocked to it and would have eaten it up.

We’ll find out Friday exactly where Fast Five takes us, but if the set-up is there for a trip to Afghanistan, Tokyo, or hell, we’ll only ask for a small fee in return for our brilliant ideas.