The Good, the Bad, and the Ugly: The Recent Films of Woody Allen

Looking back over the last decade, few filmmakers have been as busy as 75-year-old Woody Allen. In fact, he’s directed at least one movie every year since 1981. But a quick glance at his filmography will show you that the majority of his most beloved pictures come from the last century. His post-2000 career has been less than stellar, and this is coming from a huge Allen admirer. Trust me, you’re not going to find a bigger fan of Crimes and Misdemeanors, Manhattan, or Hannah and Her Sisters. But I’ll be the first to admit that he’s been off recently (Cassandra’s Dream, anyone?).

His latest, Midnight in Paris, however, has been a big success on every level. Critics have gone wild (Paris currently sits at 92% on RottenTomatoes.com.), and audiences are flocking to art-house theaters to catch the film. In its opening weekend, Paris earned just under $600,000 in only six theaters, for the biggest per-theater average of 2011 and one of the largest of Allen’s career. And it’s showing no signs of slowing down. In its second weekend, it came in at number seven on the box office charts, earning $2.6 million on just 58 screens!

So has Allen entered a late-career Renaissance? Or is this just another Match Point- or Vicky Cristina Barcelona-esque blip? Hard to say. But there are a few lessons Allen should have learned from his most recent films. Here are the three things he can do to keep up the success of Midnight in Paris: 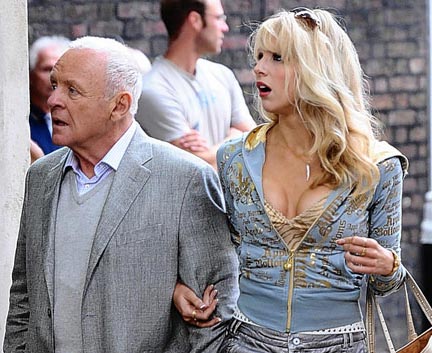 Don’t Rely on a Muse

Nobody is ever going to measure up to Diane Keaton, so why bother trying? But Allen tried, with some success, to replace Keaton—his first muse—with Mia Farrow. And in the mid-2000s, he turned to Scarlett Johansson, who was on top of the film world at the time, to star in three of his pictures. In the first she was great and, as I stated above, really sexy. Then came Scoop, which called upon her to do a lot more than look sexy, and she was dreadful. She played a goofy sleuth and it looked like she didn’t know whether she was in a comedy or a drama. In Vicky Cristina Barcelona, she was a bit better, but Penelope Cruz, Rebecca Hall, and Javier Bardem were in a whole other league. So my advice to Woody: Leave her—and all the other pretty women who’ve appeared in his films recently—alone. No one’s going to be your new Annie Hall.

New York has been played out; same with London. But Barcelona and Paris have clearly inspired Woody and there’s no reason to think other cities couldn’t do the same for him. He’s heading to Italy in 2012. But what about Turkey? I’d love to see a nebbish Allen-type lead to try to navigate the marketplace of Istanbul. Or Russia? Everyone knows of Allen’s love for Russian literature, so this could be a natural fit. Or Japan? Lost in Translation proved Tokyo to be a lovely setting for a romantic dramedy and I think Allen could definitely recapture that magic. The possibilities for great settings are endless.

I hope Allen continues turning out great movies. I appreciate that he still works hard and releases something every year, but I’d almost rather he take a year off sometime to make sure what he releases is the best he can do. But at least we have Midnight in Paris to look forward to as it continues its nationwide expansion in the coming weeks. And next year, we’ll get to see him team up with Jesse Eisenberg for an Italian adventure.