Microsoft hasn’t done much to dispel the belief that the Kinect is just a gimmicky toy for children and middle-aged women.  With games like Disneyland Adventures, Zumba, and My Little Pony Tea Party Kinect representing the system, it would be easy for hardcore gamers to overlook an excellent game like The Gunstringer.

Because of this, The Gunstringer manages to be both silly and gritty at the same time.  It’s narrated in authentic frontier gibberish by a grizzled old cowpoke, and tells a yarn about a feller who was betrayed and murdered - but he was too mean to die, and crawled from his grave in search of vengeance against the sidewindin’ bushwackin’ hornswaglin’ cracker croakers what done him wrong! 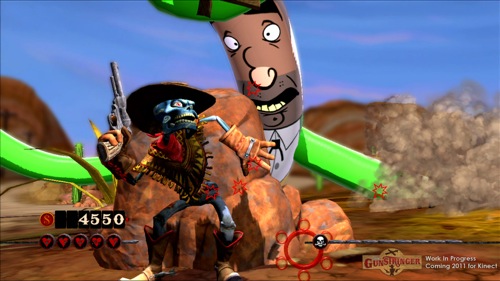 This earnest cowboy tale is told through a puppet show, and the Player uses the Kinect to mimic the actions of a puppeteer; the left hand lifts and moves the cowboy puppet, while the right hand aims and fires the puppet’s gun.  Players can fire guns by kicking their hand up (Like from the recoil of a .45 caliber smoke wagon).  The puppet runs forwards on his own, leaving players to sidestep and jump obstacles, and shoot targets as they zoom across the screen.  While this makes up the bulk of gameplay, the game frequently shakes thing up by adding other gameplay mechanics, like a cover system where The Gunstringer stops running and hides behind something to fight off waves of enemies.  The player makes him pop out of cover and shoot, much like the Time Crisis light gun games.

At other points it will switch to a sideways view for sidescrolling jumping where the player must use precise timing to jump over obstacles in a manner similar to one-button jumping games like Cannabalt.  Then there are stationary turrets where The Gunstringer picks up a second revolver and the player must simultaneously aim two guns at once.  With these varied modes, the game is anything but repetitive, and should keep players enthralled.

While the gameplay is excellent, The Gunstringer also has a unique story-telling method.  All of the action is framed by the concept that this a puppet show performed before a live audience.  The game begins with footage of real people settling in at a fancy theater, and backstage footage of the puppeteers preparing for the show.  This is filled with insider jokes for hardcore video game nerds, because the audience is made of people from the game industry. 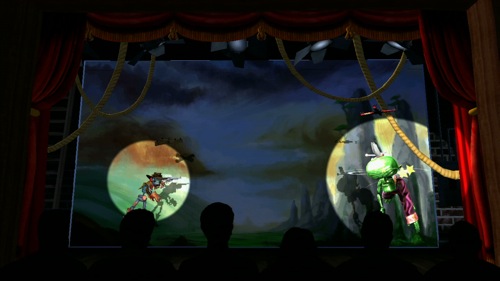 If you recognize even one of them, you should be deeply, deeply ashamed.  Turn off the Xbox, go outside and play.

Other famous nerds (Like the people behind Red VS Blue) offer commentaries on the different levels, and players can unlock these commentaries along with many other goodies as the game progresses.  With all of this, there is a lot of replay value to The Gunstringer, but the developers have gone to the length of putting up some free DLC in the form of The Wavy Tubeman Chronicles.  This is essentially an entirely separate game.  The puppet show concept is gone, and rather Tubeman is a parody of the old lightgun game Mad Dog McCree, and other early 90’s attempts at using digital video for video games.

Wavy Tubeman Chronicles plays like a lightgun game, with a pinch of Dragon’s Lair.  Player can’t move, but rather watches footage of live actors in a (Deliberately) low-budget western movie.  At certain points players will have the option of shooting characters on screen.  There isn’t much to it, but it’s a hilarious spoof of old light gun games and the live action digital video fad of the 90’s.  It also happens to be directed by Lloyd Kaufman of Troma Entertainment (Toxic Avenger).  Tubeman is a product that would definitely be worth 800 Microsoft points if released as a stand-alone XBLA game, but it comes free with The Guntringer.  Hopefully Twisted Pixel will bring us more of this content in the future. 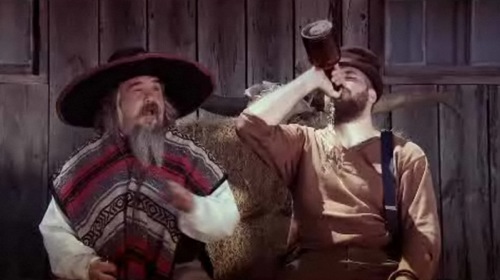 The Gunstringer alone isn’t justification to run out and buy a Kinect, but it is definitely the most compelling reason to buy one so far.  It also shows the sort of potential the system has for shooter games, and hardcore gamers should keep an eye out for future Kinect games by this developer.