By: | Movie News | July 18, 2011
Peter Jackson promised a look at all 13 dwarves in the upcoming The Hobbit: An Unexpected Journey, the first film of a two-part saga, and after five previous promotional stills revealing 12 dwarves, he's added the last and most exciting dwarf of the tally: TheOneRing.net has the exclusive first image of Richard Armitage as Thorin Oakenshield, and he comes equipped with Orcrist, his badass orc-slaying sword.

We've been counting down and sharing with you all the images Jackson's team sent of the dwarves to various publications. This weekend we saw Balin and Dwalin, and you if click here to check them out, you can follow links to the images of all the other dwarves in Thorin's company.

Warner Bros. has this to say about Thorin Oakenshield:

As a young Dwarf prince, Thorin witnessed the destruction and terror wrought when a great fire-breathing Dragon attacked the Dwarf Kingdom of Erebor. After slaughtering many of Thorin’s kin, the great serpent, Smaug, entered The Lonely Mountain and took possession of its vast store of gold and jewels. No-one came to the aid of the surviving Dwarves, and thus, a once proud and noble race was forced into exile. Through long years of hardship, Thorin grew to be a strong and fearless fighter and revered leader. In his heart a fierce desire grew; a desire to reclaim his homeland and destroy the beast that had brought such misery upon his people. So when fate offers him an unusual ally, he seizes the chance for revenge.

It's a nice close-up, but hopefully we'll get to see his full digs at some point in the near-ish future. Meanwhile, I'm thrilled to no longer have to draft up another post to reveal to you a new dwarf image for quite some time. 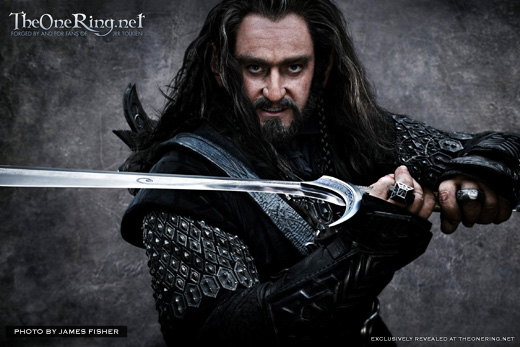