By: | Comic Reviews | November 23, 2011
After an initial issue that ended up raising more questions than anything else, this second entry in the new The Incredible Hulk series attempts to give some answers. Specifically, the aim of this book seems to be showing what Bruce Banner's life has been like since his nasty break up with the big green guy and, more importantly, what his current motivation is. I'm sincerely glad to see that the writer is working towards answering these questions after a cool, but very confusing first issue for the series. Unfortunately, if these are the kinds of answers we're going to get, then maybe the questions are better left unasked.

As I said, this book puts the focus on Bruce Banner, the genius puny scientist that the Hulk spawned from. Up until recently, they were sharing a body. Now that they are finally separated, Banner must have everything he ever wanted. Right? Yup, there he is on page one, chilling on a tropical island with his gorgeous resurrected wife who can turn into a gorgeous red giantess, which has the added benefit of ripping her bikini in all the right places. Yes, good old Bruce must be pretty pleased- Oh, damn, he's brooding. That's right, the issue starts with several pages of the beautiful Betty Ross, the love of Banner's life and one of his primary sources of motivation, telling him how fortunate he is now and proving his fortune, just by standing there. But Banner isn't having it. He wants to go look at radiation and Red She-Hulk bails. Somehow, the guy who used to be the likeable hero is now an irredeemable prick.

Ignoring what comes next for a moment, the sole purpose of this book was to convince readers that Bruce Banner's shift into a completely different character is believable. It plainly fails. Maybe all this malarkey will make a stronger play to those who have kept up with every bit of Hulk continuity over the years, but for those who haven't, there are some very simple expectations. Every 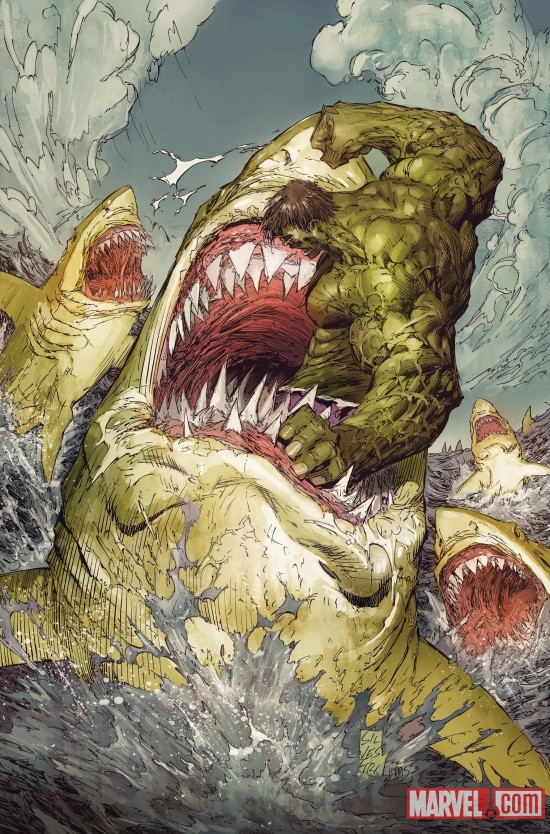 common knowledge interpretation of the Hulk follows these beats: Bruce Banner was a genius scientist zapped by gamma radiation. After this, he turns into an immensely powerful green monster whenever he is angry. The threat of losing control is a constant burden on his life and he desperately seeks a life of peace with his lover, Betty Ross. All of a sudden, the only thing Banner has wanted since becoming the Hulk is not good enough for him. Why? Because it is apparently all he has. The Hulk is his only worthwhile achievement and now a piece of him is missing. Um, bull, bull, and more bull.

The man is a genius scientist in a world full of supercomputers and alien technology. He can start up his career pretty easily. Even now he's making all these new monsters in an attempt to remake the Hulk, so it's not like he's out of practice. At long last, the love of his life is alive again, he still has friends in high places, and he does not have to be afraid of hurting any of them. The Hulk was supposed to be a creature manifested from Banner's anger and buried psychosis. Well, those are both still with him and going strong, so I'm not exactly sure what he thinks he's lost. Honestly, it just sounds like he's pissy because now his wife and his nemesis/father-in-law are Hulks and, now that it's cool, he wants it too. Frankly, this shifty, petty, masochistic sociopath is just not the same character. Personally, if I knew the writers were going to butcher Banner this much, I would have preferred none of this ever happened.

Of course, the Hulk is still around too. He gets introduced once more to the woman from the first issue who cannot seem to overstate how much she is not related to Doctor Doom, despite being named von Doom. Not too sure why this joke was set up to begin with when it wasn't amusing the first time, let alone the third. Apparently, she runs a black ops team devoted to killing mad scientists. Besides the robots from the previous issue, she also has a former mad scientist assistant and a floating brain thing that they don't actually know anything about. They remind me of a vastly inferior B.P.R.D. with a vastly inferior modus operandi. Long story short: these guys are lame. Luckily, Hulk knows that and, once he gets some info from them and beats up some of Banner's big green sharks, he leaps away to go chill with his mole people buddies. The seeds are sown for Hulk's peace to be all too brief, and the book ends.

The best I can say for this issue is that Marc Silvestri's art is still fantastic. Unfortunately, Hulk beating up sharks for a couple pages is forgettable and that is all the action served here. Even so, the creatures and characters are wonderfully detailed and I look forward very much to this series making proper use of his talents. Maybe I'm weird, but I don't tire of seeing Betty or her bigger and better form in a swimsuit.

The worst I can say for this issue is that Jason Aaron's script refuses to answer some questions and gives terrible answers to others. We now know who these guys who attacked Hulk are and we now know why Banner is bonkers, but I profoundly wish we did not. I don't even know what the Hulk is anymore. Originally, it always seemed that his quest for peace was born out of Banner's same feelings. Now they are finally split up and Hulk seems to be the amalgamated qualities of both characters, while Banner is just a generic madman. Maybe Banner was the monster all along? Yeah, we get it. Everyone else is the monster, not the Hulk. Even himself now, apparently. Honestly, it's not thought provoking at this point; it's just pedantic.
Rating
5.0