I picked up Infinite Vacation expecting it to be one of those independent books that deals in the idiosyncrasies of daily life, you know... one of those soul searching coming of age stories like Box Office Poison or Brooklyn Dreams. But boy was I wrong! Well... Maybe the soul searching part could still be there.

Infinite Vacation is a sci-fi book that deals in characters taking vacations in infinite realities the joy of the multiverse at the hands of men, if they pay for it that is. The book has a very unique concept, its part Sliders part Quantum Leap and a hundred percent awesome! Now the book does not only deal in vacationing in alternate realities, it is a murder mystery; our main character Mark, is being target by someone. Why? We don't know but the "Marks" from different alternate realities are being murdered one by one and our main hero is not far behind. 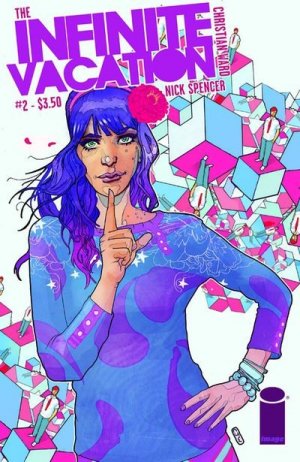 In this issue we find different alternate Marks: the hacker, specialist in identity theft, redneck mark, brute force and nudist mark, yeah he is very nude. The gang rescue the original Mark from the reality police; they switch him with a pedo Mark and they tell the original Mark that his genetic make up is unique and is the reason the bad guys are looking for him. They tell Mark to lay low. Mark is forced to be a deadender (the people that don't care for any alternate reality stuff) there he meets the girl of his dreams. Later we see that the head of the Infinite Vacation company is the one that is looking for Mark, this guy hates disappointments and calls on cannibal Mark; he orders cannibal Mark to kill the reality detective that captured pedo Mark oh and by the way the detective is also an alternate reality Mark.

Well that was a bit confusing right? But once you read the book you will not have any problem catching up. This book is smart, funny and ten times of cool. Even though it deals with a lot of alternate characters of the same character, it all feels like they are different characters. The characterization is spot on, every character has their own unique voice. The story also cuts to a kind of infomercial or news report that helps the readers catch up to this complex story. It also gives the tone  of the book an edge over other comics out there, since when this scene comes up, is done with real life pictures; rather than traditional drawing. It also gives a sence of breaking the fourth wall, without actualy breaking it. It is all well structured and it is clear that the writer knows what he is doing.

As for the art. The art is georgeous is looks like it is made with water colors right from the pencils. The style  borrows  from David Mack but at the same time finds time to form Its own look. The art is simply an orgasm to the eyes of the readers. Like the writing, the artists knows the structure, the rhythm and the precise look every character and detail of this world should have.

Discovering this book is like ripping your mind and letting it go on a Infinite Vacation. The only bad thing thing about this book is that I have to wait another month for the next issue. Its a five issue limited series and its on the right track to becoming an excellent graphic novel.