The Intrepids, is a new monthly from image comics. Written by Kurtis J. Weibe and drawn by Scott Kowalchuk. The story centers around a group of augmented or altered humans, who fight the good fight against mad scientists. This book plays in a mix of 50's pulp and 40's noir. Here you will meet Doyle (the strong guy) Chester (the gadget expert) Rose (rocket girl) and Crystal (the sharpshooter) they were all forgotten children picked by the mechanical engeniring prodigy named, Dante. In the book we get thrown in the mist of a mission, the Intrepids are hard at work sabotaging the plans of a mad scientist. This mad scientist has a love for altering animals into savage killing machines. In this case is a cyber bear, that for some reason looks a bit like a care bear on acid.

Aside from that we also see a couple of flashbacks showing how Crystal was picked by Dante and later it gets mention that she has an optic tracker implanted. Unfortunately the mad scientist was nowhere to be found but thankfully his plan was foul. the group then received another lead, about a hitman that is working with Doctor Koi an arch nemesis of Mr. Dante. The comic shows how Dante and Koi were once lab partners in Harvard and how Koi betrayed Dante by stealing his research and using it for profit. You see, Dante believes that his inventions of mechanical limbs, could help people with needs and Koi believes that he can use that technology to augment human's abilities. The two men go their separate ways; mirroring the relationship of Reed Richards and Victor Von Doom. However the group is now set to intercept Koi's hitman. As the group is close to ambush this hitman, an altered baboon is behind Doyle and Crystal and it seems that they are the ones that are going to suffered an ambush. The issue ends there, leaving the reader with a cliffhanger. 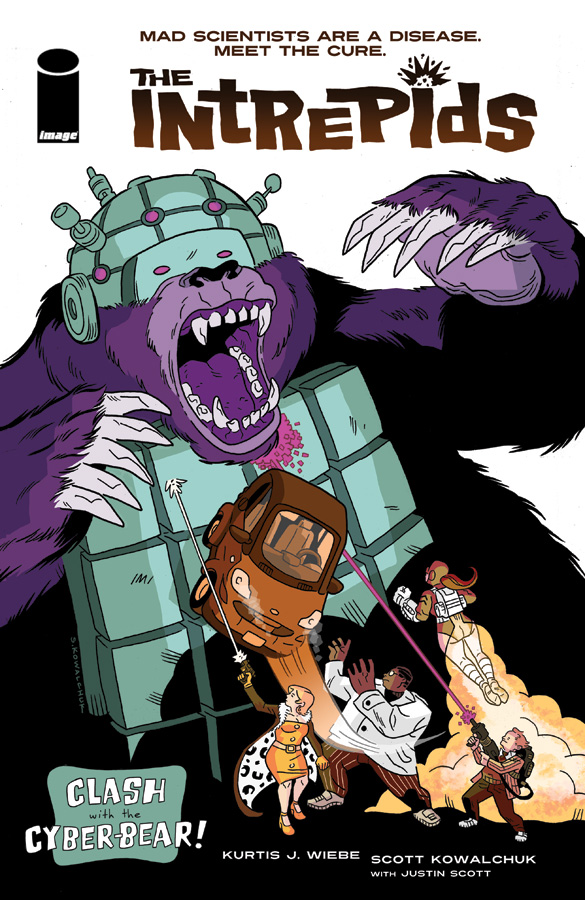 Now I have read my share of first issues and I know the importance of making an impact right from the start. This book however forgot to do that part. We get thrown into this new universe right away and the reader must follow these characters without any idea of who they are. The issue doesn't offer any type of character development that could be note worthy. Although the action is carried like a spy novel and is well structured, the lack of strong characters at least in this first issue doesn't help the readers to relate to any of the characters. Heck, I had to look up their names various times because I couldn't remember who they were. The only note worthy thing that the reader will carry after reading this issue, is the Cyber Bear and the killer Baboon. This concept of killer animals is crazy but it either works as a serious Sci-fi story or as a comedic adventure. The Intrepids however hasn't decided on this angle yet. Frankly the story has nothing that any old or new pulp hasn't offerred before. What can make this story strong is, for the next issues to show a strong character dynamic and an exiting twist to the genres the book is playing in.

If you like retro art, then the book is graced with georgeous retro drawings. Reminiscing of Darwyn Cooke or Scott Morse's style, yet with Kowalchuk's own touch of originality. As far as the art is concerned this book delivers. Kowalchuk has a good eye for design, from his characters to the backgrounds they inhabit. This book's strength is the art. Sadly not everybody digs retro art in a mainstream market. If this type of art is your thing then by all means check this book out.

It is too soon to label this book as anything note whorthy. The first issue doesn't give any incentive for the readers to come back (unless you're into killer baboons). If you pick this book up give it a chance just for the art and maybe to see if this first storyline goes anywhere. if your Wednesday fix needs an alternative option, this is out there but if not then stick to your regulars.