The Last Of Us Review: Brutal Mastery

Naughty Dog is an amazing developer that manages to pull off graphical fidelity and experiences that noone else seems to be able to replicate. Uncharted 2: Among Thieves set the bar incredibly high for interactive experiences to come. It was a perfect blend of action, narrative, adventure, romance, and explosions. There is a lot to live up to, and an almost insurmountable amount of expectation. Naughty Dog continues to change the notion of a interactive experience with The Last Of Us. It is a poignant, grim, brutal, and cinematic tour de force. It is also one of the most affecting game experiences I've ever had.

Post-apocalyptic games usually revolve around the 'fun' of being in a zombie apocalypse rather than the perception and relationships of the people within it. The Last Of Us takes the latter approach and does the concept of post-apocalyptic justice. Joel and Ellie are wonderfully written characters and share great drama (And close calls) throughout the entirety of the narrative. Ellie specifically, is one the most well developed characters in recent memory. You see her grow from juvenile delinquence, to pitiable product defined by the harsh world around her. She, and her relationship with Joel, is the driving force behind The Last Of Us' narrative and theme. It is a story that will forever be embedded in my memory. Spoiling it, would be a damn shame. 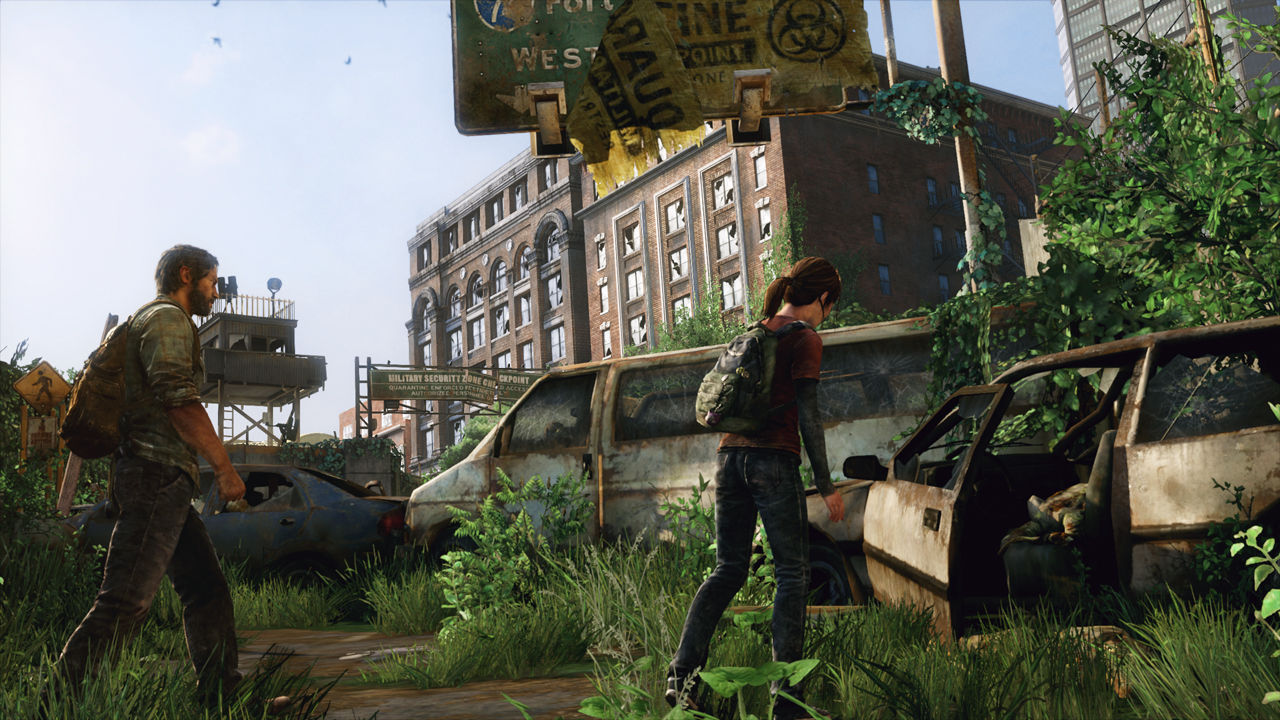 Naughty Dog has always been known for pushing graphical boundaries being able to pull off real-time oceans, and graphical miracles, that never seem to phase the framerate at all. It is truly impressive and especially with the case of The Last Of Us which pays more attention to the detail rather than the spectacle. This is especially well shown inside the buildings that people once resided in and all their memories seem to have stayed.  All their belongings, toys, pictures, travel bags, everything. It creates a grim and somber tone that is held throughout the game and the attention to detail makes it all worth it in the end. The game from a presentation standpoint is frankly, breathtaking. How seamlessly the shrubbery grows over the torn, desolate landscape has a sort of grim-like beauty. The animation for both Joel and Ellie are fantastic, and signature to Naughty Dog, they will occasionally perform a subtle character animation when walking, standing, or taking cover that lends to the overall immersion. Facial animations also look spectacular and the little environmental touches, like the breeze blowing window curtains is a wonderful touch that you could completely miss, because it is small, but when you catch it, you realize this is a living, breathing world. Even if there isn't a whole lot of human breathing anymore.

Voice acting is phenomenal as well, with great lead performances from Troy Baker and Ashley Johnson, but also from the supporting cast, who for the most part, don't stay around for very long when they are first introduced, but do make make some impact. Gustavo Santaoalla's soundtrack is very understated and somber, lending an subtle emotional touch to the wandering around the grief stricken land. 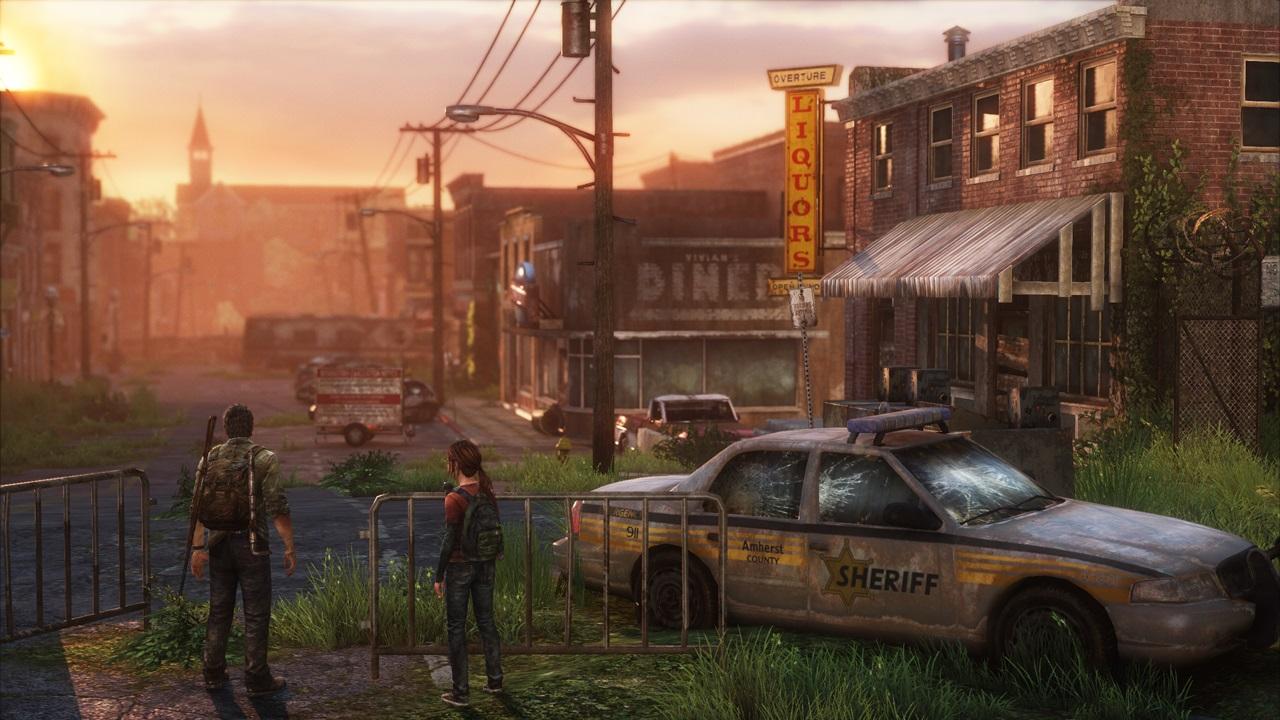 The Last Of Us' gameplay is sublime. There is no other game that plays quite like it, and that's what makes it all the more interesting to play, but it is also not necessarily fun to play however. It contains inconsistent mechanics that may or may not appeal to everyone's taste. Sometimes it is not a very fun game to play, but that isn't necessarily a bad thing when the game knows this and it's deliberate, which for the most part, The Last Of Us does. The game breeds a tension that I've never experienced before. It always keeps the player on his/her toes, because Joel isn't the most invulnerable of video game heroes, he can die in a heartbeat if you aren't careful. Anytime there was a stealth section, I found myself gripping my controller, till white knuckles could be shown, because the game allows tension to be built up organically rather than artificially. Exploration is the most important part of the gameplay systems the game introduces. Surviving in this world requires scavenging of supplies and ammo to create health kits, weapon upgrades, shivs, etc. Ammo is perhaps the most rare commodity in this world, and it is very scarce. Leading you to rely on other types of survival rather than gunfire.

These leads me to one of the game's issues. The game doesn't seem to know whether it wants you to utilize your ammo effectively or to conserve it, because the game throws scenarios at you when you have to utilize your guns, but enemies take three or four bullets to take down if you're are not going for headshots. This wouldn't be an issue if the game gave ammo to you in fairly large quantities, but it doesn't, which works for the game's overall feel even if it becomes occasionally too overindulgent. Every bullet that doesn't kill an enemy or misses feels just as awful as a zombie that bites into your flesh, which is an amazing piece of design that they themselves didn't implement, but it feels like the player has been cheated rather than rewarded.

Also companion A.I. is great overall and they lend 'actual' assistance to you, but enemies don't notice them when they are out in the open, or when they step out of cover, which makes sense from a design standpoint, because nobody likes escort missions, but from an immersion standpoint, it drops the ball. There are also enemies in the game called "Clickers" that rely on hearing. Your companions sound like a pack of wild buffalo when compared to your footsteps, and they pay no heed to them, and even when you do get caught by clickers or ordinary runners, they still only come after you, paying no heed to the other walking pieces of human flesh next to you.  There is also an unexplained reason why clickers can break your guard and insta-kill you.  The reasoning is murky and is never explained. If I can shove runners off of me, why can't I shove clickers off of me? The gunplay is very sluggish, shaky, and brutal. It feels good in the players hands, even if occasionally you'll miss a shot due to Joel's shaky hands. Cover works very well for what is is, and the guns feel very mechanical and heavy. Gunfights felt like something out of a western rather than a modern, military shooter. Bullets feel impactful, the environment gets shredded form the impact, and a lot of the weapons feel cobbled together from spare parts. Melee attacks are very brutal and satisfying, and I more than once relied on it rather than gunplay, to pass a heavily guarded area. 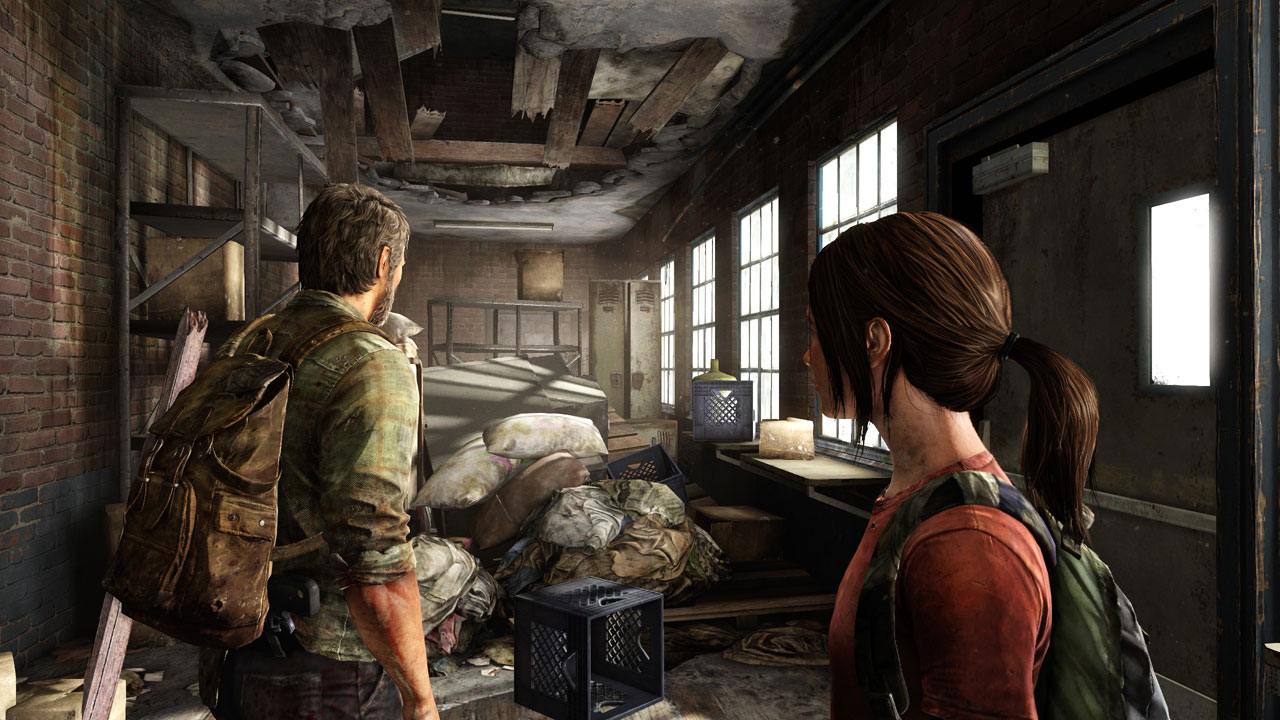 The Last Of Us' multiplayer is equally full of tension. Naughty Dog has always taken the important single-player elements into the multiplayer aspect of their games.  In the game's case, the multiplayer, otherwise known as Factions mode, is all about survival. You must take into account your tactics and strategies from single-player into Factions mode as well. If you are too loud, you will be seen on the minimap. It rewards patience and thought as it isn't your typical run-and-gun fest, but rather a methodical game of desperation. There are a number of moments in multiplayer that were palpable tension, including getting the drop on a player trying to survive as you have and making you feel like a true survivor. Plus it features a relatively clever altering goal system, where it gives the player a number of options to go about playing the game. Should I heal more teammates, or snap more necks?

The Last Of Us is a difficult game to critique, because its so well made. Its most minor of inconsistencies stick out like sore thumbs more so than they would in an averagely made game, because the rest of the game is masterfully constructed. The wonderful changes of pace are fantastic as well.  Every combat encounter I had was incredible, exciting, thrilling, frustrating, terrifying, and perfect. It is Naughty Dog's finest game, but not necessarily from a design standpoint, because everything that's fantastic, and infectious about the package are things you can't make, they are things that happen. The writing and the characters are some of the best in the industry, but it's entirely on how the player perceives it. The Last Of Us gave me everything I wanted from a Naughty Dog game, it's exciting, unflinchingly brutal, and fearlessly grim in its execution. It is a meditation on who we could become as individuals given the harsh circumstances and what we would do to keep those we love even closer to us. Brilliant stuff, indeed.