The Magdalena is yet another weapon wielding generational based heroine in the Top Cow Universe. When Christ died on the cross Mary Magdalene was baring his child. Hence forth the bloodline of Christ has remained unbroken and each generation selects one girl as, you guessed it, the Magdalena. She serves the hidden order of the church as their weapon of justice and vengeance. They yield the Spear of Destiny as their weapon in their battles against demons and hell.

The emphasis of the issue is that there can only be one Magdalena per a generation, the problem is that the current Magdalena (Patience) has decided to no longer serve the church. Kristof is sent by the church to either bring her back to the flock or take her out of the picture for good. It’s apparent in his dialog that he has feeling for Patience and wants to keep her as the Magdalena. Kristof feels that she’s the only one to deal with the current threat… The anti-Christ! The church gives him a chance with Patience or they will start training the un-named blonde waiting to replace her.

The issue does a great job of giving new readers to the Magdalena series a jumping on point, but does little else. Ron Marz (Witchblade) was tasked with not only explaining the origin of the character but setting up the threat that she’s to face and introduce some sort of supporting cast. The problem ends up that the star of the book Patience, which is a horrible name for a character, is spoken about more than anything else. The story is pretty good, but really fails to capture any sense of excitement or danger. I think the safe bet here is that the anti-Christ losses, it’s really that transparent. 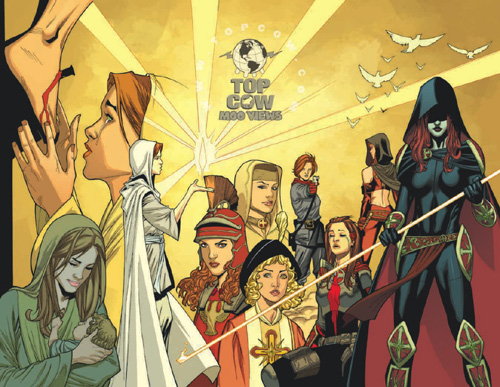 Nelson Blake II (The Ride) pencils a strong action heavy story. His art is detail enough for the story but his backgrounds are static and dull. There’s simply no life to the backgrounds. He makes an interesting choice of not making Patience, who is essentially a nun, plain and not overtly sexy which is typical of most Top Cow females. He’s able to make her beautiful and give her personality a visual that her dialog was lacking. Hopefully as Blake becomes more familiar with the characters he’ll become more tuned into the details of the world around them, and then the world will truly feel alive.

For a first issue the book is just okay. Anyone who’s read something from Top Cow’s Universe before will find a familiar story. If anything that’s the problem with this book, it doesn’t stand out from the rest of the Universe but rather falls right in-line. Patience needs to stand out and become her own character if she’s going to carry an on-going series, or risk becoming a supporting character in the Top Cow Universe.