Exactly thirty days from yesterday is when Halo: Reach launches. We’re so close we can almost taste it, and yet for a lot of us time as slowed to a crawl. Now nothing but constant Halo news can distract a person from their monotonous Reach-less days. Lucky for you, week 3 of The Monitor has arrived!

This time around we have new gameplay videos, feature details, and even an opportunity to win a new Halo: Reach Xbox 360 bundle!

What happened this week?

No sense keeping you in suspense. As long as you have an email address and a few minutes to spill your heart out, a new Halo: Reach Xbox 360 could be just a couple clicks away.

Spawnkill.com is hosting a contest running through September 1st giving you the opportunity to win big. Simply follow the instructions on the page, and leave your entry in the comment section below the article.

For more details and your opportunity to win a Halo: Reach Xbox 360 Bundle, click here!

When you’re done, come on a back. There’s plenty left to see before you tear into your new Xbox!

With still a month left to go, Halo: Reach is currently topping the pre-order charts with nearly 913,000 according to Vgchartz.com (http://www.vgchartz.com/preorders.php)

To give you an idea, last week produced about 140,000 new pre-orders. Since VGchartz is updated every Tuesday, it’s very possible that Halo: Reach could break the one million mark two days from now.

Ten years ago in Halo: Combat Evolved we were jumping into warthogs and racing around Sidewinder with our friends. Bungie remembered, so this time around they introduced the “Race” variant into their matchmaking. This fall we’ll be blowing our exhaust all over Xbox Live rather than suffocating our friends in the isolation of our basements. This week more details were released on "Race."

Not only will there in fact be online play, but this checkpoint-based race variant also includes land mines to slow your opponents down (to say the least.) Not only will one cause devastating damage to your vehicle should you pass over one, but if you get close enough without blowing yourself up you can essentially turn it into a ticking time bomb. Bungie explains below.

“If you get close enough without making direct contact, you’ll prime the landmine for an imminent explosion. If another racer is in hot pursuit, it might just blow up right in their face as you put the hammer down and head off into the sunset. It’s kinda like a green turtle shell, only there’s way less animal cruelty and absolutely no psychotropic drugs involved (oversized, wild mushrooms are bad, m’kay).” - Bungie

Your Spartan Goes Where You Go

Previously our Spartan customization options were limited to the boundaries of matchmaking, but this week Bungie made clear that your custom Spartan will appear in every mode, including campaign. Noble 6 will essentially br the Spartan you create and your modifications will even appear in the cut scenes.

With the introduction of Forge World a few weeks ago, Forge vets and newbies alike were salivating at the endless possibilities it could provide. This week Bungie has announced that these possibilities will remain endless with a $10,000 budget, one that dwarfs Halo 3’s 1,500 maximum. 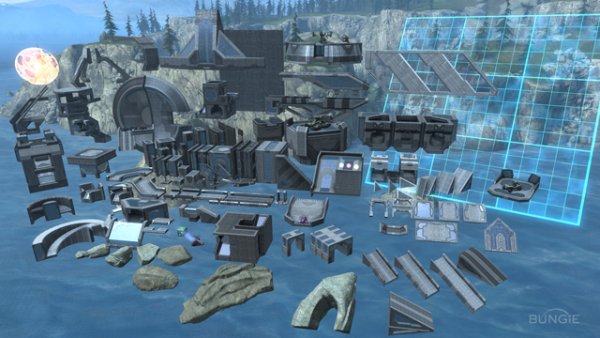 Just so this doesn’t get lost in the excitement of the following videos, I figured it’s best to drop this here.

Bungie has announced that they have some time this week at the video game event Gamescom. They’ve confirmed that there will be new information on Reach released, but some predict that it might be even bigger than Bungie is letting on. We’ll have to wait and see, and of course you’ll be able to read all about it in next week’s Monitor.

The following videos include gameplay from all three of the maps that were announced in last week’s edition of The Monitor. Feast on your eyes on these beauties in action.

And now for the Halo equivalent of watching paint dry, for reasons unknown I present a short video of someone camping!


To make up for that as well as wrap up the week, I leave you with a Bungie-approved hilarious fan video. Viewer discretion is advised. See you next week!

This week was a special one for me. I got to tap back into my not-so-far-gone youth with a Halo series run-through. Before the release of a new Halo title I always hunker down and play through each predecessor, and every time the journey gets longer and longer (in a good way!) It’s usually a euphoric experience, and it’s also usually alone.

This time though, I reunited with some of the friends who introduced me to Halo: Combat Evolved all those years ago for what might have been the final time. With some going off to school or jumping head first into real life, we may never find another time to get together. That doesn’t matter though, because this time was truly amazing.

Through the years some of us grew distant due to the choices we made and the lives we chose to live, though once we started up CE’s first mission we were little kids again…best friends again. We laughed at the same old jokes, shared the same old passions, and I even relapsed on my soda addiction just for the occasion. I was “sober” since April 1st.

For four days we pulled our focus from work, stress, and life to meet up over Xbox live or in one other’s basement. It was four days of pure passion and happiness. I was completely submerged in what I loved and I could fully feel why Halo means so much to me.

Halo is my fountain of youth, my freedom, my personal portal to joy. When I play a campaign I'm right back to the happiest moments in my life. Halo is my drug, my escapism. It’s something that exceeds the limitations of controller and console. It kissed the very essence of my soul. While I venture into my future and look for the happiness it will surely bare, I’ll always have something I can hold onto from the past. Something I’ll never let go of.

See you next week.