Michael Gary Scott is the epitome of awkwardness. He symbolizes every awkward moment of our lives, and every friend we have that embarrasses us with the foolish decisions they make, the ones we would never make. Watching Michael Scott in action is painful, because he lacks awareness. He doesn’t realize when he’s being an idiot, which means we’re forced to suffer the embarrassment. I’ll admit it: there’s never been a fictional being that has made me as uncomfortable as Michael Scott does at times. But that’s what I love him for. He elicits a strong emotional response from the audience, whether for good or bad, and in last night’s episode, “Body Language,” Michael Scott was at his most awkward, leading to many frustrated groans, laughs, and a surprisingly touching end scene.

“Body Language” brought the return of Donna (Amy Pietz), a woman that Michael met at a restaurant; she’s a sexy, long-haired bar manager who seemed to have an interest in Michael in the episode “Happy Hour,” and we see her arrive at Dunder Mifflin, looking to buy a printer. From the moment she arrives, Michael dons his flirting persona and never lets up. He hits on her and constantly looks for opportunities to kiss her. If I could have a dollar for every time that I stuck my face in my hands, covering my face and repeating, “No, no, no, Mike.. Why are you doing this to yourself,” I would be a rich man. The office attempts to help Michael figure out her complex body language. Everybody in the office believes that she’s flirting with him to get a discount on a printer; only him and Pam truly believe she’s interested in him. There was also a section of the episode focused on Dwight attempting to enlist our favorite customer service representative, Kelly Kapoor, into one of Sabre’s new minority incentive groups meant to show their open-mindedness. He believes that if somebody like Darryl, who is smart and clever, gets into the role, he may eventually be in a position to boss Dwight around. He believes by replacing Darryl with somebody like Kelly, he won’t have to worry about a powerful boss in the future. However, he under-estimates Kelly and her conniving ways.


While I had some major hang-ups over last week’s episode, this week left me in perpetual state of laughter. Whether it was Creed’s typical insane yet hilarious line of the week ("You ever notice you can only ooze two things?  Sexuality and pus.  Man, I tell ya.."), Michael's awkward attempts to get a kiss from Donna or Dwight's attempts to prove that Kelly is a Caucasian instead of an Indian, there was something for everybody here.  My only problems was how painfully awkward and unaware Michael can be sometimes.  It's one thing when Michael says something embarrasing or foolish; it's another when every single move he makes oozes awkwardness.  I laughed the first couple of times he tried to kiss Donna, but by the time the episode was ending and Michael was pushing her up against a wall in a strange attempt at a smooch, I was sick of it.  Luckily, we had some great acting all around.  So far, Amy Pietz has knocked it out of the park as Donna.  It's nice when Michael is able to have some sort of love life.  He's certainly not the most ideal partner to have in a relationship, but he shows his girlfriends enough affection and adoration to make them happy.  For the most part, at least.  In fact, his relationships in the past (with the exception of Carl) tend to end due to some other reason other then himself, which is interesting.  It should be entertaining to watch Michael and Donna's relationship unfold. 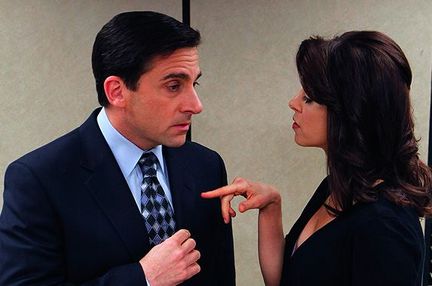 The episode was a reminder (at least for me) that Season 6 hasn’t been a total dud. There’s been plenty of strong episodes and hilarious moments to make up for some of the awful ones (“Mafia” and “The Banker” are easily at the top of that list). If I could have changed one thing about the episode, it’d be Pam’s involvement. Pam’s performance on the show peaked in Season 3, when she was attempting to come into her own as a single woman and attempted to prove she wasn’t afraid to stand up for herself and speak her mind. Although Jim and Pam are certainly one of the greatest television couples of all time, after they got together, things got less interesting, and while Jim has remained nearly the same, Pam has become a goofy, exaggerated version of herself. Watching her attempt to joke around with Jim and other people in the office was painful to watch, and hopefully, the writers will eventually remember what Pam’s character used to be like and focus on those characteristics.

As awkward as this episode may have been, it was nowhere near the all-time most excruciating, painful-to-watch episode of “The Office”.  For me, “Phyllis’ Wedding” represents a failed attempt at dry, awkward humor. It’s nice when the show can find a balance between normal and absurd. “Body Language” nearly derailed, with Michael’s personality taking the reigns for most of the episode, but the ending, with Donna and him finally kissing, more then made up for it. It’s mostly a reminder that even the most embarrassing moments can end on a touching note.