After Community’s absolutely outstanding animated Christmas special and 30 Rock’s hilarious episode, I was pretty hopeful for The Office’s hour long holiday episodes, especially since it would be Michael’s last go around in the Santa outfit. It wasn’t the best episode of the night, but it didn’t embarrass itself in comparison either, and while I think Holly brings out the worst in Michael, bringing her back gives the show an opportunity to really bring a satisfying end to his character arc.

Let’s go character by character, because there was a lot going on in this episode. Pam probably had her fingers in the most pies tonight, as she was everywhere in her role as office administrator. She brings comfort to Michael when he’s struggling with the reality of the Holly situation, and when Darryl is depressed about his daughter not wanting to spend Christmas with him, she distracts him by getting him to help get a real tree for the party. Later when he brings his daughter to the party, she tries to come to the rescue by providing activities for her. Andy screws it up by not understanding what a child would be interested in doing to find a Christmas star, but Darryl brings her a bit of happiness with the help of gifts for everyone from the vending machines. 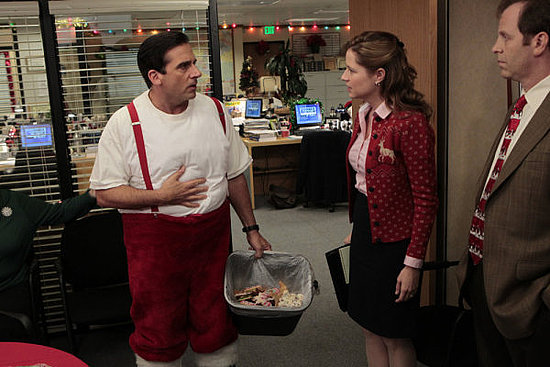 The biggest thing Pam had though had nothing to do with that role, and instead focused on her role as Jim’s wife. He blows her away every year with his sentimental, homemade Christmas gifts, so she tries to return the favor by making him a comic book, about him getting bit by a radioactive bear while riding his bike in the woods and becoming a super hero. She shows it to a couple coworkers for their input, but she gets a bit worried when they aren’t totally impressed. Phyllis is worried that she and Jim are having money problems (Phyllis is funniest when she’s being condescending), and Ryan criticizes the plot and says the book is derivative of another about a Bear Man. But after Jim surprises her with expensive jewelry (an odd moment since it suggests that it’s better than any heartfelt gift he could have given her), he’s even more impressed with what she made. It’s a happy Christmas for the Halperts.

It wasn’t the best holiday for Jim though, because after hitting Dwight in the face with a snowball for scoffing at his pleasure in seeing the first snow of Christmas, his life becomes a living hell when Dwight thoroughly thrashes him in a snowball fight, even drawing blood, and he continues to haunt him with ambushes around every corner. Jim tries to retaliate by hitting him with a ball with his lacrosse stick (Jim plays lacrosse?), but he breaks a window instead and gets reprimanded by Michael and Holly. It’s a bit ridiculous that Jim gets most of the blame when he could just point to the dried blood on his shirt as an example of how extreme Dwight made this competition to begin with, and the episode ends without Jim ever really getting back at him, instead having him driven to madness by a parking lot full of snow men that Dwight could be hiding in. It’s a pretty dark ending, and pretty extreme even for Dwight.

But I guess I should get to Michael and Amy Ryan’s Holly, though that actually begins with Toby. It’s been a running plot all season that the Scranton Strangler, a local serial killer, has been at large, and supposedly was caught in recent episodes. Toby announces he will be leaving work for a while for jury duty, and slyly lets his coworkers know it’s the Strangler trial. This excites the office’s imagination, and also creates an opening for Holly to return temporarily to fill in for his HR position. It was nice seeing what was basically a running joke become useful to the plot, and watching Toby desperately hoping that his popularity for being on the jury will result in people actually liking him after it’s over is both funny and sad in the way Toby usually is. But what’s important is that Holly is coming back, and it’s so important that Michael cancels the Christmas party so they can throw another one when she arrives.

Not just any Christmas party either, but a sophisticated one, with Michael dressed as a suave, thin version of Santa and a single jazz bassist providing the music. I’d think Holly would prefer a traditional Christmas, but Michael is again blinded by his love for the one that got away. Her arrival provides the usual hard-to-watch silly banter, and things seem to be going well until Michael realizes that she’s still dating A.J., played by Rob Huebel. Not only that, but he now shares the two’s love of Toy Story, symbolized by a Woody doll he gave her. Michael is understandably upset that her relationship with A.J. would survive relocation when theirs didn’t, and lashes out in his typically childish fashion by dropping Woody in the trash and pouring coffee on him. It results in a pretty ugly confrontation where they both say what’s on their minds and the office seems to be on Michael’s side, but it manages to cool off before it becomes a complete disaster.

It’s not a complete lost cause for Michael though, because he overhears Holly making an excuse for the damaged to doll to A.J. later when he shows up, and Pam tells him about a conversation where Holly says she’s going to give him an ultimatum for a marriage proposal before the end of the year or it’s over. So there’s still hope, although I suspect that things will get worse before they get better. It’s a bit of a rough story and overshadows the Christmas aspect somewhat, but there were still plenty of nice Office moments. Kelly is still a minority executive in training, and the Hello Kitty laptop cover subsubplot was mildly amusing. Dwight’s costumes for everybody in the office were funny. Erin continues her streak of having little relevance to the plot but having a funny running gag, this time completely not understanding the appeal of Holly. Apparently Angela’s new boyfriend is a state senator, and her joy in showing him off is cute, although Oscar seems pretty certain that he’s actually gay. This was the last episode for over a month, so we’ll have some time to ponder what’s going to happen in “The Ultimatum”. My bet is that something pretty awkward will happen that will make viewers want to cringe, or possibly cringe involuntarily.