How you feel about this episode obviously depends on how you feel about Michael Scott as a character. I've always thought that while he got himself into a lot of the same excruciating situations as his British counterpart played by Ricky Gervais, Steve Carell's take on the general idea of a boss who tries too hard to be funny and doesn't know the limits of what's acceptable for a man in his position has always been a little more benign, and ultimately more likable. So while it's a bit odd to see all of these other characters sing a song to a boss who's mostly embarrassed and offended them for the last seven years, and especially for a couple of them to tear up when they find out he's secretly leaving a day early, I ultimately bought it.

Yeah, he does ethnically insensitive impressions, but because he's oblivious, not racist. Yeah, he sometimes degrades the appearance of his employees, but it's because he believes they can make their lives better, not because he doesn't like them. Just compare his actions with Andy to those of Deangelo's a couple weeks ago. Andy has the worst record of any salesperson, but Michael still, perhaps foolishly, gives him ten of Dunder Mifflin's most important clients because he believes he has the ability to keep them. When Andy was trying to ingratiate himself with Deangelo as the funny guy, Deangelo took glee in him harming himself and even ordered him to drink soap. It's no contest. Michael is kind of an idiot who loves the people he works with, while Deangelo is an idiot and an asshole. The office will miss their old boss, and I'm sure they'll miss him even more when they find out the new one isn't even good at his job. 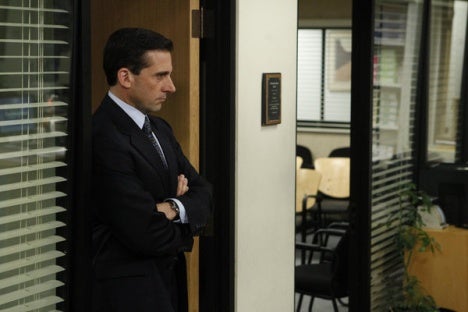 I said before that part of why I liked Will Ferrell as Deangelo was that it wasn't quite the standard Ferrell performance, although it definitely felt like one in this episode. Vickers was mostly on the sidelines with it being Michael's last couple days, going on a business meeting with Andy to see one of his new clients. These scenes were pretty revelatory. Not only do we learn that he's only with Sabre because he saved Jo's dogs, but that he's not even good at doing it. The business meeting is a funny scene, but it also kind of sticks out in the way it makes its point when the rest of the show with Carell was pretty down to earth. I mean, I've seen some pretty bad salesmanship while watching this show, but even in a world as wacky as The Office's, it's hard to fathom someone thinking it's a good idea to compare buying from his employee to playing Russian roulette. One of Michael's redeeming qualities has always been that while he's clearly lacking in management skill he was still a damn good salesman, and the disparity between him and Deangelo flailing around during the meeting was obvious. It did help solidify the significance of Michael leaving, thought it might have been able to do so a bit better than that.

The switcheroo of Michael actually leaving the day before he announced he was going to was an interesting and surprisingly selfless move on his part, allowing himself to take the opportunity to say goodbye to everyone without making a theatrical production out of it. He says it would have been too sad for him if everyone actually knew it was his last day, though the episode wrings a heck of a lot of emotion out of his secret farewells. It really works from a story standpoint - if the goodbye was a huge production overstuffed with sentiment and honesty it could have easily gotten out of hand, but having Michael just share one last scene with every character, whether it be tearing up a caricature of Kevin as a pig, getting a secret laugh out of Oscar accepting a terrible puppet, or Kelly not even looking up from her phone when he stops by her cube, was an outstanding way to sum up all of his little relationships with each one. I was a bit surprised that his scene with Ryan was so short and gag-based considering how much he loved his self-imposed role as mentor, but most of the others were just right. Getting not-quite-finished, hard-to-clean mittens from Phyllis, acting as a parent for Erin and telling her she can call whenever she needs to, finally giving Dwight his recommendation and a rousing game of paintball, all rang true for the characters and amused while also being remarkably poignant.

Of course Pam and Jim were always his favorite people in the office, and them being the only two to know the truth about him leaving was the obvious choice. The scene between Michael and Jim was great, and even better was his last scene at the airport. I almost thought they were going to let him leave without getting his hug from Pam, but their last scene together was a great recall of previous microphone-less scenes of the past and one last nice moment before Carell leaves for good. His relationship with his team in the past has often been tumultuous, but all season long they've been building to a genuine and emotional departure for what's been the heart of the show since it began, and I think the work paid off. I might not have envisioned this episode a few years ago, but today, I'd say it worked. I did have a couple small issues with this episode, but if it didn't earn the score I gave it, then I'm not sure that a normal TV show ever could.

It's odd, it seems like we've been waiting for Steve Carell's final episode for an interminable amount of time, and now that it's come, it's like it happened too soon. Now that he's gone, it looks like the show's going to be relying on a parade of special guest stars to keep people watching until the end of the season, and I don't really know how that's going to work out. As far as actual content story-wise goes, the only thing the show really has going is the ongoing relationship turmoil around Erin. Gabe's reaction to getting dumped at the Dundies was pretty enjoyable, especially his delivery of "Walk away, bitch." What goes on there could be interesting, and will probably be a big piece of the last three episodes, along with the search for the new boss. As far as season eight goes, I have no idea. I guess we'll see where we are in a few weeks.