If you’re a woman over the age of 30, he drives you wild. If you’re a woman under the age of 30, he still drives you wild — but in an awkward sexy dad sort of way. If you’re a man, you’ve thought about sneaking up on him with a tupperware container in hopes of capturing the “cool” leaking from his pores. He is George Clooney, and his most recent film, The American, was tops at the box office this past weekend. As such, here is my list of the magnetic actor’s top 10 roles.

Already we’ve arrived at our first collaboration between Clooney and director Steven Soderbergh. This remake of the 1972 Russian film of the same name was not as well received as the original (surprise), but it really marked the beginning of Clooney’s foray into more dramatic territory. He was nominated for a Saturn Award for Best Actor from the Academy of Science Fiction, Fantasy & Horror Films for his performances as Kelvin, a psychiatrist summoned to a space station orbiting the titular planet where those on board are seeing dead loved ones. Clooney was not known for doing understated roles and Solaris helped showcase his dramatic flexibility.

Other than Soderbergh, Clooney has enjoyed collaborations with the Coen brothers. For Intolerable Cruelty, Clooney re-teamed with the brothers in this romantic comedy about a gold digger played by Catherine Zeta-Jones who goes after a Beverly Hills lawyer (Clooney) in hopes of marriage and nice divorce settlement. Sure, Clooney and Coen have both picked better premises, but for Clooney, this film embodies his ability to work his slick looks and charm. Some have gone as far as to compare Clooney with the seemingly ageless Cary Grant (not a visual stretch by any means, however) as the film is akin to classic ’30s/’40s comedies.

Nowadays, could you ever see George Clooney working with Quentin Tarantino and Robert Rodriguez? That’s how far Clooney has come in a short 15 years, not that “Dusk” isn’t a cult classic as it most certainly is, but vampires, Robert Rodriguez and George Clooney would never all happen again in present times, especially given what the vampire genre looks like today. Clooney and Tarantino play brothers Seth and Richie, crooks who find themselves in a battle with vampires after their kidnapping of a family goes, needless to say, awry. This was Clooney’s first major role and Tarantino was a hot name to have attached to your film back in the mid-’90s. Clooney finally had a chance to work the cool and witty side that he’s made a name for himself on.

The first collaboration between Clooney and Soderbergh teamed our king of suave with none other than Jennifer Lopez in one of the few roles she’s been praised for. Much like “Dusk,” Clooney plays a criminal that you can’t help but like. While breaking out of prison, he ends up capturing a U.S. marshal (Lopez) and despite the problems that causes, sparks still manage to fly. Basically, Clooney keeps working the sexy all the way to the big time, covering up his Batman & Robin misfire in 1997.

Just when he was riding the typical cannon of mainstream success, Clooney made the daring choice to star in the Coen brothers’ twist on Homer’s Odyssey set in the deep south and it earned him a Golden Globe for Best Actor in a Comedy/Musical. Clooney demonstrated he could handle slightly obscure material and a whole other realm of humor. There’s not much charm in the role of Everett, but Clooney pulls it off, exposing his more animated side, the side that’s turned him into one of the most respected actors working today.

Speaking of comical roles in Coen brothers’ films, it’s hard to say whether Clooney was better as Everett or the neurotic and sex-obsessed Harry Pfarrer in this wacky and under-appreciated comedy. As far as comedic chops, Clooney hasn’t been better, in my opinion. His character is all over the place, obsessing about the quality of various flooring throughout the film and spending countless hours on a “contraption” in the basement. 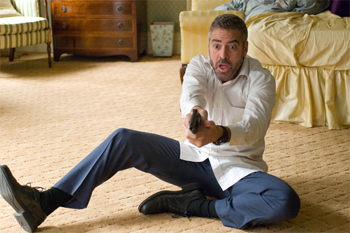 Although I would commend the supporting roles of this film first, Clooney definitely made some noise in this otherwise quiet film as Clayton, the “fixer” for a major law firm. The role hinges on Clooney’s inherent likability as he’s got a big reputation for doing very “off-the-record” work, but it takes the typical Clooney role and turns into something much more understated, that is until the climactic exchange between his character and Tilda Swinton, where what makes him a good actor comes through even more clearly than usual.

If we played word association movie roles (sounds thrilling, doesn’t it?) and I gave you George Clooney, you’d probably say Ocean’s Eleven. Clooney’s career is embodied by this character once portrayed by Frank Sinatra. He’s a criminal, he’s funny, he’s charming and he’s concerned with love (or becomes concerned with it over time) — that’s pretty much all of Clooney’s roles in one way or another. Maybe it’s not his best character, but as far as what Clooney will be remembered for, this is the top as far as mainstream Hollywood movies go. 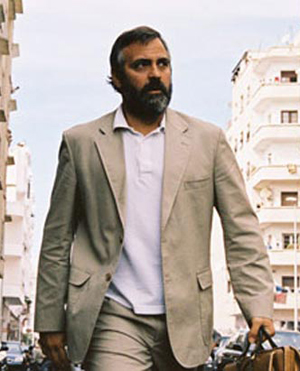 The film that got Clooney his Oscar deserves to be this high although I have to confess this film has been sitting at the top of my Netflix instant queue for longer than I care to admit. Clooney plays a mysterious CIA operative in Stephen Gaghan’s enigmatic political thriller surrounding the oil industry in the Middle East.

In the ultimate story of “no one can do it alone,” Jason Reitman takes advantage of all the coolness that George Clooney possesses in raw form by making his audience believe they want to free-wheel like Ryan Bingham. Then he pulls out the rug. Bingham is the suave and maybe a bit smarmy bachelor that much of the public perceives Clooney to be. He has a neat little speech about how others way down our success and slowly learns he hasn’t got it quite right. Clooney has never been more believable because the character is basically written to be everything we see George Clooney as. Only Clooney in this role learning a valuable personal lesson could truly convince us that the solo life isn’t all that cracked up to be — because Clooney basically represents that in Hollywood. The Oscar nomination was warranted because the performance feels real. Sure, there’s a bit of melodrama and we’ve seen this character arch before, but only Clooney could pull it off this way.