The traditional, operatic western was a staple of early all the way back to the pre-1920s Silent Era. Characterized by heroic frontiersman, Native American enemies and vile outlaws, this genre launched any number of careers for actors and filmmakers alike and truly helped the modern film industry to where it is today. “Spaghetti,” “weird” and “science fiction” subgenres, to name a few, have broken off from its pioneering brand and placed those traditional styles and themes in modern, more morally complex settings.

These many subgenres are somewhat ambiguous and often the lines are blurred as to which group a film actually falls, but for the purpose of this compilation, we will look at those films not falling into the classical category. In honor of the release of The Warrior’s Way, a martial arts/old west hybrid, Player Affinity will take a look at ten of the most daring, unique and divergent revisionist westerns of the last twenty years.

10. Back to the Future Part III

The most maligned of the beloved trilogy starring the spunky time-travelling kid Marty McFly, this third instalment sends Michael J. Fox’s beloved character and the eccentric “Doc” Brown back to the old west. To save Doc who is living a happy life in 1885, Marty must confront the ruthless Buford “Mad Dog” Tannen who harbours some ill will towards the brilliant scientist, which leads to the inevitable showdown at high noon. About as light-hearted a western as you’ve likely to find, “Part III” pokes at its roots with a wink and a nod while throwing modern elements quite literally back in time. 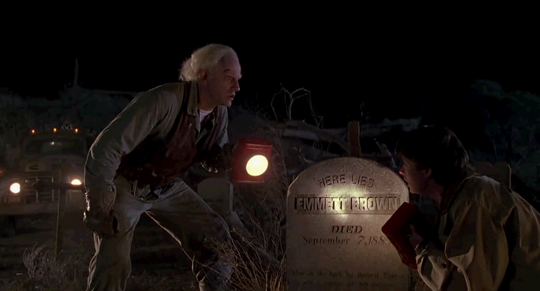 9. The Quick and the Dead

A heavily flawed but infinitely stylish entry, Sam Raimi’s Spaghetti Western homage finds a lady gunslinger riding into the aptly named town of  to seek retribution for her father’s death. What squarely places this film in the revisionist school is its portrayal of a strong female protagonist; a creative choice you would never find in the John Wayne days. Raimi’s campy flair also makes this a heavily divergent effort, with “invincible” Sioux gunfighters and constant marksmanship that would make bulletproof vests a useless option. Wild West indeed.

Landing only in the number eight spot only for its close-to-the-nose resemblance to the classic western style, Unforgiven reinvigorated the entire genre in 1992 and nabbed a best picture Oscar for Clint Eastwood; an idol of the showdown, spur jangling persuasion. Though boasting traditional veins, Unforgiven easily slips into the revisionist sub-genre with its anti-heroism, themes of corruption and barely a hint of melodramatic romance. “Deserve got’s nothing to do with it”, growls Eastwood’s Bill Munny in the film. But in the case of this list it more than deserves some recognition.

Certainly more towards the “weird west” camp, these two Jackie Chan/Owen Wilson action comedies are both a clash of East and West as well as a sometimes satirical look at its converging genres. “Noon” is certainly more a western than “Knights” if in setting only, and what makes this the unique entry it is, is certainly the physical comedy and martial arts skills of Chan. He works well with the deadpan humour of and in many ways, these two films are buddy flicks, another theme you will not find in the classical western.

Though I have a bone to pick with this film, so to speak, in that its half-and-half horror/men-on-the-run approach robs us of what I truly believe could have been an amazing film if the first half had continued, From Dusk ‘Till Dawn is a Western through and through and most certainly not the kind Sergio Leone had in mind.  This is a root ‘em toot ‘em gory, wildly divergent western (with vampires) that explores themes present in a great number of Robert Rodriguez’s films as well as in that of this frequent collaborator and co-director Quentin Tarantino. The director has expressed in the past his appreciation for the genre, and his take on it is a welcome change of pace from the normal available product.

Even though never experienced the “western frontier” as defines it, that didn’t stop them from making one of the great modern Westerns and along with it, a sensational performance from the frequently underrated Guy Pearce. The Proposition heaps on the grit and does align itself with the classic themes with regards to the depiction of natives and the revenge themes are decidedly modern. The gunfire is brutal and piercing here; you won’t find any “pings” and “whizzes” just deafening thuds and flying shrapnel. This is likely closer to what the old west was like; brutal, savage and desperate.

4. No Country for Old Men

The Coen brothers have always been suckers for Westerns, but only a few of their films don’t embrace or echo some element of the genre. No Country for Old Men is one of the purest instances of a revisionist, contemporary Western. From its setting to its lone hero vying for a “treasure,” “Old Men” extracts any number of themes and drops them squarely into the 21st Century. Like a number of entries on this list, this Coen brothers' production is gritty, bleak and examines the complexities of morality and violence. The directing duo uses Western themes in a number of its films, so it was not a surprising development when the two announced their intent to remake True Grit.

Easily the most gleefully embracive of its divergent roots, this Korean export sets its take on the Western in turn-of-the-century and follows a thief, a gunsliging bounty hunter and a ruthless hitman as they quest for buried treasure. This offering also takes elements from the “weird west” subgenre with even a hint of steampunk. A clear, loving homage to Sergio Leone's The Good, the Bad and the Ugly, this entry does not only blend genres but also exists as one of the flat-out best action movies in recent memory. The concluding act also features one of the great all-time Mexican standoffs and instantly cemented itself into the upper class of its genre.

2. El Mariachi/Desperado/Once Upon a Time in

I don’t want to seem like a cheat for placing the same director on this list more than once, but you’ve got to hand it to Robert Rodriguez, the man deserves his place. With even the titles screaming “Western,” his unofficial trilogy features Mexican standoffs and duels and right down to the setting, Rodriguez blends those ideas with his usual stylish, over-the-top action tropes which have become his mantra. There is more than a hint of Leone’s “Dollars” trilogy here, toss in some sultry female heroines in the form of Selma Hayek and Eva Mendes and you have a pulp Western series for the modern era.

For the legions of still-pissed Firefly fans wanting anyone’s head who as much looks the wrong way at Joss Whedon’s prematurely cancelled space saga, it is easy to see and to overlook the heaps of Western themes present in the original series and its movie spinoff, Serenity. Any space cowboy who still draws from the hip and talks in broken old-timey English is a good ol’ fashion cowpoke in my book, and Nathan Fillion’s Caption Malcolm Reynolds sells every inch of it. Truly, the only difference from this film and a classic Western is the time period. Were you to switch outer space for a dusty plain, you would barely have to change any of the details (well perhaps the Reavers). In fact, in Firefly the crew lands on some outer-rim planets that are a scene right from High Noon. So for its bold consolidation of science fiction and the classic Western, Serenity rides off into the sunset with the number one slot.