Sometimes, it’s all about the chemistry between actors. With the upcoming release of The Tourist, audiences will find stars Angelina Jolie and Johnny Depp on screen together for the first time. Early reviews note how the film draws well on their combined star power, leading us at Player Affinity to ponder what other movies are remembered more for their lead stars’ performances/dynamic over the film itself. 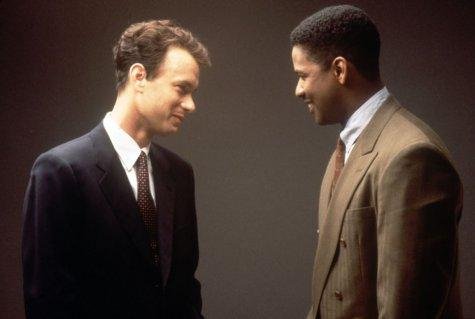 Coming out in 1993 and focusing on the AIDS epidemic of the '80s, Philadelphia was a gamble/risk against the rising careers of Tom Hanks and Denzel Washington. Due to it’s subject matter, the two leads could have taken the easy way out, relying on the anti-discrimination message of the story to carry their performances through, playing to the emotions of the audience. Instead, Hanks and Washington, two men who couldn’t be more different from one another, develop their individual performances with authenticity and soul. Hanks would win an Oscar as a dying-lawyer-turned-plaintiff in an AIDS discrimination case while Washington bolstered his resume playing his once homophobic rival turned lawyer/friend. Theirs is a relationship not built on a great sense of history but human decency and it is all credited to the chops of Hanks and Washington.

The 2001 remake of the Rat Pack’s caper film Ocean’s Eleven had a lot going for it in terms of star power with a cast that included Matt Damon, Julia Roberts, Andy Garcia and Don Cheadle. In fact, it might have had too much talent running around. However, it all balanced out with George Clooney as mastermind Danny Ocean and Brad Pitt as his best friend/second in command Rusty Ryan. With both actors entering the next stages of the career, they became the new Duo of Cool with their quiet banter and offhand humor (much of which felt improvised). Having never worked with one another prior to “Eleven,” now you’d be hard pressed to find them far from one another. Given how comfortable they appear around each other, that’s not a bad thing.

One of the appealing things about great film duos is how opposite they can be from one another. The 1967 film based on real life lovers/bank robbers Bonnie Parker and Clyde Barrow (played by Dunaway and Beatty, respectively) plays off this concept of opposites but ends it in a dramatically different manner. With Dunaway’s elusive beauty and Beatty’s side of the road charm, audiences reacted well to their chemistry and both ended up winning acting Oscars for their performances. They rob together, they love together and they die together in one of cinema’s most memorable (and violent) endings. They may have met a violent end, but Beatty and Dunaway provided one of cinema’s legendary couples who, for better or worse, developed into a single character, where one could not associate one without the other by the film’s end.

Speaking of extreme opposites, before Black Swan had Natalie Portman descending into a dark identity crisis, Brad Pitt’s Tyler Durden was dragging Edward Norton’s nameless Narrator down a dark, violent and awesomely twisted road. Inciting Norton to break his routines and rules, challenging his very identity (*cough*), Pitt’s Durden was as impactful as his many punches thrown. Norton, much like the viewer, scrambles to keep up while holding tight to his sanity (let alone actions) and the end result is one of cinema’s better mindfraks to come along in some time: one only made possible by two actors in the midst of their primes.

Humphrey Bogart was, and to many still is, the King of Cool in the cinema world, known best for his noir roles. Katherine Hepburn was already a renowned actress, way ahead of her time both on and off screen and sought after for her quick wit and delivery. Bringing them together for 1951’s The African Queen brought two powerhouses together for the first and only time. The finished product would result in several Oscar nominations including Best Actress for Hepburn and Best Actor for Bogart; Bogart going on to win his first and only Oscar. Their pairing may sound like standard fare when it comes to opposites attracting (inevitably falling for one another) under extreme circumstances (the film set during WWI), but in the hands of Bogart and Hepburn, cinema is given one of the more humorous and sincere couplings to come around.

5.) One Flew Over the Cuckoo’s Nest (Jack Nicholson/Louise Fletcher) 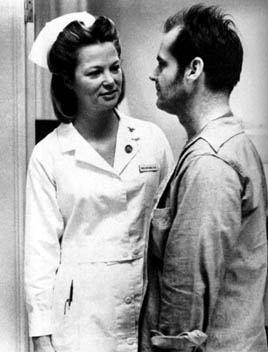 Another two Oscar wins in their respective acting categories, you don’t get more uncomfortable than when Nicholson’s McMurphy and Louise Fletcher’s Nurse Ratched face off. Theirs is a conflict not based in punches and kicks, but practices and ideals. McMurphy is a lover of life, inciting his fellow patients to follow suit with fishing trips, casino nights and sneaking girls into the ward. Ratched seeks obedience, restraint and ultimately control over the identities and ideals of the patients under her care. Nicholson and Fletcher butt heads with just enough force to keep the movie from taking the viewer out of the experience. Their restrained, boiling interactions lead to an explosive encounter with devastating consequences, making the end all the more bittersweet. Phenomenal script, direction and supporting cast aside, this is a film where if you see it for anything, you see it for Nicholson and Fletcher’s group therapy scenes. 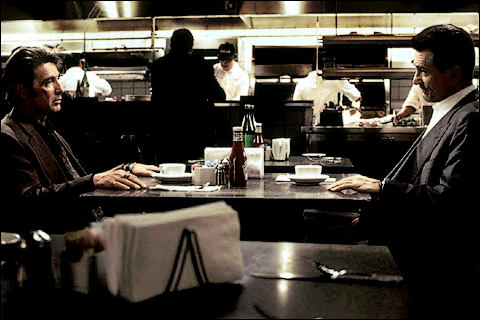 They had built their careers and reputations on grittier roles and had already shared a top billing movie together (Godfather II) without actually crossing paths on film. With Michael Mann’s 1995 Heat, DeNiro and Pacino took the cat and mouse game between a professional thief and an obsessed cop to a new standard. With Mann’s concise direction at their backs (nobody can shoot L.A. quite like him), DeNiro and Pacino crackled at one another, whether or not they were in a scene with one another. DeNiro’s understated, subtle approach to a world weary thief was only matched by Pacino’s, who had been gaining his notoriety for going over the top by this point, “expressive” take on a cop that won’t stop until he gets his man. Many criminal and cop couplings came before Heat and more came after, but there’s no denying this pairing still holds power 15 years later. 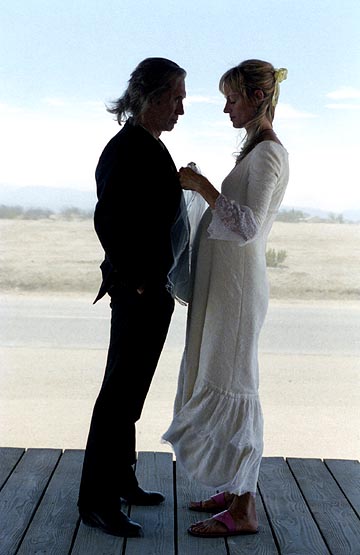 The Bride is coming to kill Bill. It sounds simple enough on paper (it is). However, when brought to life by Thurman and Carradine respectively, it’s so much more. It becomes about revenge, betrayal, history, skill, consequences, family and ultimately love. For the first two hours of Quentin Tarantino’s two-part saga, Thurman has one note to sing (kick major ass) and she sings it well. Carradine is only a fleeting, sly voice placed at just the right points. By the time the vastly underappreciated second half rolls around, Thurman and Carradine are brought together on the front porch of a Texas church house in a brilliant scene that highlights the two’s fantastic chemistry together. Several facets of their dynamic, including fear, humor, pain, love and violence, are on full display in these opening frames alone. It’s fantastic and it’s also one of the best cinema pairings in recent memory.

2.) The Silence of the Lambs (Anthony Hopkins/Jodie Foster) 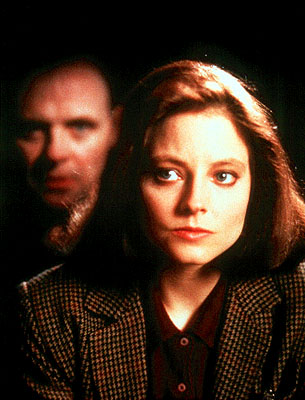 If Heat made it on this list with a cop/criminal angle, there’s no way we’re leaving this pair out. Whether you’ve seen the rest of the 1991 film or not is almost immaterial: what is truly remembered is the relationship between Hannibal Lecter (Anthony Hopkins) and Clarice Starling (Jodie Foster). Hopkins only having around 15 minutes of screen time has no effect on the power of his scenes with Foster. One wants advancement and to catch a killer. The other wants to pick her brain (literally and figuratively). Foster hits the nail on the head masking the shame and pain of her past while Hopkins jabs her with such precision and horror as to eclipse any other aspect of the film. Like any (and most) great duos, they serve as extremes of one another. Given how both Hopkins and Foster swept their respective categories during Oscar season and the movie made millions worldwide, spawning two sequels, it’s safe to say critics and audiences agreed.

Rocks in his throat or not, Christian Bale has been widely praised for balancing the dual personalities of Bruce Wayne/Batman successfully in 2005’s Batman Begins. With The Dark Knight, Christopher Nolan faced enormous expectations in casting Batman’s longtime nemesis, The Joker. Eyes were raised when Heath Ledger (hot off his successful awards run with Brokeback Mountain) got the part, especially since Ledger had little experience in anticipated, massive projects with such an iconic character. In regards to the end result, Ledger’s Joker sums it up appropriately: “this is what happens when an unstoppable force meets an immovable object.” There’s no denying that Bale and Ledger were downright electric when they shared a scene. Within the film’s runtime, such a history feels at work between the two’s performances. Sadly, with Ledger’s passing, we will not see that history grow, but we will remember the powerhouse pair at the center of The Dark Knight for a long time to come.

What duos do you have for us?