If anyone was wondering whether or not The Phantom Stranger would continue on with it’s streak of being a thoroughly engaging read or backslide into mediocrity even with DeMatteis then all those fears have been put to with The Phantom Stranger #10. Not only does it cement itself as the single most perfectly structured issue of the issue thus far, but it also leaves every other issue miles behind in the dust.

This entire latest story arc has been a large-scale riff of Dante’s Divine Comedy, of which something similar was done during DeMatteis’ run on The Spectre, but with The Phantom Stranger in place of Dante. The very conceit of this in itself is enticing – the journey from Hell into Heaven taken by one of the greatest sinners known to man. While also dangerously precarious in terms that such a storyline would need deft and skill to pull off convincingly. It veers on the edge of being worthy of a simple rolling of the eyes if done incorrectly. Luckily enough “skill” is exactly what DeMatteis is able to provide, but also tinged with the touches of inner feelings.

At the corner stone of all this is the fact that DeMatteis has focused solely upon developing the Stranger from outside observer, which is something that even Didio faield to do, into a fully flesh out character. A character with hopes, dreams, personality, and even desires. With this secured then the story has actual emotional resonance because now the reader knows what the character is going through. In this they can finally relate to and emphasize with them. The Stranger’s frantic quest for his family has indeed been one of the most emotionally thorough roller coasters that I’ve witnessed in the DCU for a long time. 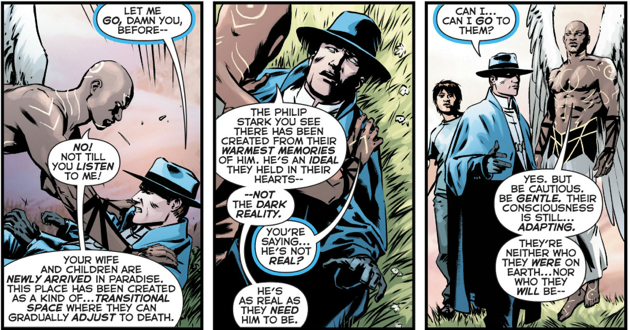 DeMatteis’ script include palpable tensions as The Stranger strives forward though what for others are “Paradise” but for him is the sole reminder of his greatest failures. His only thoughts are on the subject of his family and at the crux – the ultimatum handed down from God: that he can only choose to save one soul from death. It’s something that haunts The Stranger throughout the issue as his own personal “Virgil”, Zauriel from Grant Morrison’s JLA run, to their final destination, guides him. And for once – it’s believable.

The family that The Stranger as acquired, that he actually loves, are now so tied down to him – so clearly tethered – that they become less of side characters and more like the ultimate end goal. "The Ultimate Boon", to put it in terms of the Hero’s Journey. And that is where DeMatteis is able to pull off his emotional coup de grâce. While this takes its notes from The Divine Comedy, it is a tale that could have only ended in tragedy. A conclusion that, while heart-wrenching, also pulls double duty as a satisfying finale to this era of The Stranger’s life. The family is gone, but their send-off was sublime, and what else can side characters hope for?

There is no need to say that this is DeMatteis at the complete top of his game, this story perhaps even cracking near his best. It’s the perfect example of how good writing is enough to salvage any series – but great writing is enough to make it memorable. The art by Fernando Blanco is similarly on point – though not as perfectly primed for the series as Gene Ha, it still compliments DeMatteis’ writing excruciatingly well. This series will have to whether through whatever the upcoming Trinity War will have in store for it – and should it not survive long past that it was worth it to have this brief look at Paradise via DeMatteis and Blanco.