The Phantom Stranger has, by far, become one of my favorite series that is being put out by DC Comics as of now. Which is why I was no less tense when it was announced that it would be having a “Trinity War” focused tie-in this month, as that is one event that I am forming little esteem for.

What occurred, however, was the production of the best “Trinity War” issue so far, main issue or tie-in otherwise. It is able to take the one plot aspect of the main “Trinity War” story and craft a self-contained story that fits very well into it’s own inner narrative. It is pretty much able to do what very few tie-ins are able to do: put out an issue that will be able to be read along with the others without large knowledge of the story that it ties into. Tie-ins in themselves can be very messy, confusing, and out of place. The Phantom Stranger #11 carries forth the characterization and main themes forward that have been culminating since the beginning of J.M. DeMatteis’ solo run on the title.

The issue follows The Stranger and his team of Katana, Batman, and Deadman, who travel into the afterlife to save the soul of Doctor Light. As one knows from the latest issues of the series The Stranger has only risked this same action moments before – in a desperate bid to save his family. The meditation that the writing provides on that and on why he decides to gamble it all once again is superb. While not as overtly mining as to the inner character of the Stranger as the other issues, it’s the subtle play by play which leads to his decisions in this issue that display new and re-discovered motives and emotions. The Stranger relates to Doctor Light and his plight with his family, and in this leads to some very hefty set-pieces in his return to the afterlife.

Speaking of set-pieces this is not to forget the companions that The Stranger has brought along on this journey, not in the least. The very fact that they are traveling into the afterlife, which is basically Heaven for all intents and purposes, allows for a very rare situation to allow for very natural – if blatant – character showcases and slight development. The conceit is that the whole gambit of the afterlife is in its nature as lotus plant trap for those who are not among the dead – capturing them in snares of their own personal heavens. With this we are allowed some insight into the likes of Katana and her whole quest for vengeance, a nice retread of what Batman is fighting for, and the goofball antics of the Deadman. It’s really simple and understated use of what could have been bland and obstructive “guest characters’ that were forced in as part of the similarly bland event.

While the issue serves, by itself, as a characterization coup d’etat for The Stranger, as it perhaps ends off closing up one very large beat in his character, and as nice little sound bites for the supporting cast – I think it is very nice to give some appreciation for the art. Fernando Blanco is perhaps the only other out of two artists that have been able to capture the raw essence of this series. The well defined; yet incredible soft, look of his pencils coupled with few, but ingenious, crafting of the panels – it’s a delight to look along with his work. Especially in the afterlife sequences which are only sold and convincing through Blanco’s portrayal. To undersell his contribution to the series would be doing the title a grand disservice, and that is something that should never be done. 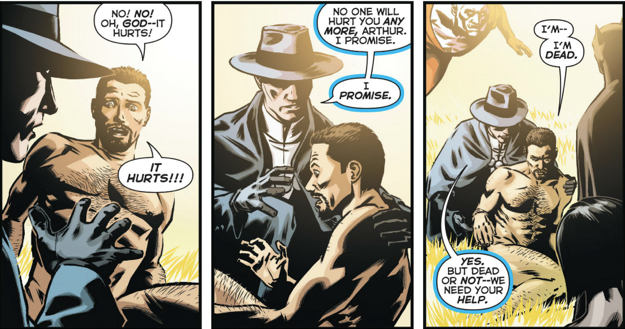 Especially with a book as consistent as this. I hope it survives past this event since DeMatteis has been doing wonders with this series. While this issue might be setting up for a finale, given the high take on redemption within it, it will be a very fitting conclusion. If only all the other issues of “Trinity War” could be as good. Thankfully it is already halfway over.