With the first wave of Forever Evil tie-ins having been released there was none more anticipated than what has become one of DC’s biggest sleeper hits – The Phantom Stranger. With the big cliffhanger ending that capped off the last issue – and served as the midpoint for “Trinity War” – this was one of the few conclusions that readers have been eager to get their hands on.

One of the highlights of this issue, which is really characteristic of the series as a whole since J.M. DeMatteis was brought on board, is that it takes the whole notion of being a tie-in as a secondary priority. Rather than layout and reiterate many of the plot beats that have already been stated within Forever Evil and in “Villains Month”, The Phantom Stranger takes a different route. It sticks to it’s own narrative first, barely even pausing to mention the various levels of destruction. DC has already announced that the title will be a part of the larger Forever Evil story, but this method is much better for the current situation.

Tie-ins that are either like this, or those that actually serve a narrative purpose within the event, are the ones that are actually worth the banner of being a tie-in. It’s the best of two worlds, and DeMatteis brings us deeper into the personal world of The Phantom Stranger. While taking cues from what Didio was able to bring to the table before him DeMatteis has been doing an astounding amount of mythology and world building within the series – from new villains, characters, and general dynamics and interactions. All three get some new emphasis and depth in this issue – with the long anticipated return of newly minted archenemy of The Stranger, “The Sin Eater”. For such a goofily introduced and conceived character, The Sin Eater has become an intimidating and even frightening force for the series. 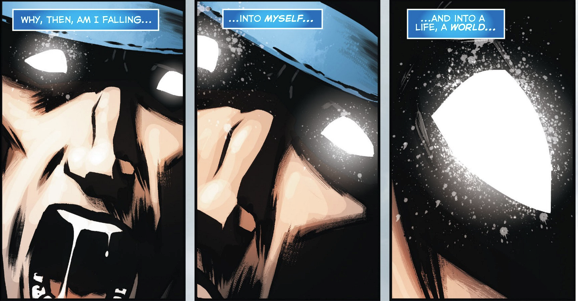 The biggest surprise the issue had to offer was the elevation of a one-note character, the barely named and characterized Christopher Esperanza, into a major ally and part of the overall supporting cast. It’s a bold, quite left field, move but it’s one that makes a lot of internal sense. More than that – DeMatteis is able to bring all of this in, and with an actual sense of importance, in a very enjoyable and emotional way. Christopher is able to become a force in his own way in just the couple of pages allotted to him and if that’s not a sign of skill and good construction I am not sure what is. Another masterstroke of character work was the reintroduction of Terrence Thirteen, who we last saw in the stroke of depression, and who gets both a shot at redemption and also more information on his family. For Thirteen fans out there they’ll be happy to see signs of Tracy hinted at.

There is hardly a moment where DeMatteis is off form here, and he is still hitting all marks with this series – and hopefully continues this sort of quality once “Forever Evil: Blight” hits stands. As for the art side – there is not much to say, other than Fernando Blanco is seriously bringing it. Even though for a while I believed that none could compare to Gene Ha when talking about work on this book – Blanco has proved me inordinately wrong. His work ranges from the creative, to the simplistic; from the ordered, to the incredibly chaotic – and never fails to create a lasting tone and impression on the reader. It’s one of those perfect matches of style and content that one so rarely sees in mainstream “Big Two” comics these days. With event after event bringing attention to this series what seemed to be dead in the water now has become a series with some tangible staying power. 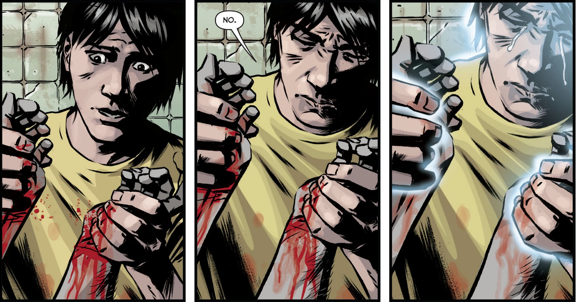