The Phantom Stranger, at long last, finally has been given a second chance. No, I don’t mean the actual guilt-ridden titular character, but the title itself. For the last six issues of this "New 52" run of the character it has been written by the out of his depth Dan Didio – who has, admittedly, written a few good/solid moments but overall has produced a very weak and uninspired take on the concepts that it has produced. Concepts that under a stronger hand would actually make for some interesting reading. When veteran writer J.M. DeMatteis was announced to be joining Didio on writing duties (first on touch-ups and then on real co-writing) people have believed that he would bring forth the potential that the series inherently had. So with the release of The Phantom Stranger #6 the time has come to see – did DeMatteis deliver or not?

Well, it might not have been the very stark improvement that some might have been hoping for but at the very least DeMatteis makes a valiant and very clear effort to do so. With this latest issue there is a sincere jump in quality all around, and not just within the confines of the writing – but more on that later. Now what allows for this spike of improvement is how the issue distinctly separates itself from the Didio-only issues while still building up from them and not wholly disregarding them. In fact it feels as though DeMatteis should have been first pick for the series in the first place, that way instead of getting the sparsely entertaining but mainly "riffable" Didio writing, it might actually be someplace by now instead of just beginning.

Now what sets it apart from the Didio issues is the basic approach that the two take to the series, which might not seem apparent at first but really does mean a lot. The early issues and the Didio solo run in general focuses mainly on other DC Universe characters instead of the titular character. It cared more about developing concepts and events that would later be carried into different books (ie. Raven into Teen Titans) and worried too much about building up stuff that had nothing to do with The Phantom Stranger whatsoever. In fact, the more entertaining parts of his run were segments where outside characters basically stated how ridiculous the events going on were – such as the All-Star Western version of Dr. Thirteen or the “Dog God” (an original character within the series). 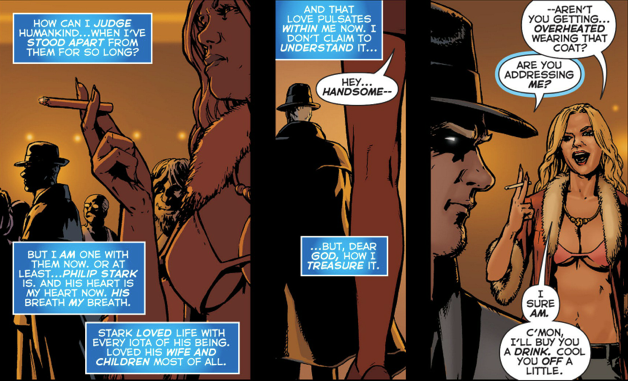 DeMatteis, on the other hand, goes in what is really the most opposite direction. What DeMatteis does, and it can be very likely attributed to him because the same mannerisms appearing in his run on The Spectre (the run with Hal Jordan no less), is that he focuses in the very introspective aspects of the character. He spends a sizable amount of this issue giving the Phantom Stranger new, or rather untapped, depth is several key areas – especially those regarding what exactly his ties to his family are, and to how he feels about having a “secret identity” and the duality that goes with that. It serves as a sort of testemant that even though the narration boxes that made the Zero Month issue such a hassle are back to their same quantity – they are used with much better effect and read better too.

Other than that the issue also showcases actual intrigue and tension – which is a given since it focuses solely on what is described as a “metaphysical poker game”. It’s an interesting concept pulled off with some applaud, a first for the series in general. Another sorely missed, though admittedly slightly touched upon aspect, is the building up of the series’ own internal mythology. It has begun to play around with developing it’s own unique cast that includes “The Sons of Trigon” and the present day incarnation of Dr. Thirteen. If it can finally begin the trek toward standing on its own then The Phantom Stranger begins to become something special.

Now as for the art it was – as I had mentioned previously – the second jump the series had in quality. Rather than be by the serviceable Brent Anderson it was instead done by the personal favorite that is Gene Ha. Now Ha’s darkly ink-ridden style fits with the series to such a degree it is a small pleasure to know that he will also be doing the next issue’s art as well as a few covers. It’s expressive and moody and captures the essence of this incarnation, and rather any incarnation, of The Phantom Stranger. So, while this was a rather good restart for the series it still has the dishonor to be tied to such a big event as Trinity War. DeMatteis seems to be able to maneuver through that so I’d gladly say that if there was any time to read "New 52" Phantom Stranger it would be with this issue.