No video game remake has sparked more controversy among gamers than the rebooted, forthcoming entry into the long running franchise, Devil May Cry. Developer Ninja Theory's stab at the action franchise, now titled simply DmC, has divided gamers everywhere since the 2010 unveiling at Tokyo Game Show. The major change that hinges players between liking and hating this reboot really boils down to the change in Dante's appearance. In Ninja Theory's DmC, the alternate universe version of Dante is young, sporting short black hair, and an even cockier attitude. Now you might be asking “what's this ‘alternate universe’ you speak of?” Well, Ninja Theory has stated that this game takes place in an alternate universe, and is not in the same canon as the previous four entries of the game.

Personally, I'm impartial to the whole thing. My exposure to Devil May Cry is remembering that I enjoyed playing through the original game, skipping two, and dabbling a bit with three and four. I've never considered myself an invested fan of this series, so everything that has been changed here isn't a bother to me. This series always passed me over for series' that I was more passionate about, namely Castlevania, Halo, and Resident Evil. So when DmC was initially announced, I was okay with this new DmC.

Flash forward two years, and I'm finally getting my hands on a fantastic demo for this game. The first thing I noticed about DmC is that from the demo, it is an extremely polished game. The two or three years that Ninja Theory has been developing it has really made this an impressive experience, and I didn't notice anything questionable – no glitches, no pop-ins, nothing. Graphically, the game looks fantastic, as Ninja Theory has seemingly found a way to push the limits of the Playstation 3 and Xbox 360 in the end of their respective console cycles.

The demo kicks off with Dante waking from a hangover. He's contacted by a young woman named Kat. She goes on to tell Dante that the leader of “The Order” needs his help. This group, seen by the general public as a terrorist group, is headed by Vergil. The real mission of their group is to stop the demons, and Vergil also reveals to Dante that he is his twin brother. Through a cutscene explanation, Dante learns that he is Nephillem – the offspring of an angel and a demon. Vergil hopes to recruit Dante into The Order. From there, two levels are available for your enjoyment. The first level is more of a tutorial and, believe me, I was more than willing to accept a tutorial level here. Being that I'm not akin to this sort of game, I needed a good refresher on how to play a good action game. Most everything here came natural, as the last action game I played was 2010's excellent and underrated Bayonetta.

Although the game has its changes, many things from this franchise return, like the return of Dante’s guns (Ebony and Ivory), his sword, and even an axe and a scythe. The action feels top notch too. Since I'm not playing this type of game every day, I was surprised to find myself pulling off some pretty impressive combos in a matter of minutes, and everything here is set up to make the whole combo system very deep. There is a bit more platforming than I remember from the original title, now you have an ability to use a rope-like device to cross platforms, by using a combo of left trigger and ‘X’ while right trigger and ‘X’ is reserved for an attack with this rope.

The game works almost exactly the same as it did back in 2002; you will run between corridor after corridor, having to blast and hack up enemies to proceed to the next area. Doors are still blocked off until you clear an area of enemies, and you still collect a variety of different gems to upgrade Dante. The disappointing part of the demo is that you can't actually upgrade Dante, which is something I would have loved to test out, but it isn't necessary for these two levels. After bouncing around on some moveable platforms, in one incredible sequence, the level then ends. It's a short level, taking about twenty-minutes, but it was enough to give me a taste of what DmC has to offer. 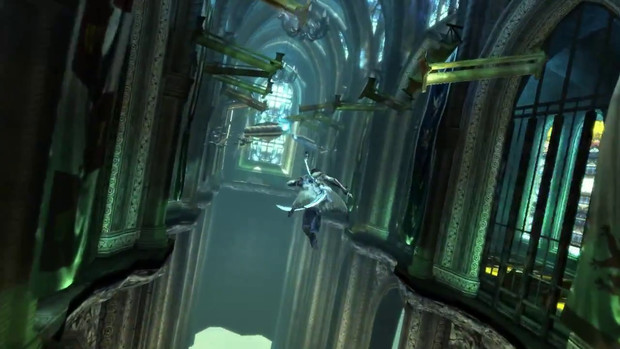 If that isn't enough for you, the DmC demo also includes a boss fight. In this brief battle, you are pitted against a gigantic, larva-looking demon. After some quick dialogue, you jump right into the offensive. I have to admit, I died twice during this battle, but I enjoyed it. After whipping around the area, rather Belmont-esque and battling this creature, the battle ends where I could only imagine is an ending for the demo's sake, as it felt as if the boss battle would be going on for a bit longer.

At the end of the day, I walked away from DmC extremely impressed. The graphics look fantastic, the sound is top notch, and, more importantly, the combat and combo system are fully intact here. The final thing I would like to point out is that Dante has never been voiced better. It's interesting to note that Dante has been voiced by a different actor for every iteration of this franchise. While it still may have hardcore fans up in arms, DmC's demo impressed me, and I'm even more excited for the January 15th release. Do yourself a favor and download the demo on your platform of choice today, and give the new Dante a spin.