Where to begin with this issue? If you thought that Cole Haddon was going to save it all for the fourth issue then be ready for the best disappointment of your life. This issue just keeps going and reveals more and more to the point where you don’t know when it’s going to stop. I will say that this issue is so good that the bar is set pretty high for the fourth issue, which means this one could end up being the best of the series.

We’re treated to only one flashback in this issue, but the importance of the flashbacks is revealed by the end of the book. After the flashback we find Tom in Whitecapel in bed with the whore that helped him out in the previous issue. He confesses his guilt about convicting an innocent man and that he knew he wasn’t the Ripper the minute he saw him. It’s a strange moment that could definitely have been more moving had their relationship been built upon more before this issue. 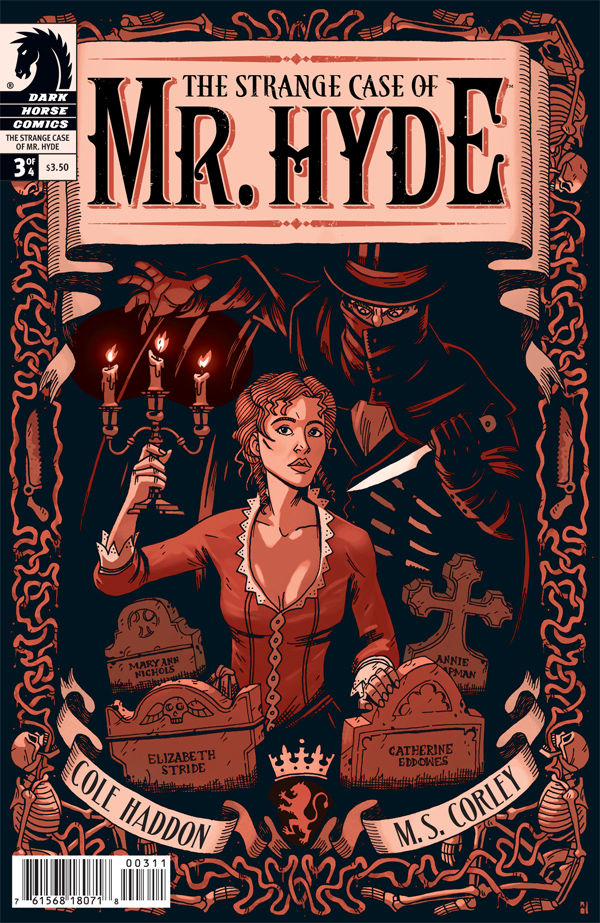 Later Tom is at the police station where he receives another Ripper letter. This one includes an invitation to a high society party and is bait for Tom and Hyde to try and stop the Ripper. Tom gets Hyde out of the clink once again and the dressed for the party. Tom is taken back as the people he looks up to and respects are basically taking part in a Roman-esc party filled with drugs and sex. After a while Tom figures out that they’re only there to be distracted as the Ripper kills again.

The Ripper is in fact killing again, but is interrupted forcing him to leave. Tom and Hyde are quick on the scene and deduce that the Ripper will strike again that same evening. Allowing Hyde to get juiced up again, Tom takes to a balloon ride as Hyde runs the roofs hot on the scent of the Ripper. They discover him and Hyde engages in fist-a-cuffs with him, only to have his ass handed to him and leaving Tom to save him.

That’s the end of act two if you can believe it. The story goes on from there, but we’re deep in spoiler territory so I don’t want to ruin if for you. The last issue got a 9.9 out of 10 and I have to be honest there were a few hiccups in this issue, but I think that it does so much right that it’s going to hit the 10 mark. This issue nearly overloads the reader with reveals, but begins tying up all the story points nicely so that it can have a clean ending. It’s such a good read that I found myself really wanting to read it again shortly after finishing it. There’s nothing new to say about the writing or the art other than it continues to be top notch. If you missed out on this series then you are really missing out on this series. I’d recommend picking it up from Dark Horse’s digital app or web store and getting caught up before reading this issue, but make sure you buy this book since it’s the best in the series thus far.