The strangers meet by “coincidence” convention

Hollywood can find a thousand ways to tell the same story. For starters, there's boy meets girl, boy loses girl, boy jumps through every hoop to get girl back. Think of how many movies rely on this simple outline yet veer off in a myriad ways. Some plots are so over utilized there are predictable clichés film enthusiasts expect and immortalize in satire. Others are a tad trickier to pull off, and are therefore far less popular.

Such is the case with stories that follow strangers brought together by seeming happenstance. I say seeming because there simply are no coincidences in these particular films. The meetings of people who insist they are unrelated means the most integral aspect of all action in the film will hinge on the revelation of their intricate connection. The trick is for the audience to realize the association at the point the writer intends and not a moment before.

The blogosphere is abuzz with predictions of the link between five strangers trapped on a fateful elevator in Devil. The psychological thriller makes conspicuous notes in its advertising that these few people have been brought together for a purpose; their “chance” meeting will be central to all points of the story. “The mind of M. Night Shyamalan” will either bring a hit or a miss, as the success of this convention varies widely.

The “Saw” series has made $370 million domestic and has become the highest-grossing horror franchise using the "strangers" plot design in the majority of its entries. The connection between the characters is Jigsaw, the ailing mastermind behind the horrific traps his victims must escape. In each "Saw" film the characters must distinguish their connection. In Saw 2, each person was a convict busted by the same cop.

Final Destination 2 used the device quickly and strategically. A massive car accident sends groups of strangers on a collision course with death. The strangers in the first sequel bridged themselves to the friends in the original when they realized they all avoided dying due to the deaths of the original movie’s victims. This was quickly introduced and forgotten, however later films in the horror franchise failed to create any connection between sequels.

Horror is not the only genre to benefit. This convention also works well in thrillers. In Identity a group of strangers mysteriously find themselves at a deserted motel. They barely realize they share the same birthday when someone begins killing them off. The race is to find who the killer is and why, with relatively few clues. That movie was a decent success with critics and fans, however similar attempts have swung and missed. 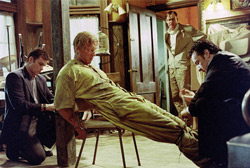 In Unknown, a random group of men wake up in a warehouse with no knowledge of who they are or how they ended up in chains. These are some bad men, but they don’t have any recollection. The clever aspect in the twist is how evil becomes good and good evil with neither the audience nor the characters suspecting. Still, the little film never made it past six theaters and $26,000 domestic.

The Usual Suspects proves this tool can both sink a movie and garner an Academy Award. At the outset of the movie five unacquainted criminals are brought in for a police lineup. They vaguely know of each other, but decide while in custody to pull off a heist. The ending gives plot twists a good name and the well-designed story won an Oscar for Best Screenplay. By using the convention in a more dramatic film, greater emphasis was placed on the characters, their pasts and futures.

In the case of Devil,a lesser form of that key ingredient is present, the use of personality archetypes. This is the stuff spoof movies are made of. These poorly drawn characters pop up in motion pictures far too much. In an effort to rush into the action of the film, characters are given wholly one-dimensional personalities that inspire gut reactions in audience members. There is always a jerk everyone knows will eat it by the end of the movie and a goodie two-shoes that will make it out fairly unscathed.

A more popular twist on this simple outline is the intertwining storyline seen in movies like Crash, Seven Pounds, Babel or most recently, Brooklyn’s Finest. In these types, multiple storylines are followed with seeming distinction until the climax or falling action where all subplots converge into a single journey. Then if we jump over to the small screen, we have the ultimate example of this and all the others in Lost. But these examinations are for another time. Entrap yourself with the titular prince of darkness and his five unwitting victims when Devil premiers in theaters tomorrow.