The Top 10 Alien Worlds in Film

When Hal Jordan makes his big screen debut this Friday in Green Lantern, his story will not only make him a superhero, it'll take him out of this world. Literally. As a newly inducted Green Lantern, he must travel to the world of Oa to learn how to harness his powers before Earth is destroyed. With this new setting in mind, Player Affinity takes a moment to reflect on the films that took us off our little blue planet and exchanged it for some of the most memorable planets depicted on the big screen. 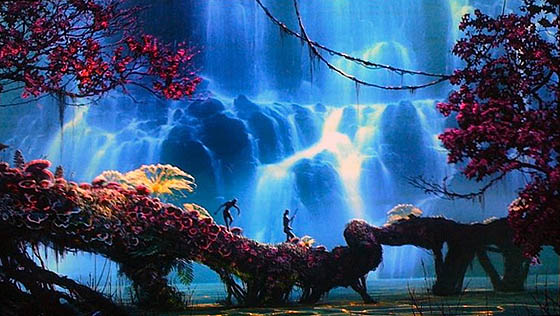 Say what you want about the script of Avatar—and I’ve said plenty—but you cannot deny that the world in which it takes place on is a stunner. As vibrant as it is massive, Pandora is an environmentalist love letter come to life on film. The native Navi are able to “tap” into their surrounding environments, accessing memories of sight and sound like a computer, form physical bonds (head out of the gutter) with the wildlife and believe in the cyclical nature of life on Pandora. The planet repays this by assisting our heroes in the climactic fight, where droves of wildlife attack the impending military forces, giving the planet a heavy-handed personality of its own. It’s not subtle that Pandora is a metaphor of Earth, asking a big “what if” in regards to humanity’s advancement of technology and the effect it has on our planet. Since most of us don’t plan on “bonding” with any trees, James Cameron, we’ll take your colorful world on film and leave it at that. 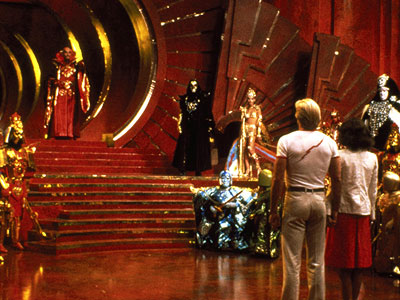 If you don’t know who Flash Gordon is, shame on you, look him up. Sci-fi owes more than a few favors to the plucky football star turned planetary explorer. The most famous of these planets is Mongo, which is ruled by Ming the Merciless. The planet already gets ten points due to its ruler’s awesome name but has plenty of other factors going into it. In fact it seems to have everything! Technologically advanced cultures, less advanced cave dwellers, cities on mountaintops, cities on the ocean floor, cities in the sky...the list goes on and on. Whether you’ve heard of it or not, Mongo has remained a standout planet of the science fiction realm that has spanned across comics, radio, TV and film for over 80 years. 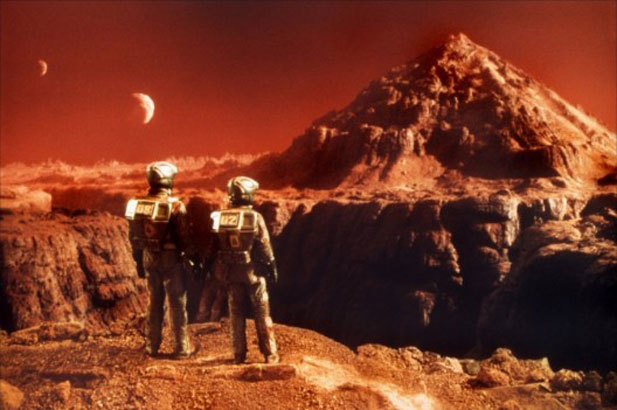 It’s a slight mindbender how Arnold Schwarzenegger ends up on Mars, but once he gets there, that's when the fun begins in this 1990 classic. Part steam-punk industrial and part corporate espionage, the Mars of Total Recall is a melting pot of “culture” set on the red planet. You have the higher-ups attempting to keep all life contained in their complex, the mutated outcasts and a red light district where women have more than two boobs. That alone warrants a mention on this list because the mind—any mind—reels at the thought. I have more than a few friends that would book a ticket to Mars for that alone…weirdos. 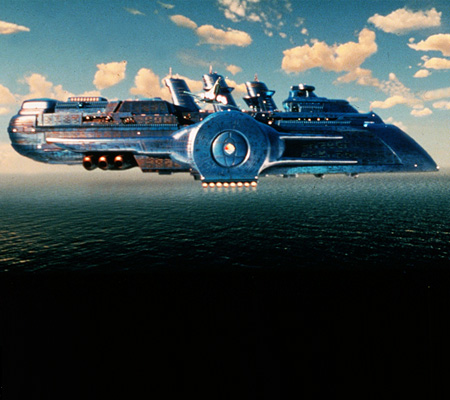 Admittedly, you don’t see much of the planet Fhloston, but rather its number one attraction: the luxury cruise liner Fhloston Paradise. Still, it’s not a stretch to see that Fhloston is one gorgeous planet, apparently equipped with beaches and waterfall vistas as far as the eye could see (sign me up). You get a planetary view with your dinner, some beautiful opera pieces and gorgeous people to wait on you night and day *wink*. Plus, if a gunfight breaks out with a hostile alien race, it’s nice to know the wide open spaces on both the planet and ship (surprisingly) provide plenty of cover to fight. Not to mention those pool tables can take a lot of bullets. In the words of one Ms. Milla Jovovich: “Wow.”

This one came down to 1956’s Forbidden Planet and 1955’s This Island Earth, both being sci-fi cult classics. Seeing as how “Planet” never got the Mystery Science Theater 3000 treatment, Altair IV wins out with good reason. Its artistic design has influenced the likes of numerous sci-fi films and TV shows (notably "Star Trek"), and even got some love in the opening song of The Rocky Horror Picture Show. Former home world to a species known as the Krell, Altair IV is depicted as a beacon of technological advancement, where thoughts made into reality are possible. Naturally, this kind of power wipes out the Krell and Altair IV remains one of the earliest examples in film of how technological advancement will wipe a species (and planet) clean. The Terminators can’t claim that on their resume.

Home world to Spock, pioneer in the art of bromance, Vulcan has remained one of the more memorable planets to come out of “Star Trek” despite the fact that it’s remained a bit of a mystery throughout the series’ various shows/films. Described (and later depicted) as a dry and hot world, with various deserts and mountain terrains, Vulcanians grow in a thinner atmosphere with higher gravity levels than Earth, greatly increasing the stamina and longevity of the planet’s inhabitants. It was also the Vulcans that were the first alien species to make contact with humanity in the “Star Trek” universe, making Vulcan and Earth bros on a planetary scale. Perhaps the most screentime for the planet (sadly) came in 2009’s reboot Star Trek, in which Nero—via an alternate timeline to the rest of the series—destroys the planet, killing most of its population. Talk about a bad way to claim the spotlight.

Another doomed one (surprise!), Krypton remains one of the more memorable planets in film due to the icon it gave us: Superman. How it’s destroyed and why varies depending on which story you’re given, but the planet’s destruction remains constant and necessary. Without it, Superman would never have come to Earth and squared off against Gene Hack—uh, Lex Luthor. We’re given little to work with in the film depictions of Krypton other than it's made out of crystals and that while its residents are wildly intelligent—though not enough to get off the damn planet faster—they’re in need of a makeover. Despite the planet’s destruction, it still plays an active role in the “Superman” series; most notably in the form of Kryptonite, Superman’s only weakness. The irony that pieces of his home planet could kill him aside, Superman consistently lives with both admiration and fear of his home world’s power over him. Now that’s a planet with personality. 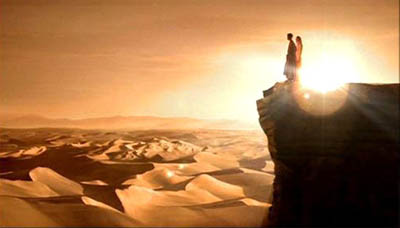 Screw Tatooine. Arrakis is the better desert world. For one, its giant sandworms don’t just hang out and wait for Boba Fett to fall in. They’ll fraking come after you and are about the size of the Chrysler Building. Often referred to as “Dune,” the planet plays a key role in its universe, being the prime source of Spice Melange. Needless to say, if you had enough of this spice, you were set in a number of ways. Since Arrakis was the only planet initially where this spice could be found, it made the planet a sort of Gold Rush, where everyone is clamoring to get in on it; few get out with much if they get out alive. With a fully realized culture and ecosystem that span books, film and TV, Arrakis remains one of the most memorable onscreen planets that you will likely never want to visit.

If ever there were a planet where you wouldn’t want to take a temp job, LV-426 would be that planet. For one, the pay isn’t that great. Weather is atrocious. There are a number of kids running around the halls and you’ll probably trip and hit your head. Oh, it also happens to be home to a colony of Xenomorph aliens that want to plant little ones in your stomach and watch them explode out of you. Before they eat you. Oh, and those kids. Earning more of a cameo appearance in the original Alien, Aliens takes place almost entirely on LV-426. In actuality, the colony is a front for “The Company” in an effort to study the Xenomorphs and preserve them for weaponized purposes. In a sense, LV-426 is a bit like if the Umbrella Corporation had their own planet. Its creatures are among the most dangerous humanity has encountered, and dammit they want to sell it to the highest bidder! Too bad Ripley took a nuke to the joint—you go, girl. 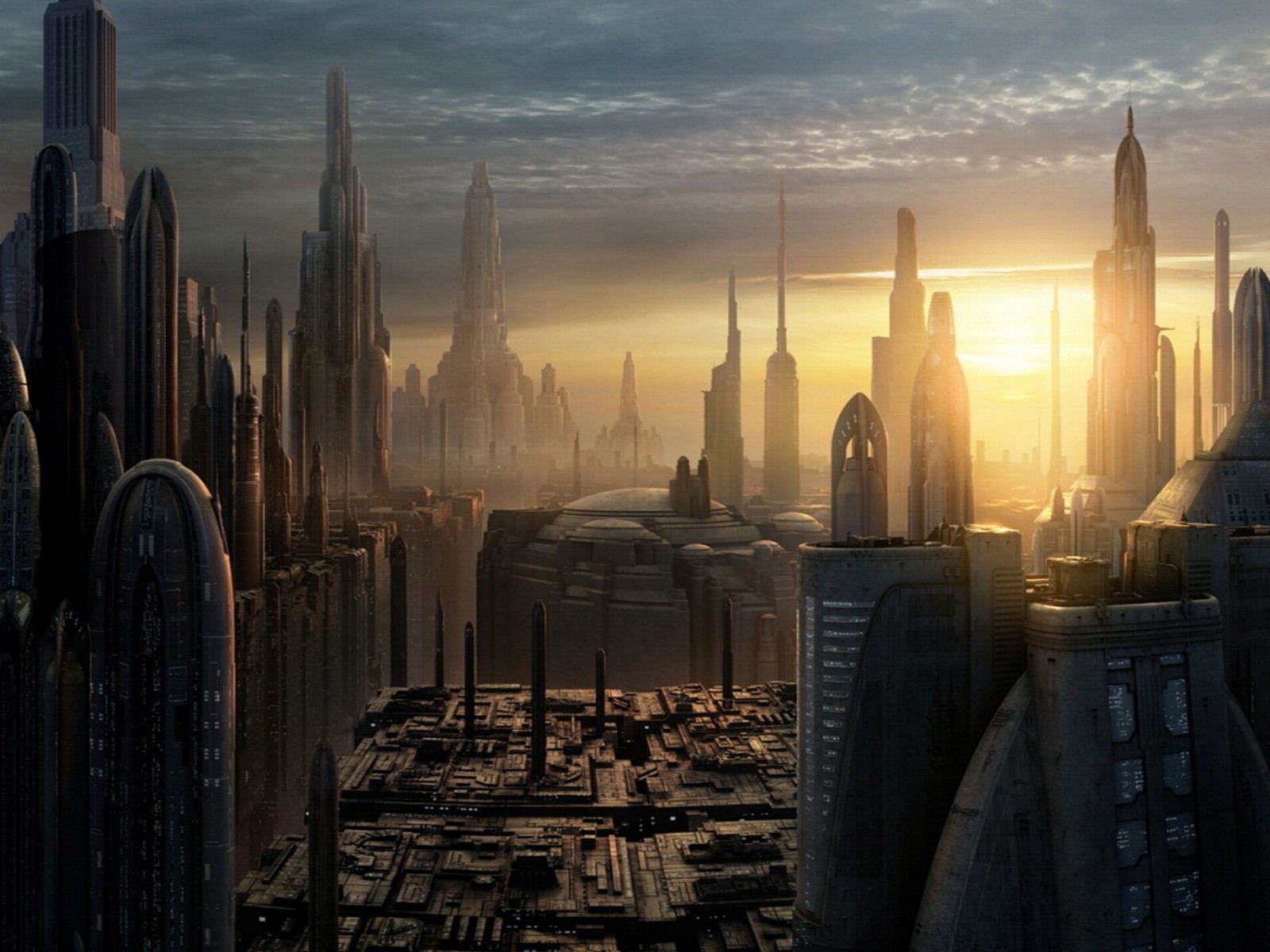 If ever there were a series to give us numerous sci-fi worlds, “Star Wars” takes first place (almost) every time. I’m sure many a fan could argue there are more memorable worlds to choose from within the “Star Wars” universe, but I don’t see them writing this feature. In that spirit, Coruscant stands apart for this writer; being the center of the Republic and soon after the Galactic Empire kind of makes you an important planet to be. A giant metropolis that spans the entire planet (think of the electric bills), it is the decisions made on Coruscant that ripple throughout the known galaxies of the series, even if you cannot see it. The planet never rests, everyone has an agenda and nobody is truly safe: not even the Jedi Temple (and its younglings) escapes destruction when the Empire shakes things up. Despite the prequel trilogy being a disappointment in most areas, they did give us a fully realized world in Coruscant.