The eagerly anticipated Sucker Punch, a sci-fi/fantasy film about a group of young women having to go to a fantasy world to escape an insane asylum, is about to hit theaters this weekend. The director, Zack Snyder, has described it as “Alice in Wonderland with machine guns.” To celebrate we are going to look at the top ten alternative realities we want to visit or escape to.

The Grid is every computer game fan’s ultimate fantasy: a virtual reality world that is black with colored lights. It is an action-packed world where it is the survival of the fittest and a place that has grown, evolved and modernized. We all know of the laser producing motorbikes and the aircrafts in Tron and Tron: Legacy that we all want to pilot. At the very least The Grid would make an awesome nightclub.

9. The Inbetween - The Lovely Bones

I confess this is a controversial choice, but Heaven is very hard to portray on film. Peter Jackson’s attempt focuses on Susie Salmon, a murdered 14-year-old girl, and what she would do in her perfect world. Susie could do anything she wanted and the world reflects her mood. It’s a 14-year-old’s world but it would change from person to person; however, it is a very lonely place.

8. Narnia - The Chronicles of Narnia Series

Parallel to our world is Narnia, a medieval world filled with talking animals and magic run by God, sorry, Aslan the Lion. There are many portals to Narnia but their rules of time does not mix with our own, with people from the 17th Century going into Narnia after people from the 1940s. The time lapses between the worlds range from epic to being the same as Earth's. But it is the only place you can talk to animals without looking insane.

Guillermo del Toro is known for his great imagination and Pan’s Labyrinth is one of the greatest illustrations of this. The Underground Realm is a world of escape for our young protagonist, Ofelia, who is trapped in Fascist Spain. Elements from The Underground Realm crossed over into the real world, from the Faun to Mandrakes, which show both the promise and the darkness this world offers. The weird creature with eyes in his hands is easily one of the most creepiest creations in recent film history. 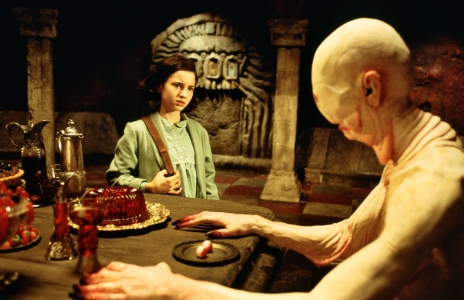 Oz is truly one of the most surreal worlds put to film and it is a favorite to many. Oz is a bright world, especially compared to the gray, boring world of rural Kansas -- well, if you can make friends with a scarecrow and a tin-man, it's obviously a lot more exciting. Academics, film fans and people who believe urban legends have debated topics ranging from the wizard representing politicians, the poppy fields being a drug reference and a Munchkin committing suicide (it was really a bird). This is a world where a bit of singing goes a long way. 5. The Spirit World - Spirited Away

Hayao Miyazaki is an anime genius and Spirited Away is one of his best films. The Spirit World is a world parallel to our own. It is a place filled with strange and wonderful creatures from dragons and witches to a weird Dr. Robotnik-like boiler room operator. It is a colorful, beautiful world that is both light and dark and a great example of Japanese fantasy.

"Dreams feel real while we’re in them. It’s only when we wake up that we realize something was actually strange.” Inception was Player Affinity’s film of 2010, a complex film about the psychology of dreams. In the dream world people can do remarkable things, but there are still limits; people’s subconscious will stop tempering and the outer environment can affect the dream world. When Cobb and Mallorie were trapped in the Dream World for years, they were able to create the most incredible city filled with architecture and buildings from around the world.

Who Framed Roger Rabbit is a childhood favorite of mine and itself a world I wanted to visit, a place where humans and cartoon characters co-exist. Most “Toons” live in Toontown, a truly surreal world where almost everything is alive, nothing is impossible or what it seems and the only place where Mickey Mouse and Bugs Bunny are on screen together. But you have to watch out for the homicidal canary bird. Have you felt that something is not right with the world, that it does not seem real? Then you are not alone. The Matrix is a virtual reality world created by machines as a way to control humanity, but it so damn cool. And when you are aware that this reality is fake you can break the rules and do whatever you want. Knowledge could be quickly placed into your head and martial arts and firearms would be a part of day-to-day life. It is dangerous but the real world is not much better.


J.K. Rowling’s novels and the film franchise that it created has indulged many young people’s fantasies with the world of magic. We all know the story: Harry Potter was an orphan abused by his aunt and uncle, but when he finds out he is a wizard he is able to go to a world within our own. If you are willing to learn, you will be able to manipulate the physical world, be able to turn yourself into an animal and see a lot of fantastical creatures. And who would not want to eat Bertie Bott’s Every Flavor Beans -- but make sure you do not eat a snot flavored one.