It is an undisputed fact that there are some horrific monsters in video games. These were created by developers with a specific goal in mind: Scare the hell out of the player. Check out our feature on the most horrific video game monsters to see this in action.  But sometimes, developers have no intention of scaring the poor player, yet that is exactly what happens. The original intentions of these unfortunately-designed characters are lost on players, as they are too creeped out to even comprehend the true nature of the character. With this in mind, here are the top five Unintentionally Scary Video Game Characters: 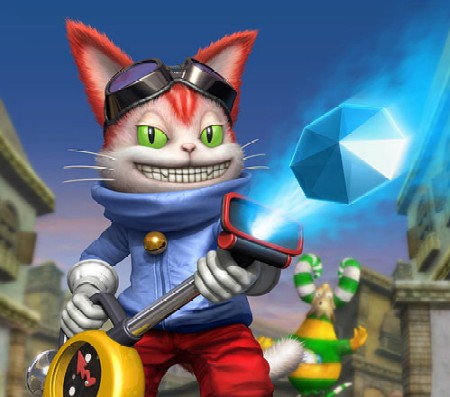 5. Blinx from Blinx the Time Sweeper (Xbox)
More video games need cats as their main characters. Blinx the Time Sweeper filled this gap by letting the player control a cat…with attitude! While Blinx might look cute and fuzzy (of course he does, he’s a cat), there’s something about that odd, slightly askew toothy smile that burns a nightmarish image in your mind. His large green eyes appear to be looking into your soul, as if he knows exactly what you did last summer. 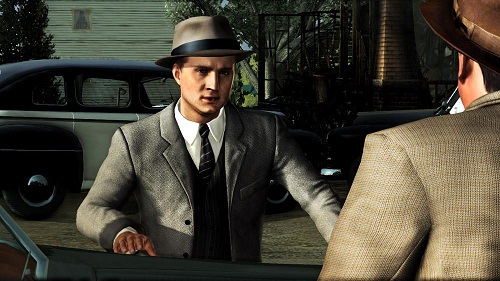 4. Anybody from L.A. Noire (Xbox 360, Playstation 3, PC)
This is the “uncanny valley” at its finest (or its worst). As computer generated characters become more and more realistic, they start to become more and more creepy. The characters in L.A. Noire are fantastically realistic, recreating the facial movements and other gestures of a real human being almost perfectly. But your brain is confused. It knows that what it’s seeing is not alive, yet at the same time it’s not sure. Once the “uncanny valley” phenomenon sets in, you can’t help but be simultaneously fascinated and repulsed at the characters. 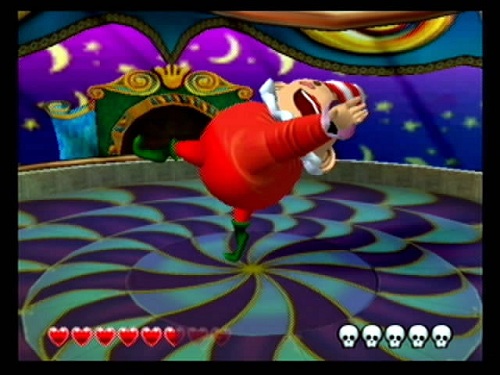 3. Clown-a-Round from Wario World (Gamecube)
While Wario World has many disturbing visuals, none are quite as disturbing as Clown-a-Round, the boss from the “Wonky Circus” level. This child-like creature’s high-pitched cackle is enough to make any gamer cover their ears and shut their eyes, but the fact that he rips off his own head right in front of you is just too much to handle. Oh, and did I mention that you become surrounded by 20 other floating versions of his head? 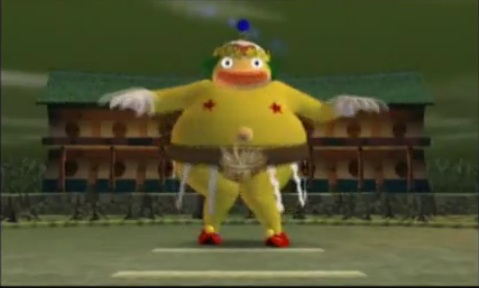 2. Yellow Monkey from Ape Escape 2 and 3 (Playstation 2)
The Ape Escape series are the best monkey-catching simulation games around (although it might be the only one). While Ape Escape 2 upped the cutesy factor, there is one boss that had even the bravest gamers shivering with fear: Yellow Monkey. This abomination of monkeykind had gamers so confused and terrified as to what they were looking at that they tripped over their controller wires trying to reach the “off” switch. Whether it is the deranged high-pitched voice, disturbingly placed camera angles, or the fact that “he” (and I use that term very loosely) turns into a giant, Yellow Monkey was the subject of many gamers’ nightmares for weeks.

1. Tingle from The Legend of Zelda: Majora’s Mask (Nintendo 64) and too many other Zelda games
You knew this was coming. This 35-year-old man-elf-fairy has had gamers classifying the Zelda franchise as a survival-horror series since 2000. In Majora’s Mask, Tingle sells you maps of different parts of the world. Many gamers, however, chose to wander Termina blindfolded without a map, just so they wouldn’t have to encounter Tingle. I’m not really sure the horror of this character was unintentional. The only things more frightening than Tingle himself are the Tingle cosplayers. "Tingle, Tingle, Kooloo-Limpah!"

Any other unintentionally scary characters not on this list? Sound off below in the comments, along with your Tingle-related horror stories!