By: | Movie Features | December 24, 2011
If you relied on the movies for your history education, you might not even know about a little conflict called World War I. Think about it: When was the last time Hollywood tackled the original Great War. World War II, of course, is a prestige director's bread and butter--the road to an Oscar, according to Kate Winslet on the show Extras. But WWI seems to be the one the movies forgot.

Or is it? Steven Spielberg, apparently tired of making awesome WWII movies, is releasing War Horse on Christmas day. The film is about a young man trying to reunite with his battle-tested horse. And though it might not have a ton of company in the WWI-movie category, the company it does have is quite esteemed. Here are five of our favorites:

All Quiet on the Western Front

Only the third film to ever win a Best Picture Oscar, this adaptation of the famous Erich Maria Remarque novel follows a group of young German infantrymen. Revolutionary in its time for a sympathetic depiction of the "enemy," the film certainly looks dated, but the message endures to this day.

Both Charlie Chaplin and Orson Welles were once asked who they thought was the greatest film director. They answers were the same: Jean Renoir. Arguably the greatest war movie ever made (and undeniably ahead of its time), Grand Illusion follows a pair of French officers whose plane is shot down. They're captured by Germans and held as POWs, but one of them is an aristocrat and treated much differently than his fellow countryman. It's a fascinating look at the European class system and how war dehumanizes us in some ways, but not others.

Stanley Kubrick's 1957 film signaled the arrival of a major talent. Before this, he had only directed a small-scale noir (The Killing), but this gut-wrenching anti-war message movie is stunning in its simplicity and emotional power. After giving it their all in a seemingly impossible attack, a group of French soldiers retreat, but their grandiose leader sees their actions as cowardly and decides to make an example out of them. What follows will floor you.

Many people forget this is actually a WWI film, but it is. It just doesn't take place on the European front. David Lean's epic masterpiece about T.E. Lawrence leading the Arabs to battle against the Turks is widely regarded as one of the best movies ever made. Is it? Maybe not, but it's damn impressive. 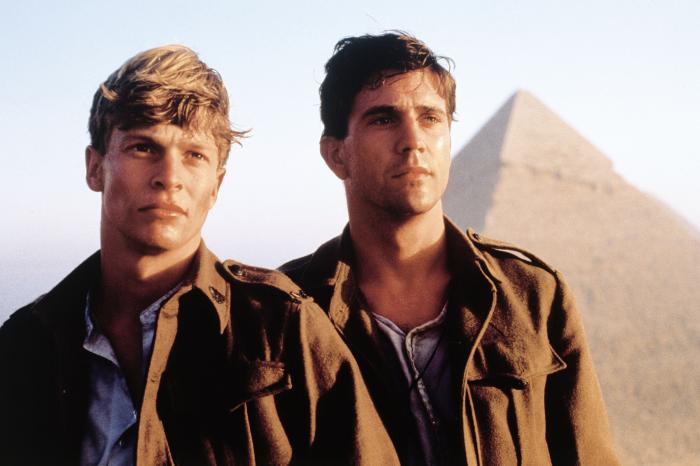 Another WWI movie, another trip to the Turkish front. This 1981 film, directed by Master and Commander helmer Peter Weir, stars a young Mel Gibson and focuses on two Australian men who get in way over their heads when they volunteer to fight. Sounds a little like "All Quiet"? It is, but this one is newer, funnier, and much more impressive-looking.