On paper, it has such potential: An intriguing setup, a beautiful setting, a young director who struck Oscar gold and two of the biggest names in show business to play his leads. All the pieces are set up, so how hard can it be for this to come out right?

If anything, The Tourist shows how it takes more than just the right pieces to make a good film, let alone a great one. It requires the proper execution and an "X" factor that's near impossible to describe. Florian Henckel von Donnersmarck (please don't make me type that again) makes his Hollywood debut with Angelina Jolie and Johnny Depp in this loose remake of 2005's French film Anthony Zimmer, and if the finished film is any indication, he has a long way to go before he can transition the intimacy and authenticity of his debut film to the Hollywood setting.

The film opens with Elise (Angelina Jolie) going about her day while under surveillance for unknown reasons. When her former lover, wanted by both Scotland Yard and a vicious gangster for grand theft, contacts her with instructions to find him a body double and head for Venice, she chooses Frank (Johnny Depp), a hapless American touring Europe after the loss of his wife. When Frank is mistaken for Elise's former love, he finds himself in the cross hairs of those who would capture and/or kill him to acquire the fortune he knows nothing of. 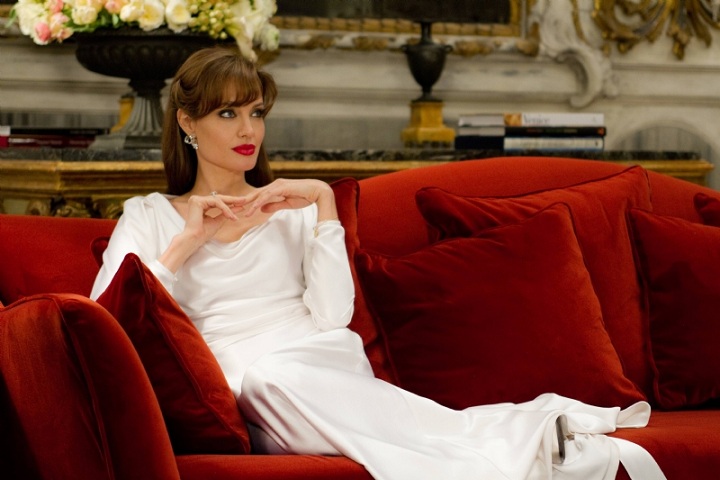 The film makes no mistake of it's identity as a “thriller.” You have several aspects found in Hitchcock thrillers here: mistaken identity, hidden pasts, the elusive femme fatale, an original score that just won't stop (seriously, not one second of silence) and the big reveal at the end meant to make the audience scratch their head in awe. If you're in awe, it'll likely be along the lines of saying out loud, “that's it?”

For being among the more capable actors of their generation, it's surprising and a little sad to see how Depp and Jolie, after all the publicity surrounding their first time working together on screen, have virtually no chemistry. We're meant to believe in an instant connection between the two, that even if or when it is explained fully, would still not be believable. Jolie does well enough as Elise, giving her an evened out balance of mystery, strength and heart, but not enough depth on any of these fronts. Depp is particularly surprising in how boring he is. Mind you, Frank is a boring guy caught up in what are meant to be extraordinary events, so in some way Depp's performance makes sense. Still, The Tourist will not rank high on his long and colorful resume.

Most thrillers capitalize on great chase sequences, which when done well, can truly elevate a lackluster story and characters to another stage. Chases are present in The Tourist, but are few and lack any real peril for those involved. In fact, they almost come off as comical and only take away from the filmmakers attempts to build any tension (this is supposed to be a thriller, right?).

One thing the film does have going for it is that it looks and sounds remarkable. While the score won't give a viewer much time to breath, it does have a varied energy to it that helps to keep moving things forward, even if they're not all that exciting. Venice is Venice, and it'd be pretty hard to frak up how gorgeous it is, but the crew is able to give some life to the city yet.

Unfortunately, The Tourist is another example of how style does not always equate to substance. It might look good but like the gorgeous guy/girl in your high school Bio class, (chances are) there's not much going on upstairs. It thinks it's funny, clever and sharp when it's just young, pretty and without a sense of direction or depth. One wouldn't ask the world of von Donnersmarck when he makes his Hollywood debut, he's allowed to make a few missteps. Still, when you take an Oscar away from Guillermo del Toro, it's not unreasonable to expect more substantive bang for your buck. Rating: 5/10

The Tourist Directed by Florian Henckel von Donnersmarck Written by Florian Henckel von Donnersmarck, Christopher McQuarrie and Julian Fellowes Starring: Angelina Jolie, Johnny Depp, Paul Bettany Other Player Affinity Reviews Dinah thought: "What a waste of talent. The pairing of two of Hollywood’s most sizzling hot stars, Johnny Depp and Angelina Jolie, is reduced to an ice cold romance. Deceptive marketing portrayed The Tourist as a spy thriller; an exciting romp in an exotic locale. This is just your standard romantic drama sans the romance … and the drama. Greeting cards have more depth and pop-up books more excitement than this predictable and anticlimactic tale. The director attempted to lay all weight on the good looks of its leads, but beauty can’t slay this beast." Rating: 3/10 Simon thought: "No chemistry the reviews say? Well how about having your two leads on screen together long enough to have a chance at playful interaction. Alas, this is one of the minor faults of this rather inert and eventually ludicrous thriller that would not only make Alfred Hitchcock roll over in his grave but want to break out and seek revenge. Over the course of The Tourist I kept returning to the possibility of a lame and nonsensical twist to which I would promptly brush off. But there it was again, that nagging feeling, but again, no, this was merely a subpar (but at least playful) espionage flick. Then the ending came and all my previous fears came rushing back in a finale that tanked all previous 85 minutes; I hate it more and more every time it crosses my mind.  Without the twist, you have no film (or at least a different one) but the plot fibres keeping the entire production in place are thin as recycled paper; maybe they should have just used the screenplay instead." Rating: 4/10 Player Affinity Composite Review: 4.0/10
Rating
4.0