When last we left Kronus he had his head smashed in by the Minute Man Mortar. Gabe, the man he was rescuing is begging for him to wake up and suddenly he does after being in a time comma. Kronus then shifts the temporal rewind that sends every bit of matter that Mortar has created right back at him. As with all of the Minute Men when they’re knocked unconscious they return from where they come from. Kronus then begins a cryptic conversation with Gabe asking him for a reward for saving him. Gabe only has his bowling ball to offer him, which Kronus is counting on. He asks him to deliver it to a certain place and time. He warns Gabe to be on time and to just drop it off and go.

Ron is late for his diner date with Julia and arrives to see her working on the Kronus case. Their fight begins almost immediately. We then cut to Dr. Colding lying in bed looking at pictures of Julia. Martin calls him and asks him to come up to the lab immediately. Back at the restaurant Ron is drinking like a fish as Julia won’t drop her case. She’s convinced that there’s a pattern to what Kronus is doing. She asks what Ron’s problem is and he snaps at her about it being the night before his big experiment and that Colding is trying to get rid of him and so forth. The fight is about to get worst when Kronus shows up to interrupt. 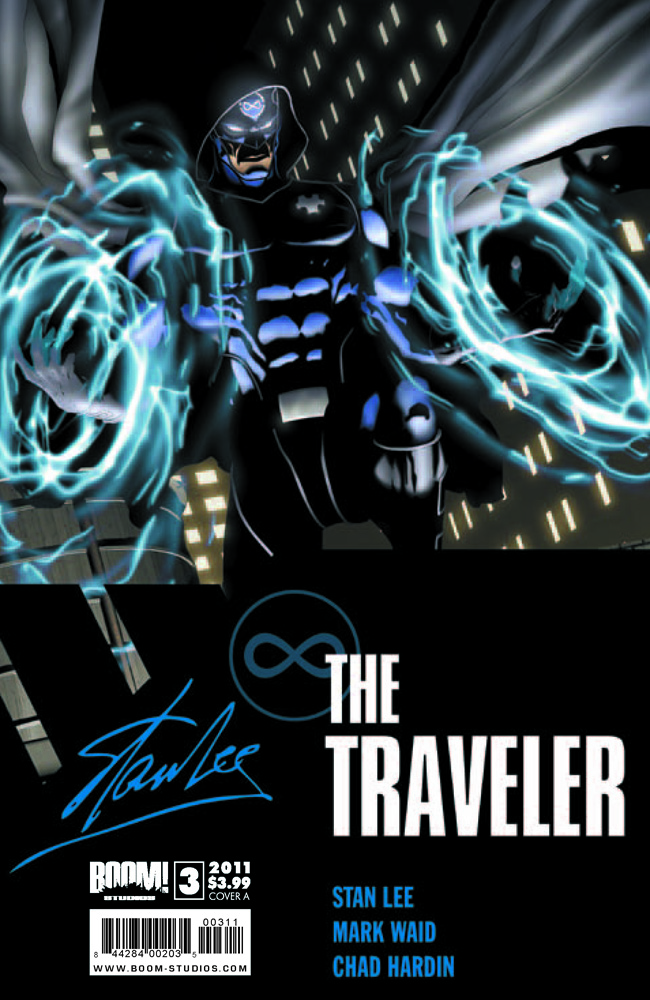 Colding meets Martin (Julia’s Father) in the lab and wants to know what’s so important. Martin tells him that they’ve been sabotaged and that the experiment must be put on hold. Colding asks Martin which terminal has sabotaged the experiment and of course its Ron’s which is a total set up. They agree to work through the night to fix it and Colding asks Martin to help him at the top of the lab. There he pushes and then dangles Martin from the top ledge. He makes Martin put the pieces together that it was actually him that sabotaged the experiment to accomplish two things. 1) Get Martin out of the way and 2) Get Ron out of the way so he could be with Julia.

The pieces begin to unfold with this issue as it’s finally revealed 100% that Kronus is Ron from the future. It’s obvious that the small things Kronus is putting into effect are to change something in Ron’s life from happening and him ultimately losing Julia.

Mark Waid has a couple of tongue in cheek jokes that are well placed and humorous for the story. This issue had a few too many scenes going back and forth and ends up all over the map, but it’s still a great issue due to the reveals. Waid’s writing is in top notch form as he makes Kronus as witty as Spider-man, but his own character at the same time. There’s really an endless amount of possibilities for Kronus to solve problems with his powers and it’s interesting to see what Waid and company come up with.

The art is consistently good throughout the issue and Chad Hardin is the perfect fit for Waid and the story. He draws convincing action sequences as well as interesting conversations. Then he finishes it off with a Sci-fi future setting that foreshadows the future of the story. At times the pencils seem a bit rushed especially in the restaurant when Ron is pounding the booze, but overall it’s great art
work.

The Traveler remains in my opinion the best of the three Stan Lee books from Boom! Studios. I think it’s the Traveler’s powers that make it so interesting as he control’s time, but can actually do very little to alter it. His wit and sarcasm is familiar yet very refreshing because it’s not the same old character making the jokes. With the fourth issue out 2/23 you may want to track down the first three issues of the Traveler if you haven’t been reading it. The fourth issue marks the end of the first story line and personally I can’t wait to see what’s in store for the ending.

If you’re wondering why you should be reading this series then check out our reviews for the first and second issue as well.