In the last issue Ron crashed into some one very familiar to him, or rather her picture is familiar to him. Danielle the woman Kronus rescued from the first issue has been driving without her glasses ever since her rescue and because of it has crashed her car. Ron recognizes her from Julia’s case file, but can’t deal with it at the moment since he’s on his way to his big experiment. They exchange information and Ron takes off to catch a bus. He jumps on and wouldn’t you know it… it’s the driver that Kronus saved in the second issue.

Ron drifts off into a daydream about Julia and begins kicking himself for missing his change to ask for her hand in marriage. He drifts so much that he misses his stop. He begs the bus driver to stop, but the bus driver can’t be late again after all he promised Kronus. Ron sweat talks him for a bit and finally the driver lets him off and Ron has to run back to the faculty. Back at the lab Colding and three very familiar men (split second men) are preparing the experiment that is destined to fail. Julia arrives looking for her father and we can see that everyone is in very futuristic lab suits that leave little to the imagination. Colding informs her that he has seen Martin and wondered if she knew where he was, which is a lie since he killed him the night before. 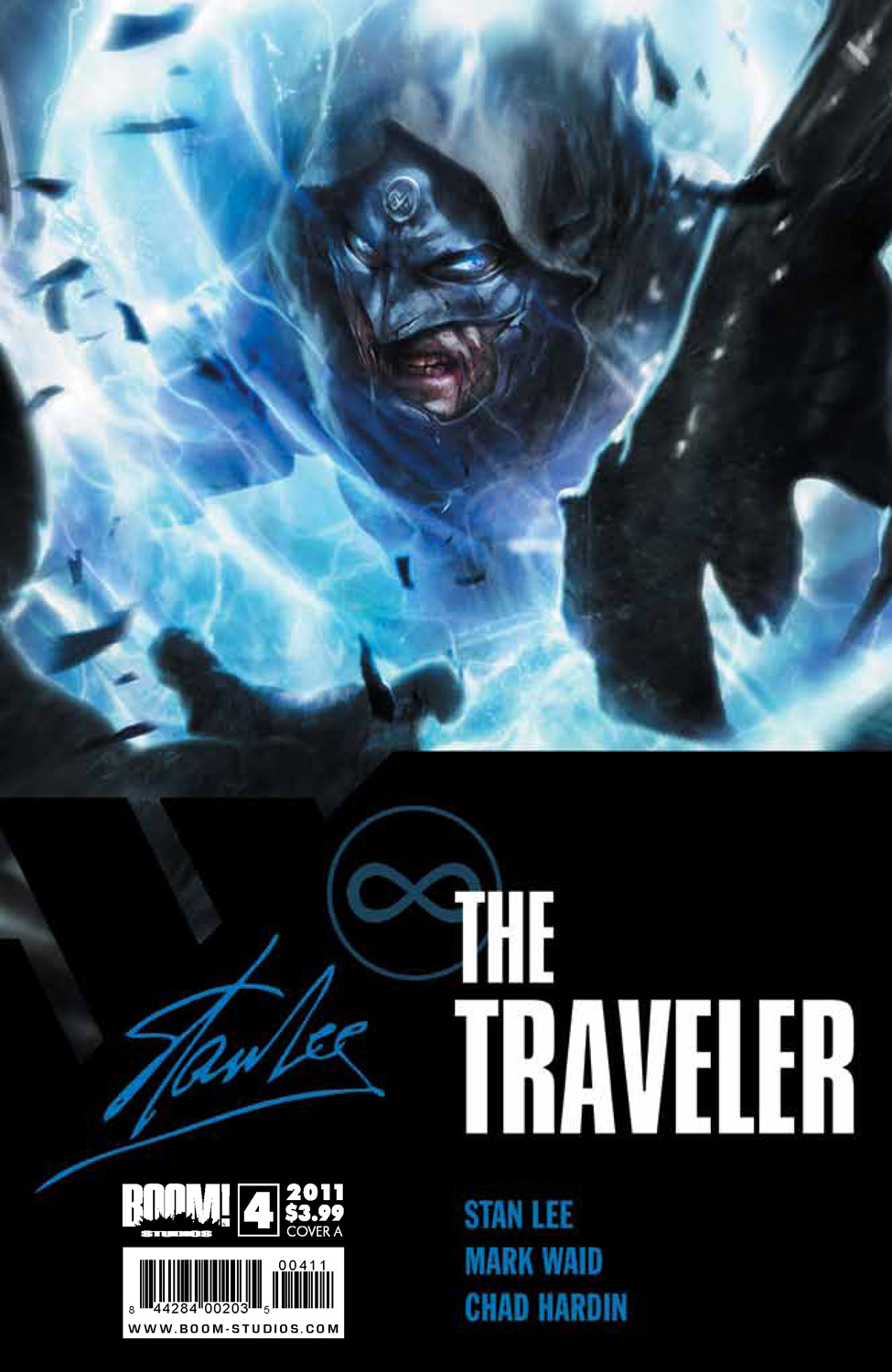 Ron finally makes it to the faculty only to be stopped at the gate. There is a bomb threat at the faculty as someone has left an unmarked bag at the front gate. The bag is, you guessed it the bowling ball bag that Kronus asked Gabe to leave for him. The bag has the lab locked down and thus keeps Ron out. As he stands outside pissed off until one of the Split Second Men pops out of his watch from the future, then disintegrates the wall so that Ron can enter the building. As Ron runs into the building he’s now stopped by Kronus. Ron goes off on him saying that he knows that he put the different people in his way on purpose to stop him from getting to the experiment. Ron attacks Kronus with the bowling ball bag.

Kronus let’s Ron pass finally saying that he’s made him late enough and that events won’t change anymore then they have already, but not before revealing himself as Ron in the future. Ron changes into his futuristic lab suit and joins the others in the main lab room after brushing off Kronus' reveal. He embraces Julia who then asks about her father; Ron also doesn’t know where her father is. Colding instantly confronts Ron about being late and tires again to fire him. Something that Colding says makes Ron check his terminal and he instantly picks up on the sabotage, too bad for Colding he wasn’t as good as he thought he was.

The book gets pretty intense from there, but one thing is for sure it’s one of the best comic book origins in comic’s period. That’s right Mark Waid and company used the first four issues to tell you a character’s origin rather than shoving it into the first issue and moving on to the meat of the story and for that I thank them. What Waid also does in this issue is take the character of Ron and Kronus and completely flip them upside down from what they are to what they’re going to be.

It’s nice to see the puzzle completed as Waid also wraps up all the small pieces that he’s been building in the previous three issues. These bit characters played such a huge role in the story and most people probably wrote them off after their individual issue appearances. The most difficult part of reading this issue is waiting for what you know is going to happen to actually happen. You want to just skip ahead, but you’re afraid of being wrong so you can’t.

The art is at its best for this issue which is good since it’s the pinnacle of the story arc. Chad Hardin does a great job of just showing a normal world that is occupied by average people trying to get to work, bus drivers that don’t want to be late and the occasional mad scientist. Hardin has a great range that can be fully appreciated in this issue. He’s a convincing car accident from more than one angle, then a very detailed city bus and as dumb as it sounds a realistic looking bowling ball and bag. His rendition of Julia in her "lab suit" is stunning and could be mistaken for one of Frank Cho's voluptuous beauties. Hardin’s style is just spot on for the series and I’m curious to see what he can do now that the origin is over.

This book does an amazing job of wrapping of the first story arc and no one buying it should feel cheated or short changed by the story that’s given to them because it’s that damn good. Waid and Hardin are a great team that has told one of the best origins in the history of comics. The Traveler’s story is just beginning and if you’re not on board for than I suggest you try reading the comic book right side up. Lastly, the covers are bad ass! The Traveler # 4 is in stores 2/23 and since it has Stan Lee’s name on it, it should be hard to find a copy.