Stan Lee, Mark Waid and Chris Hardin return with an all new storyline for The Traveler that picks up after the big reveal in the last issue. After some men dressed in hazmat suits clear the area of the accident, they warn the police detectives of the “ghost” that they’ve seen in the area. The “ghost” is of course Ron aka Kronas. He over hears his fiancée Julia’s ex-partner talk about one of Ron’s friends, which gives him an idea to visit him.

He pops in on Nate (the friend) who is looking rather sad, obviously due to the fact that he thinks his friend is dead. Ron and Nate begin going over the facts as Nate is able to quickly accept Ron being alive. Nate yells at him for looking at everything negatively and asks about his powers. Ron begins practicing his powers around the lab as Nate is able to coach him. Ron can’t continue as he thinks about Julia and begins to cry. Nate offers the help of his machine that he’s working on and the two proceed to his work station. 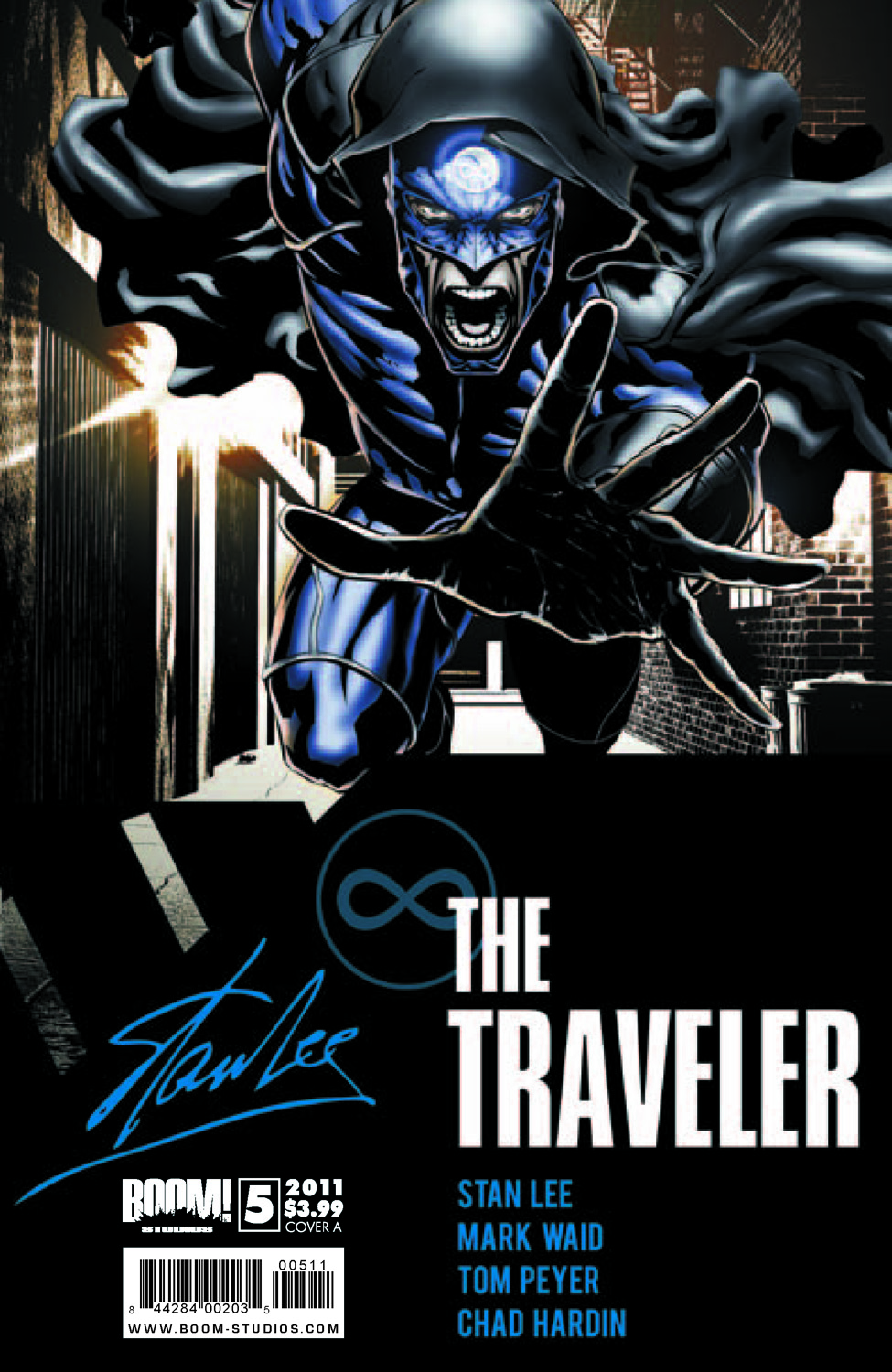 There Ron uses his powers to improve the machine to its future self and an image of Julia appears. Too bad Abaris aka Dr. Colding is watching him and sends some mutant/alien henchmen after Ron. A fight ensues and Ron ends up teleporting everyone in the room to another planet, including himself.

This issue was a bit disappointing. The story was all over and there wasn’t nearly enough time spent developing the characters as there should have been. The opening sequence eats up a lot of pages and is only there to introduce the convenient science friend of Ron’s that was never mentioned before. Nate knows way too much about his powers and it’s played off that he saw it on the news and figured it out. Granted there has to be some way for Ron to learn, but I’m pretty sure that his future self gave him plenty of hints and the rest he’ll have to figure out on his own. It was one of the things that made the ending of the first arc so interesting; Kronas knew what he was doing and walked the reader through it as he was using his powers. Ron on the other hand was going to have to discover the powers and thus learn with the reader again how to use them. Instead his friend that appears out of nowhere has all of the answers.

The writing in this issue really comes off like Waid phoned it in and left me wondering if he spread himself a little too thin. There’s a stark contrast between the first arc and the beginning of the second. Even though the true character of Ron was very under developed in the first arc, all of his personality and heart have been stripped away to come off like a man that’s just cranky and bitter. The ending and tragedy save the story a bit towards the end of the issue which does recover from the poor opening, but it doesn’t hit the mark as high as I was expecting.

The art is shaky as well. Hardin’s style comes across as goofy and rushed. It may be due to the change in colorist. I really think that it’s equal parts, as the new colorist Chris Beckett needs to mimic Blond’s style more and see what he did to improve Hardin’s pencil’s. Hardin on the other hand needs to work on being more consistent and not rely on the colorist to tune up his work.

Hopefully Boom! doesn’t keep to a strict schedule on this title and lets the creative team catch up some, otherwise I’m afraid interest in the book is going to be base off of name recognition alone; which would be a disappointment since the first four issues were incredible and no one’s name was bigger than the Traveler's on the cover. (That is to say that it didn’t need the other three to sell the book, because it was that damn good on its own.) If you’ve been reading the series and enjoying it, then stick with it as this issue is still a good read. Just know that it’s not as good and could have been a lot better.