Stan Lee and Mark Waid join forces to give us The Traveler. It should be a match made in heaven or what people called a dream team. Maybe it is or maybe is not. Well so far they are up to issue 8, four issues shy to that first year mark. Now I'll be honest with you, this is the first issue of the Traveler that I picked. When I read it, I was like "what the $&@? Is going on here?" So I read the other seven issues, to have an idea of what this comic is all about. When I read all those I understood, the Traveler is Stan Lee's version of Doctor Who with a twist. A time traveler that can manipulate time. Who is often the cause to many of his own problems because some future self manipulated the past to orchestrate a course of action that will be beneficiary to his mission.

Like I said when I read this book I had to read the previous ones, but not because the story was so good that I needed to get more, no sir, I had to check the other issues because I needed to understand what the hell is going on here. Even though this book has a recap page this issue is not new reader friendly. It is the end of the second story arc. This issue is about kicking the bad guy's ass. Sure faithful readers can get a kick out this issue, specially if they love "time twisters"  if not be prepared to get a headache because this book doesn't stop to explain things. You either follow this adventure or you stay behind reading issue one. 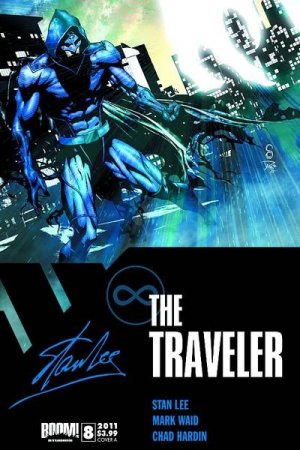 Another thing don't expect this book to deliver some deep character development because it has none. We barely know what the main character's name is. Its not easy to sympathized with the Traveler's goal (to save his girl, Julia) because we don't know jack about Julia. So when in this issue the bad guy (who happens to have the same goal even more determine than our hero) revives Julia from the memories of the Traveler; the readers could care less to what could have been a nice dramatic emotional moment. Last issue we saw Amelia Earhart and some other personalities from the annals of history, famous for disappearing from time are not featured in this issue. This concept is interesting and could've been explored more in this issue.

The writing is sharp but gets confusing rapidly, mainly for the time traveling aspect. The characters needs to be explored more, after all this is a Stan Lee book, the personalities of the characters is what really made his career. The ideas on the book are quite imaginative but the pace is too fast to actually enjoy them to the fullest. This book needs to slow down a bit so that we can enjoy this new universe. I don't care much for descriptive captions but this book might need a couple of those, to help describe the abilities and the manipulations the Traveler does to time. Or they could add more supporting characters so that they can work as a mean of exposition.

The art is great. A tremendous job from Chad Hardin, his ability to illustrate the story brings a charismatic energy into the page. Unfortunately the designs of the characters are generic. The Traveler looks like he came from a online superhero MMORPG with generic costumes designs. Other than that, the special effects and the world surrounding the Traveler are done with a keen understanding on how this world works.

If you like Doctor Who and time traveling stories you should check this book out because the time traveling part is clever and well crafted-- it really is the only thing keeping this book interesting. As for the character of the Traveler? I read all 8 issues in one day and I still can't remember what his real name is. So don't get this book if you are looking for a solid character driven story, pick this book if you are looking a entertaining Sci-fi book.

Overall Score - 6.0/10
*Satisfactory - A title that's not for everyone, has a few stand out moments. Maybe if you have a few extra bucks it's worth picking it up. Enjoy a mild time traveling migraine with this one*