The Walking Dead – Days Gone By

In the early moments of The Walking Dead, AMC’s tense and atmospheric new horror series, our main character, deputy sheriff Rick Grimes (Andrew Lincoln) awakens from a coma in a hospital bed to an entirely new world.  It’s one where the streets are filled with wreckage and corpses, and there isn’t a (living) soul to be found.  The city is hardly deserted, though, as the dead still shuffle around, driven by an insatiable need for flesh.  It’s an opening that anyone familiar with zombie-films will recognize, perhaps most famously from 28 Days Later.  It struck me as strange that while this was just one of many references to known zombie-lore, none of the characters in the show seemed aware of any of this. 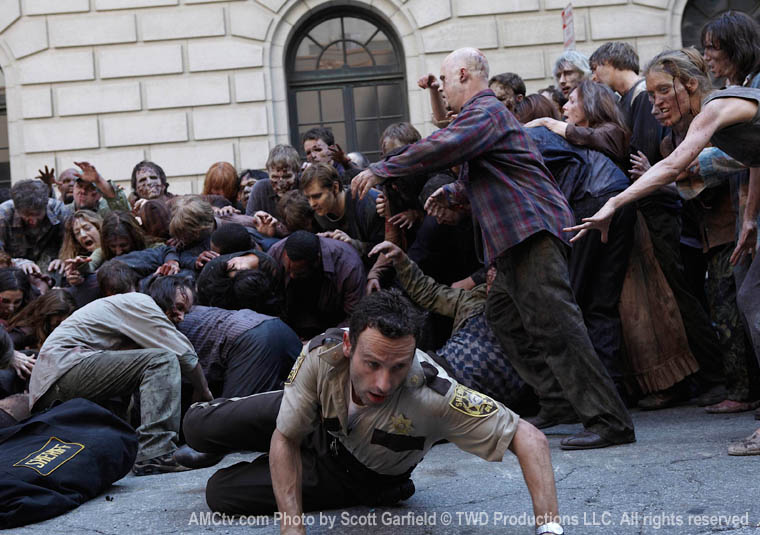 I’m sure that if there were to be a zombie attack in real life, it would be so shocking and unbelievable as to defy rational thought.  But I also think that, were flesh-craving, moaning corpses with chunks of their bodies missing slowly shuffling towards me, my reaction, after I initially peed myself and cried in a corner, would be “holy crap!  It’s just like Night of the Living Dead!”  In The Walking Dead, no character even utters the word “zombie,” even though the slow-moving corpses resemble them in every conceivable way.  It begs the question, does this show exist in a world were not a single zombie film has ever been made?

This may seem like a minor complaint, but in a pilot episode that’s greatest strength lies in its ability to portray realistic character actions in totally unrealistic situations, it stood out.  Other than their refusal to use the z-word, the characters all behave in relatable ways, from Grimes’ single-minded determination to find his wife and child who’ve gone missing, to Morgan Jones and his son Duane, who Grimes meets on his travels and who are trying to deal with the grief that comes from having lost a wife and mother.  Of course, their situation is compounded by the fact that the corpse of their lost loved one wanders by their house at night, occasionally trying to get in the front door (whether this human-instinct means that some portion of their human selves still exist in these zombies is a question that the show has yet to answer).

This section, in which Grimes interacts with the grieving family, is the high point of the episode and strongly displays show-runner Frank Darabont’s admirable goal of focusing on the characters and the emotions amidst all the chaos and carnage.  But, thankfully, despite the characters refusal to acknowledge the zombie-reality, Darabont (working from a graphic novel by Robert Kirkman) is not above embracing the more gruesome aspects of the genre.  Darabont is best known as the writer-director of The Shawshank Redeption, but he has also shown a true affinity for the horror genre throughout is career, directing the Stephen King-adaptation The Mist, and starting his career as a screenwriter working on films such as the 1988 remake of The Blob.  His love of the more pulpy aspects of the genre is apparent from the opening scene, in which a cute little girl is revealed to be a blood-thirsty zombie who must be put down, to later when he shoots a scene of a horse being ripped to pieces with particular relish.  The focus on smaller, character moments are wonderful, but I also appreciate the fact that Darabont and AMC, the critically-acclaimed cable network, are not embarrassed by the fact that this is a show that is, at its center, about a plague of flesh-craving corpses who have taken over the earth (or at least Atlanta.  We’ve yet to see much of the world beyond that). 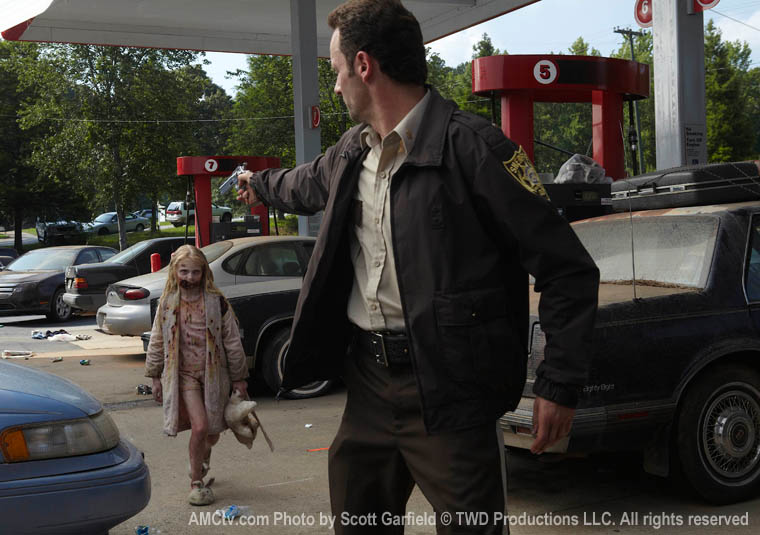 Grimes’ search for his wife and child seems like it will become the main arc of the show’s six episode first season, and Darabont makes the curious choice of telling us halfway through the pilot that they are indeed still alive, and his wife has taken up with his former partner.  This feels strange mainly because it was the one scene in the entire hour and a half-long episode which doesn’t focus on Grimes, but also because it put us ahead of the character, taking away the emotion that would have accompanied us watching a man search for a family that in all likelihood is already dead.  My main frustration with the episode came from having to wait for a character to finally arrive at the same conclusion (zombies!) that we the viewers had within a minute of the show’s start.  My concern is that knowing this information about his family will lead to feelings of impatience with the main character and the show.  However, I imagine that future episodes will put more of a focus on Grimes’ wife; giving her plotlines of her own, and hopefully justifying her inclusion as a character, so perhaps my concerns will prove unfounded.

Despite some reservations, I am extremely excited to follow this series’ exploration of a zombie-run world.  Especially now that the introductions are out of the way and Grimes has accepted what’s happening around him, we can get more into the gory details of zombie-world survival.  Of course, we can also get more into the character details and difficult choices that Darabont portrays so well, but more than that, we can have way more gruesome decapitations.