The Walking Dead Season 2 Episode 5: No Going Back (X360) Review: The End of the Line

"Can Telltale deliver one final gut punch in the season 2 finale of The Walking Dead?"
By: Matt Rowles | PC Reviews - PS3 Reviews - Xbox 360 Reviews | August 28, 2014
No Going Back is an apt title for the Season 2 finale of Telltale’s The Walking Dead. With the last episode being the worst in the entire series, there was a lot riding on this finale for me. Season 3 had already been announced and I was beginning to question whether I was still on board after loving the first season but having growing frustrations over the last few episodes. No Going Back is certainly the best episode of the season, and has some of the best moments we've ever been forced to endure and participate in.
Action sequences and zombie encounters are really limited and I really enjoyed the change of pace. Usually the more dialogue heavy episodes can become rather boring, and while some early scenes were slightly drawn out, the final few scenes had so much drama that I really didn't need to dodge some zombie bites to keep me interested.

One of the few action sequences involves the group crossing a frozen lake slowly to reach the other side. You immediately know it is going to go wrong but you still find yourself holding your breath, slowly walking, in hope to not break the ice below. The scene is very well done and builds to a real heart breaking moment which actually really worked even though I thought I was over these sort of moments. I hope the series can recreate this on a more consistent basis going forward.
It was really nice to see a different side of the characters during the campfire scene as we start to see them actually relax and make jokes with each other. Seeing the characters poke fun at Luke and Jane after their “encounter” from last episode was great to see as it is how a group of friends would react in that situation. Seeing their more human side you can relate to rather than just the constant battle for survival goes a long way in making the supporting cast more than just zombie food but fully fleshed out characters.

One interaction I thought really worked in this episode was that between Kenny and Arvo. The age of Arvo meant he was young enough to still be deemed a kid by some but also old enough, in a world where you have to grow up fast, that he could still be punished for his actions. It is classic Telltale; putting you right in the middle of a dilemma and forced to pick sides or stay out of it. I wanted to give Arvo the benefit of the doubt but as his actions became increasingly dangerous to the group I immediately switched to Kenny’s way of thinking and wanted nothing more to do with the boy.
One small criticism which surprised me playing this episode was how some dialogue choices felt really flat, especially from Clementine. The voice acting throughout is usually so incredible and I’ve never had an issue before; but there were a few times when my selected option was just said with no meaning or gravitas. Especially when the situation called for it. This could be a problem of having to record so many different dialogue options that some ‘first takes’ may slip through the cracks occasionally but it did slightly kill the momentum from what is usually some of the best VO in the medium. 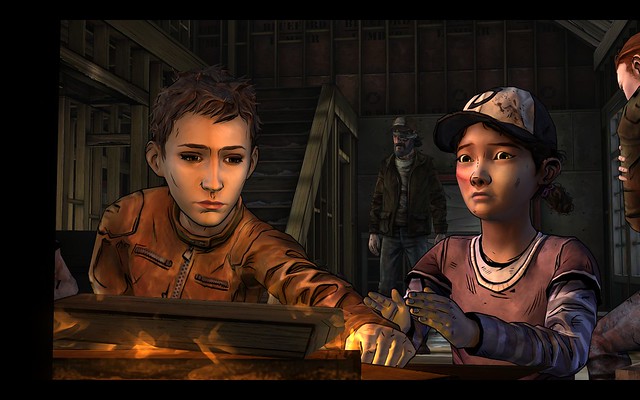 Things slowly progressed along to where you know it will end up, and you also know you will be forced to make a incredibly important decision. It is in that impending doom that really makes what happens on screen really uncomfortable. The final moments can really be played out in so many ways and all of them are so well done that I’m glad I went through and redone them a few times to see the different outcomes. Even if in the end I still am satisfied with my first choice in the situation.
Of course without spoiling anything I found the way the ending was approached to be very fascinating and extremely ambitious by Telltale. This is possibly the biggest divergent of paths we've ever seen and your choices in the final moments completely changes where and who you ultimately end up with. Of course certain actions at the start of Season 3 can easily pull everyone back to a similar track but I really like how players will truly have their own ending to this chapter in the story. This is what makes these games great and we really have lacked it during the season but its great to see it back when it matters.

One thing I noticed is whether we have had an episode yet when not one of your group dies? Usually we meet new people and others die in every episode which is what made me start to not care about anyone’s fate as they all end up in the same place. I would love to see Telltale have the nerve to maybe try a few episodes in a row where no one of the group is killed off. It would certainly go a long way to solving my criticism of a too disposable cast and make the deaths all that more shocking.
I’m not entirely sure where the series will go from here. I already have a few theories but I may get to them another time before The Walking Dead: Season 3 drops. My concerns haven't completely evaporated involving the almost too disposable cast and invincible protagonist, but I definitely feel more inclined to continue the story than I was after Episode 4. The big moments felt as strong as those of the series’ past; and one emotional moment in particular was phenomenally well done that I am still thinking about it many hours on. We know that the series will continue for at least another five episodes and I really hope Clementine’s story continues to progress as we really are seeing one of the great video game protagonists on our screens.
Rating
9.0
Pros